Interesting structural properties of auricin and its biosynthetic gene cluster

Streptomycetes belong to the main producers of secondary metabolites with a broad range of biological activities. A large number of these products belong to polyketides. These structurally diverse compounds are synthesized by a repeated decarboxylative condensation from acyl-CoA precursors by a polyketide synthase (PKS). Three types of PKSs are known, with type II being responsible for the biosynthesis of aromatic polyketides. The minimal type II PKS contains α and β subunit of ketoacyl synthase (KS) and acyl carrier protein (ACP). Additional PKS subunits, including ketoreductase (KR), aromatases (ARO), and cyclases (CYC) modify the nascent chain to form a cyclic polyketide, which is subsequently modified by tailoring enzymes playing an essential role in dramatic diversity and biological activity of resulting polyketide. Although a large repertoire of aromatic polyketides was identified, they all belong to just a few common structural types that include pyronaphthoquinones, tetracyclines, angucyclines, anthracyclines, tetracenomycines, aureolic acids, and pradimycin-type polyphenols (Fig. 1A). Angucyclines form the largest group of aromatic polyketides. They feature a tetracyclic benz[a]anthracene skeleton and have a broad range of biological activities. Their biosynthesis differs from that of other aromatic polyketides by the action of a specific CYC, which closes the fourth ring of the polyketide in an angular orientation. 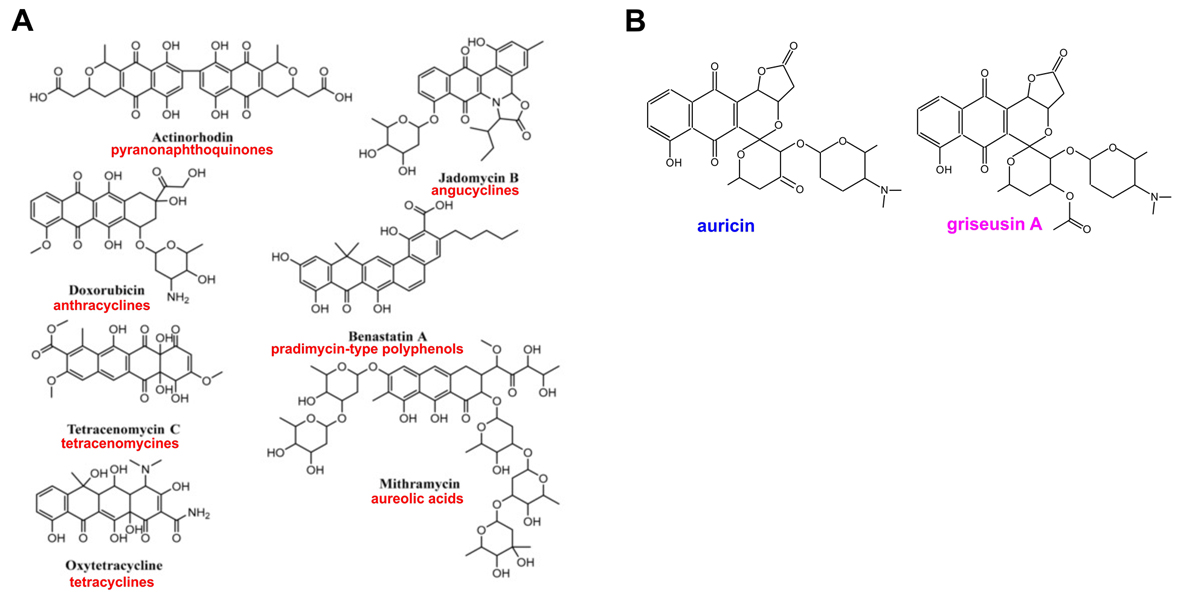 Fig. 1A. Structural types of aromatic polyketides and their representatives from streptomycetes. B Structure of auricin and griseusin A.

We identified the aur1 gene cluster in Streptomyces lavendulae subsp. lavendulae CCM 3239. Its complete sequence revealed its unusual organization. It consists of a central region (aur1A-aur1N), containing the biosynthetic genes for polyketide aglycone that were highly similar to the angucycline genes. However, a number of auricin-specific tailoring biosynthetic genes have been scattered up to 30 kb from this central region (Fig. 2A). The cluster was responsible for the production of antibiotic auricin, active against Gram-positive bacteria. In addition, it also displays modest cytotoxicity against several human tumor cell lines. Interestingly, auricin is transiently produced in the narrow time interval upon entry into the stationary phase and is subsequently degraded to inactive metabolites due to its instability at high pH achieved after the production stage. This unusual pattern of auricin production results from its complex regulation, which involves several cluster-situated regulators. 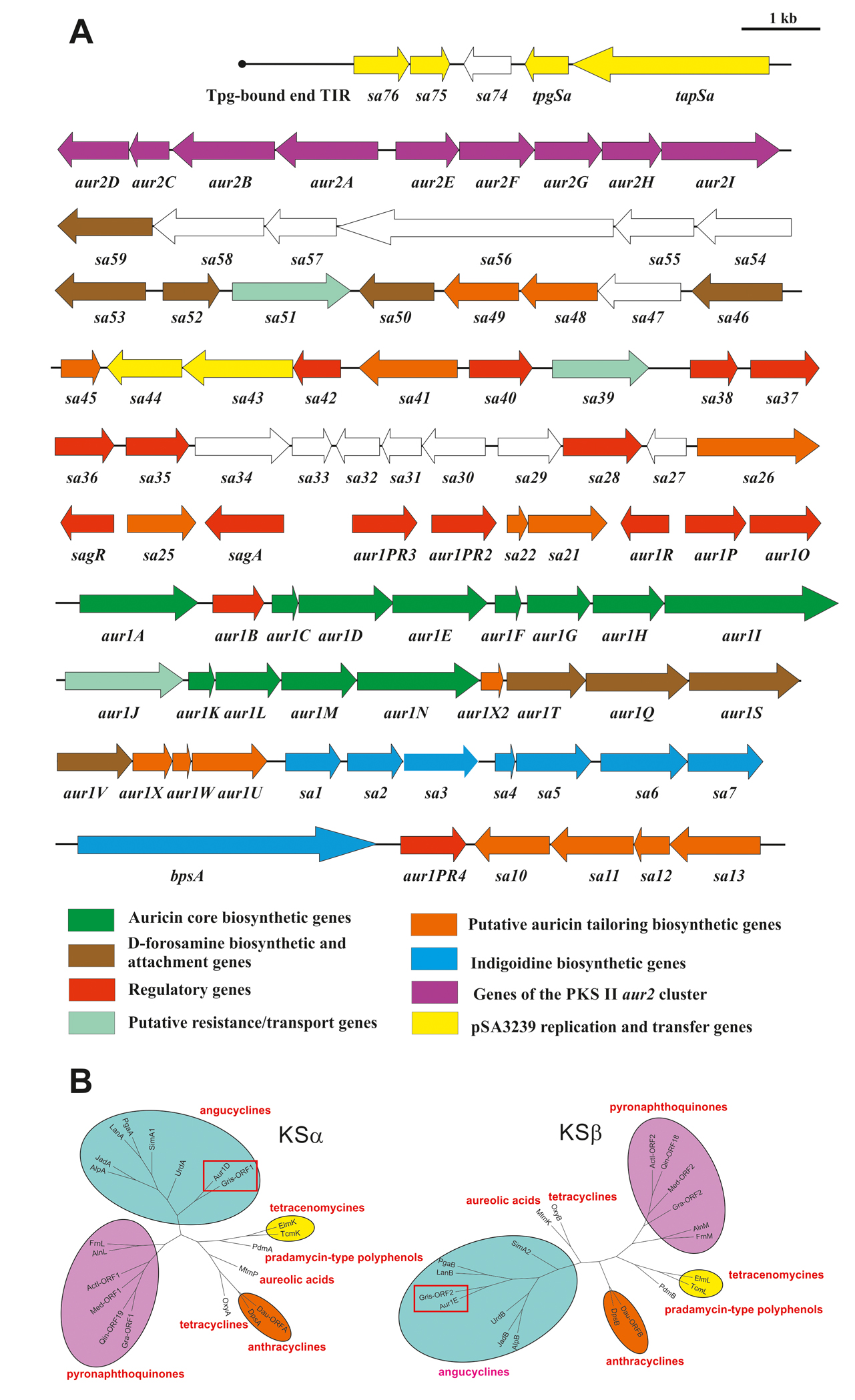 Fig. 2A. Genetic organisation of the auricin aur1 cluster and its adjacent regions. Each thick arrow denotes the direction of expression and the size of the gene. Details of individual genes and their products are provides in Genbank Acc. No. KJ396772. B Phylogenetic trees of the ketosynthase α (KSα) and ketosynthase β (KSβ) involved in the biosynthesis of representative groups of aromatic polyketides. KSα and KSβ for griseusin A and auricin are in red box.

Auricin structural analysis revealed that it possesses intriguing structural features, distinguishing it from all other known angucyclines. It is modified with d-forosamine and contains a unique aglycone similar to the griseusin-like spiroketal pyranonaphthoquinones (Fig. 1B). The central part of the aur1 cluster contains the initial biosynthetic genes aur1CDEFGH, which are homologous to the angucycline genes encoding CYC, KSα, KSβ, ACP, KR, and ARO, respectively. In addition, the organization of these genes, including the angucycline-specific CYC gene aur1C, is strictly conserved in all angucycline clusters. Deleting the central core region of aur1 cluster results in the absence of auricin, thus clearly confirming its role in auricin biosynthesis. Only one partial biosynthetic gene cluster (gris) for the biosynthesis of griseusin A in S. griseus K-63 has been identified. Interestingly, it is highly similar both in its gene organization and encoded proteins to the core aur1 gene cluster. A phylogenetic analysis of KSa and KSb localized both key biosynthetic proteins for griseusin and auricin to the angucyclines clade and not the pyranonaphthoquinones clade (Fig. 2B). Some of the biosynthetic genes in the aut1 cluster are similar to pyranonaphtoquinones biosynthetic genes and are under the control of auricin-specific positive regulators. They can therefore participate in auricin biosynthesis and may be responsible for this intriguing structure. Consistent with the interesting structure of auricin, this suggests a unique and as yet undescribed mechanism of auricin biosynthesis through two overlapping biosynthetic pathways, for angucyclines and pyronaphthoquinones.

This work was supported by the Slovak Research and Development Agency under the contracts No. APVV-19-0009.