Over five billion dollars are spent annually in the United States to control acid reflux symptoms, such as abdominal and/or chest pains, acid regurgitation, coughing and others. The article by Hubbard and Demos (2016) presents three unusual patients complaining of inability to eat, severe malnutrition, difficulty swallowing (Fig. 1A), and bloody vomiting (Fig. 1B).  Barium examination revealed unusual diverticula (small pockets) confined in the wall of the esophagus, the organ connecting the throat with the stomach. 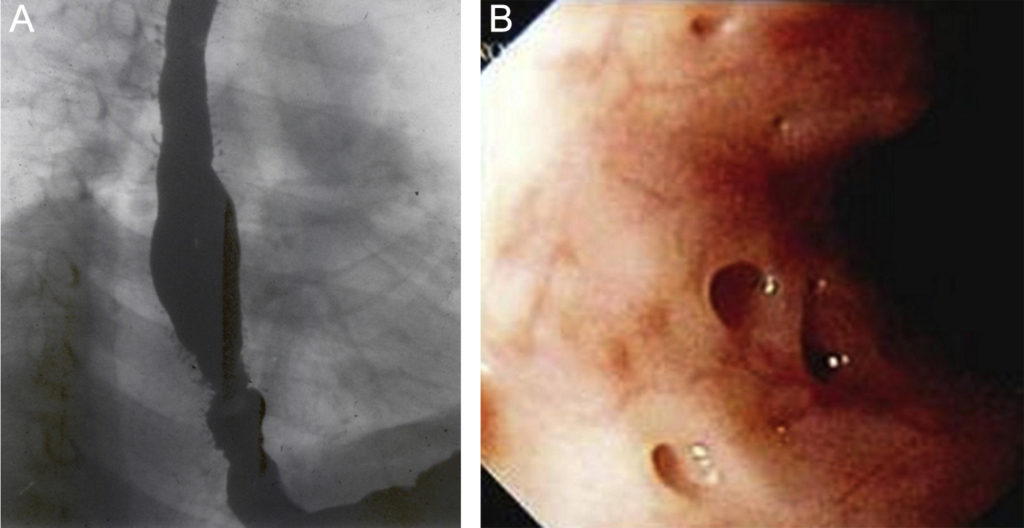 Two of the three patients also had hiatal hernia (part of the stomach protruding inside the chest from the belly).  This finding is responsible for allowing acid stomach juices to regurgitate into the esophagus and mouth and the lungs, thus creating most of the symptoms. Drug therapy had not controlled the symptoms.  Surgery controlled symptoms in two patients, one is a follow up of fifteen years in a 57 year old patient and in a six month follow-up of a 6 year old boy.  The third patient left the hospital before surgery against medical advice.

While only a few hundred patient with intramural esophageal diverticula have been reported in the literature, they are thought to result from acid reflux.  This reflux from the stomach to the esophagus is responsible for causing pains, repeated regurgitation into the lungs causing repeated pneumonia, asthmatic attacks, sore throat and even destruction of the teeth.

Even after neutralizing the acid with medicines, the rest of the stomach juices are regurgitated because of the presence of hiatal hernia.  Long term acid reflux for many months or years may lead to a dreaded complication of cancer of the esophagus.  Surgical removal of the cancerous esophagus saves only 15-18% of patients.  On the other hand, surgical correction of acid reflux will give a cure rate of over 95%.