Investigating the neural mechanisms of speech: an electrophysiological study

Speech is a vital component of how humans communicate to one another, yet how the brain processes this action is not fully understood. In order to properly diagnose and treat speech disorders, it is important to first understand the mechanisms underlying proper brain function. Strictly regarding speech, the frontal lobe of the brain is responsible for language, and the temporal lobe, located on the left and right side of the head, is responsible for listening. This study investigated how the frontal and temporal lobes coordinate with each other to produce speech.

In this experiment, we were fortunate to have the opportunity to record data directly on the surface of the brain from five male patients undergoing surgical treatment for epilepsy. A total of 32 electrodes were placed over the frontal lobe and 96 over the temporal lobe. On all subjects, the electrodes were located on the left hemisphere of the brain. After the patients recovered, brain activity was collected while patients spoke the word, “Ah”, repeatedly. Subsequently, brain activity was recorded while the patient listened to a recording of these same vocalizations through headphones. This part of the experiment was important in order to identify differences in brain activity during speech and listening.

Using the collected data, we performed time-frequency analyses across brain regions. In other words, we used complex mathematical relationships to visualize the composition of brain waves, or frequencies, as they occurred throughout vocalization and listening. During speech, different types of neurons in the brain fire at different rates in order to accomplish a task. An electrode on the surface of the brain can detect voltage differences created by a large sum of neurons. In addition to this analysis, we were able to superimpose the resultant graphs of brain activity onto a 3D-rendered image of a human brain based on MRI scans from the five subjects. This allowed for the results to be understood in a more comprehensive and intuitive manner. 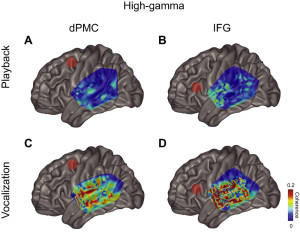 During our analysis, we found an exciting, novel result: In addition to low-frequency activity, we observed high-frequency activity between the left frontal and temporal lobe during the onset of human vocalization that is significantly stronger than listening to these same vocalizations. More specifically, this activity is between 70 and 150 Hz, or peaks/sec. We call this frequency range the “high-gamma band”. We also observed low-frequency, or “theta band”, activity (4-8 Hz) between these two brain regions, which has been shown in previous studies.

This new finding may help provide insight to the complex mechanism that is human speech. This frontal-temporal lobe connectivity implies that the lobes are functionally connected during speech. As more researchers discover additional electrophysiological findings, human speech disorders can be diagnosed and treated in a more accurate and confident manner, leading to more successful patient outcomes.