Is apolipoprotein C3 always bad for your health?

Apolipoprotein C3 (APOC3) is a small protein of blood, produced by liver and intestine. Our knowledge of APOC3 functions in relation to human health and disease remains limited, albeit human Apoc3 gene nucleotide sequence was identified more than 30 years ago. The most widely accepted function of APOC3 is the regulation of plasma triglyceride levels by inhibiting lipoprotein lipase (Lpl) activity. Lpl is the enzyme responsible for the release of free fatty acids from triglycerides, a required step for the efficient removal of triglyceride-rich lipoproteins from blood. As a result, increased levels of APOC3 result in elevated blood triglycerides, a condition also known as hypertriglyceridemia. Based on this function, silencing antisense oligonucleotides targeting Apoc3 expression are currently tested in clinical trials for the treatment of hypertriglyceridemia and its related pathologies. 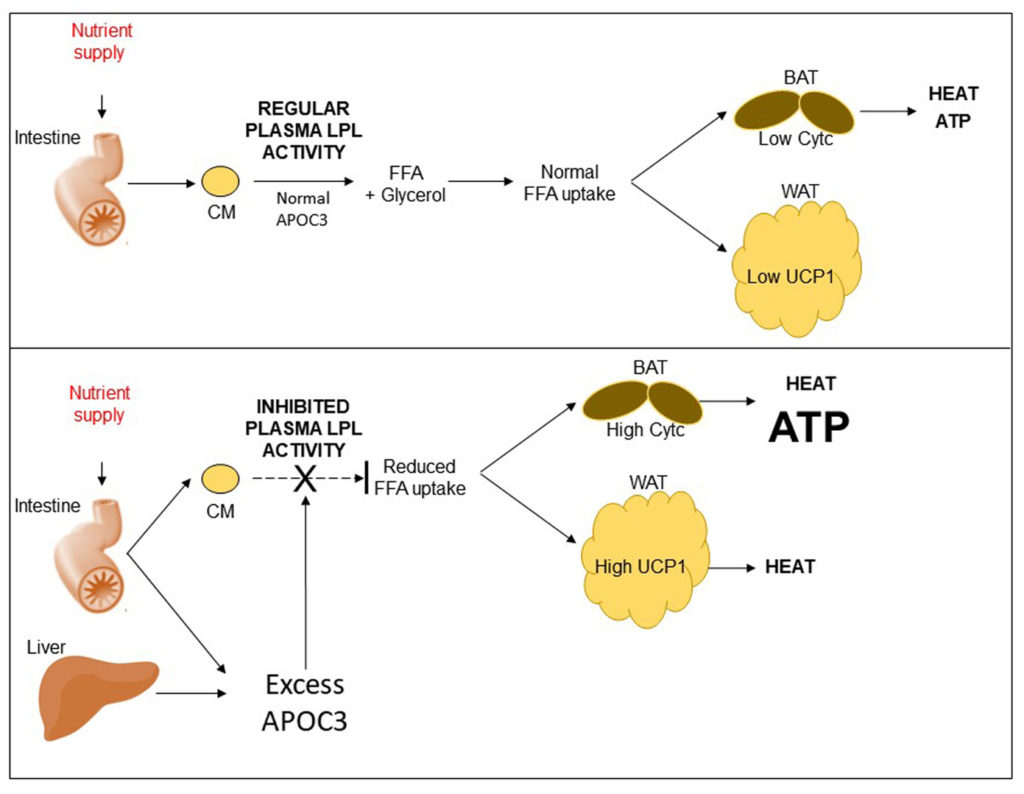 Fig. 1. A simplified depiction of the effects of normal (top panel) and excess (lower panel) APOC3 on peripheral management of dietary lipids and their conversion into energy.

In a clinical study involving bariatric subjects we reported that markedly increased levels of plasma APOC3 correlate with the obese phenotype. Of note, six months after bariatric surgery, when patient’s body mass index (BMI) was drastically reduced, APOC3 was barely detectable in their blood. Approximately half of blood APOC3 is bound to high density lipoprotein (HDL), an intriguing lipoprotein that attracted the attention of biomedical community, mainly due to its important role in atheroprotection.

To better understand the relation of APOC3 expression to obesity and adipose tissue metabolic activity, in another recent study we employed adenovirus mediated gene transfer of human APOC3 to wild-type C57BL/6 mice. To our surprise, in contrast to the current predominant view that elevated levels of APOC3 are detrimental to human health, we found that this protein also possesses some quite beneficial properties, which should not be ignored in the designing of new pharmaceuticals aiming at blood APOC3 reduction.  Specifically, we found that along with the expected inhibition of Lpl-mediated lipolysis of plasma triglycerides, APOC3 stimulated mitochondrial metabolic activity in BAT towards ATP production. Our findings raise the interesting possibility that the increased APOC3 levels observed in the blood of morbidly obese subjects may not represent a cause of obesity but rather a protective mechanism triggered in response to nutrient surplus, aiming at protecting adipose tissue from nutrient overload. It is possible that under conditions of excess triglyceride accumulation in adipose tissue, APOC3 blocks further delivery of free fatty acids to this tissue by inhibiting plasma Lpl, while at the same time it increases BAT mitochondrial metabolic activity by burning fat into energy. As a result, APOC3 appears to be a critical regulator of processes associated with peripheral management of dietary lipids and their conversion into energy, maintaining a balance between tissue lipid uptake and catabolism (Fig. 1).

APOC3 is a typical example of the ancient Greek saying “μέτρον άριστον” which translates as “everything in moderation”. Reducing APOC3 levels to physiological by pharmacological means may be beneficial for the treatment of some forms of hypertriglyceridemia, however complete inhibition of its expression may increase triglyceride accumulation in fat, leading over time to obesity.