Chromatin remodeling is active critical process during embryonic development and in cellular malignancies such as cancer. Chromatin is the highly condensed form by which the genomic material (DNA) is packaged in the cell nucleus. The fundamental subunit of chromatin, the nucleosome, is composed of ~146bp DNA wrapped around histone octamers (two copies of each of four core histones, Histon2A, Histone2B, HistoneH3 and HistoneH4). The linker Histone H1 connects nucleosomes to further facilitate the compaction/packaging of genomic materials in cell nucleus. Genes embedded in condensed chromatin require structural conformational changes for activation/repression during specific cellular and developmental processes. 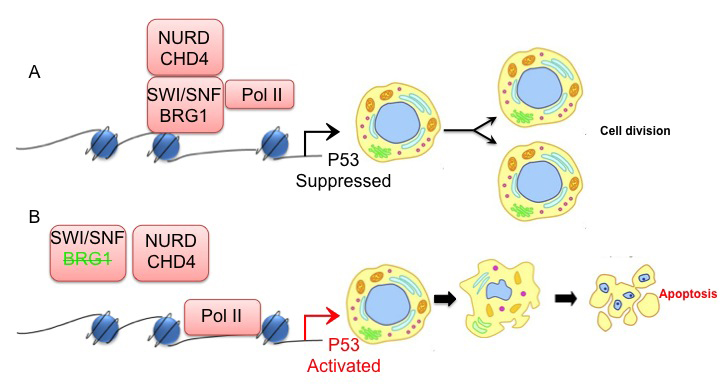 In wild type embryos, basal expression of p53 is regulated in part be catalytic enzymes of the SWI/SNF and NuRD chromatin remodeling complexes to allow normal cellular growth (A). Ablation of the Brg1, the catalytic subunit of the SWI/SNF complex, in embryos lead to increased p53 expression and the activation of genes downstream of the p53-pathway resulting in reduced proliferation and induced apoptosis in development (B).

Mammals possess four major chromatin remodeling complexes SWI/SNF, ISWI, NURD, and INO80 stem. Among these complexes, SWI/SNF complexes are well studied and play vital roles in a variety of physiological functions including development, metabolism, immune function, and reproduction. The SWI/SNF complex is ~1.5-megadaltons and comprises 10-15 subunits. Brg1 (Brahma related gene 1) and Brm (Brahma) are the mutually alternative catalytic subunits of the SWI/SNF complex, which utilize the energy of ATP hydrolysis to move or exchange nucleosomes. The “complex” that remodels the chromatin structure in specific context has yet to be discovered. One particular area where Dr. Singh in the laboratory of Dr. Trevor Archer at NIEHS/NIH has concentrated over the past several years is identifying specific functions of the SWI/SNF complex that regulates chromatin dynamics and gene expression in development and cancer.

The simultaneous manifestation of rapid processes cell self-renewal, proliferation and differentiation are required for the formation of multicellular organism, and cancer cells acquire similar phenomena. Similarly, programmed cell death is integral aspect of various processes of development and removal of abnormal and overproduced cells. However, abnormal timing, amount or localization of cell death leads to abnormalities or death of embryos. Several transcription factors and signaling pathways regulate cell proliferation and trigger cell death. However, the molecular mechanisms that control cell death in embryos are not well understood.

A recent research study published by Singh et al. showed chromatin remodeling is required during embryogenesis. Using state of the art, genetic loss of function approach in mouse model, temporal deletion of chromatin-remodeling factor Brg1 in early embryos result developmental arrest and mortality. We observed Brg1 protein is strongly and ubiquitously express in early embryo and its expression persisted with developmental time that culminates in the form of morphological changes. This finding led us to hypothesize that Brg1 is a global regulator and might be essential in embryos across development. Then we tested our hypothesis that global deletion of Brg1could affects embryonic growth. Brg1 deletion in embryos caused retarded growth and elevated cell death.

In conclusion, our study suggests that chromatin remodeling is integral in response to the rapid process of early embryonic development. We demonstrated a novel molecular mechanism of Brg1-mediated regulation of gene expression into higher need of cell proliferation and limitation of inappropriate cell death during development. Finally, the findings of our study of cell death in embryos will help scientists/clinicians understand its function in a variety of diseases including cancer.