Overweight and obesity have become a major burden in modern society due to the detrimental effects of excess body weight on various health outcomes, including cardiovascular disease and cancer. It is commonly assumed that overweight and obese people just consume too many calories and that a reduction in food consumption, particularly energy dense foods will solve the obesity problem. 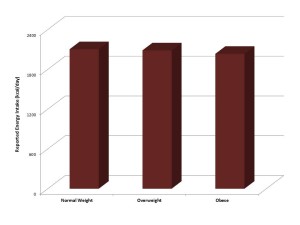 A study by Drenowatz et al. examined the association between dietary intake, physical activity and weight status in 430 young adults. Body weight and height were measured according to standard procedures. Subsequently, Body mass index (BMI) was calculated and used to classify participants into normal weight (BMI less than 25), overweight (BMI between 25 and 30) or obese (BMI greater than 30)  Physical activity and energy expenditure were assessed with a multi-sensor device over a 10-day period. Dietary behavior was estimated based on multiple 24-hour diet recalls administered over a 2-week period.

Results of the analyses showed that energy intake does not differ between normal weight, overweight and obese participants. Considering the larger body size, overweight and obese adults actually consume fewer calories than their normal weight peers. Overweight and obese participants also have a lower energy expenditure relative to their body weight, which is attributed to lower amounts of physical activity. On the other hand, excess body weight is associated with higher amounts of sedentary behaviors. Taken together, these results suggest that low levels of physical activity, rather than high energy intake, are key contributors to excess weight gain. 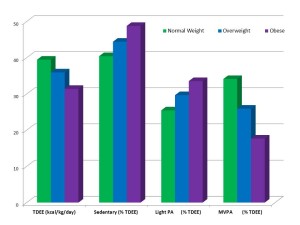 Despite the benefits of physical activity, caloric restriction (i.e. going on a diet) remains a popular choice regarding weight loss. Even though dieting will allow you to lose weight in the short term, success rates regarding, people generally struggle to maintain their lower body weight for a prolonged period of time. This may in part be attributed to the difficulty in keeping up with dietary restriction in our society, where food is readily available. Further, diet-induced weight loss has been associated with a reduction in physical activity, which, as mentioned previously impairs the regulation of energy intake in the longterm. Diet induced weight loss is also associated with a loss in muscle mass, which leads to lower energy expenditure at rest (resting metabolic rate). Resting metabolic rate, however, contributes between 50 and 75% to total daily energy expenditure. Even though dietary intake needs to be considered regarding overall health and well-being, ensuring adequate physical activity needs to be one of the primary foci in the promotion of weight loss and weight management.