Is milk and meat from the offspring of a bull genome edited to have no horns safe to eat?

Horns on cattle are an animal welfare and human safety concern, but most high producing dairy breeds grow horns. Introducing the polled (hornless) trait into the dairy population by crossbreeding would also introduce non-productive traits by linkage drag. The fastest and most effective way to introduce the dominant PC POLLED allele is by genome editing (GnEd) elite dairy bulls to introduce the trait. Risk assessments of genetically modified animals historically require evaluating animal health and whether food products are safe and nutritious. Thus, we gathered empirical data on the health, growth and nutritional composition of animal products from six polled offspring of a GnEd bull homozygous for the PC allele. 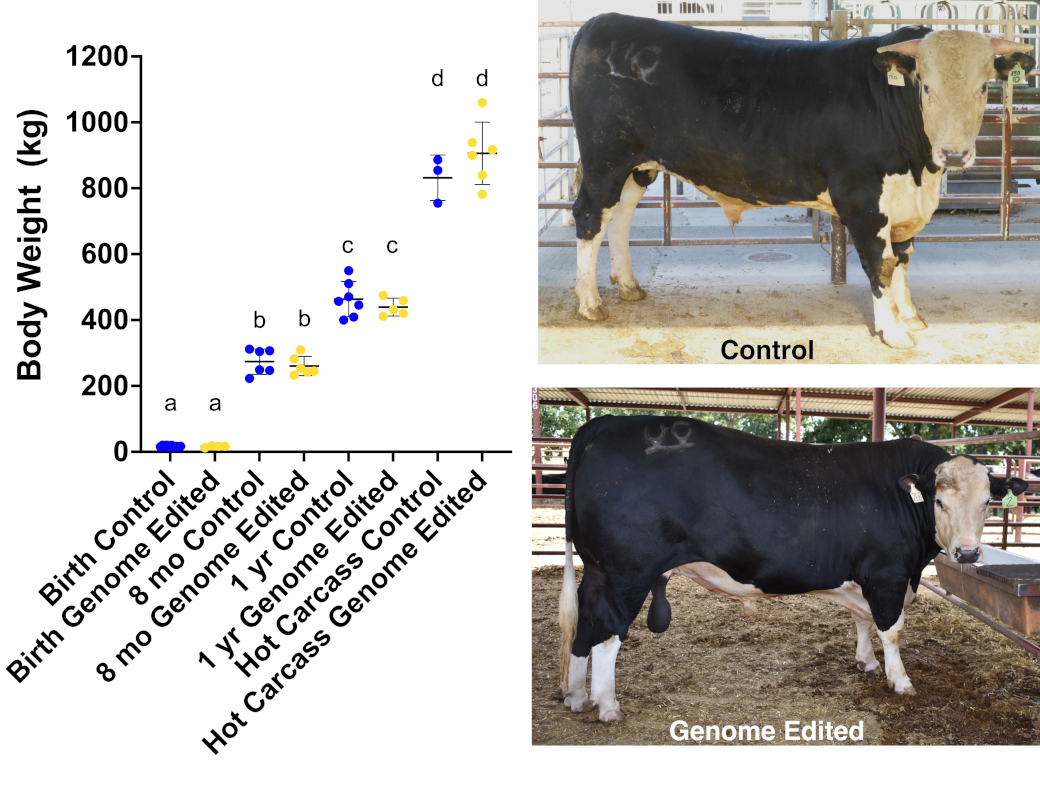 Fig. 1. Weights of heterozygous hornless offspring of a genome edited (GnEd) bull (RC; n=5-6) compared to contemporary horned Hereford and Hereford x Holstein (HO1) controls (n=3-10). Data are the weights of each animal with means +/- SD. a,b,c,d Different letters indicate significant differences (P < 0.0001). Images of a control (HO1.calf1) bull, and an offspring of the GnEd bull (RC.calf2), captured just before slaughter. There was no difference between the weights of the two groups at each time point.

Six offspring of the GnEd bull did not differ in their growth compared to contemporary controls cattle, and veterinarians conducting physical examinations (1 week, ~8 months and ~12 months) found no abnormalities. All blood parameters at 1 week, ~8 months and ~12 months of age of these cattle were all within the ranges of healthy controls of equivalent ages, except for elevated creatine kinase found in all experimental cattle at ~12 months of age.

All nutrient values (proximate nutrients, minerals, vitamins and 18 amino acids) for sirloin cap, chuck arm and tri-tip collected from polled offspring of the GnEd bull, the GnEd bull himself, and HO1 control comparator offspring were within the range of values found in the literature for raw beef composition across 37 countries (Fig. 2).

The nutrient values for milk collected from the single female offspring of the GnEd bull from weeks 1-4 of lactation and from 4 control cows were all within the range of values found in the literature for whole milk, except % sulfur (data not shown). There were differences between all cows (P<0.0001) for all nutrients measured, irrespective of whether the milk was derived from conventional cows or from the offspring of the GnEd bull. Likewise milk nutrient levels also varied from week to week. Such variability is well known to occur during the lactation cycle of dairy cattle, and does not pose a food safety hazard. 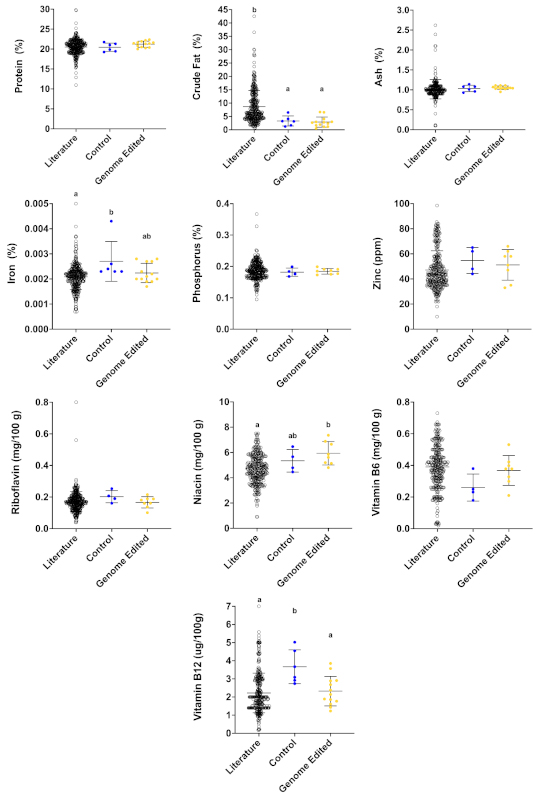 It has been proposed that the compositional assessment of genetically engineered animals should follow a stepwise approach to determine what, if any, compositional data generation is necessary. If traits are designed to affect or regulate biochemical pathways and cascades, hypothesis-driven compositional studies looking at affected pathways might well be warranted. The list of compositional analytes that pose a potential human food safety hazard should be based on a hypothesis generated by the nature of the trait being introduced.

The PC Celtic POLLED allele in this study had no novel “expression product” (i.e. protein) to assess for toxicity, bioactivity, and/or allergenicity. Absent a hypothesized hazard, requiring the measurement of animal health parameters and food product composition of GnEd animals & conventional counterparts grown and bred under the same husbandry conditions adds considerable costs to GnEd livestock research and provides little useful data for risk assessments. These data suggest regulatory animal product composition studies should be occasioned only by unique novel product hazards hypothesized to result from any biochemical pathways targeted by the intended alteration, and be hypothesis-driven and risk-based, rather than triggered solely by the use of modern biotechnology in the production of the animal.

There are no obvious risks uniquely associated with GnEd animals that could have been achieved using conventional crossbreeding that would necessitate additional animal health and food safety studies, beyond those growth and heath observations that are typically carried out for the selection of conventionally-bred animals.  Such observations are used to select the best animals to move forward in animal breeding programs.