Is the ACTN3 gene a real “speed gene” in horses?

The ACTN3 gene encoding α-actinin-3 in humans is considered to be a key factor in determining the predisposition to short- or long-term exercise (sprint or endurance). In addition, mutations within it are used for commercial genetic tests to assess the athlete’s predisposition and the optimal selection of training. But can we also use it to determine the sport predisposition of horses?

The role of the ACTN3 gene has been extensively studied in humans, making it possible to determine its influence on the exercise-related phenotype. The sequence change present in the gene, located in the R577X position or its absence, has a significant impact on the individual’s predisposition to short and fast or long-distance runs. This polymorphism occurs in a large proportion of the population and is deficient in the α-actinin-3 protein. R577X is a single nucleotide polymorphism (SNP) that directly changes the properties of the muscle fibers. They become durable and resistant to fatigue, and this phenomenon is commonly called the “speed gene”. 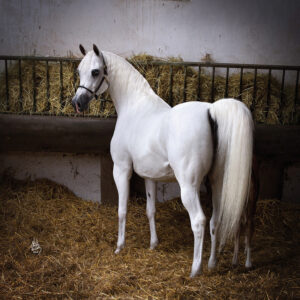 The interest in the ACTN3 gene in athletes led to its analysis also in other species, including horses. These animals are evolutionarily adapted to exercise and are an excellent model of how the body adapts to exercise and training.

In order to better understand the importance of polymorphisms in the ACTN3 gene, the analyzes were carried out on several races differing in terms of phenotypes, origin and functional traits:

Previous studies allowed the identification of two SNPs which can potentially affect the transcription process of the ACTN3 gene – one in the promoter region (g.1104G>A) and one in the 19th exon located near a splice region in the junction between the 18th and 19th exons (c.2334C>T).

The genotyping of the g.1104G>A polymorphism showed significant differences in genotype and allele frequencies across the analysed breeds. The three native and coldblooded breeds were characterized by the predominance of the AA genotype and the low number of GG horses. The lowest number included animals with the GG genotype in both native Polish koniks and Hucul horses (1% and 1.9% respectively). The opposite genotype distribution was detected in noble breeds: Arabian and Thoroughbred for which GG horses accounting for 47.7% in both populations. In TB horses, no AA horses were identified. The analysis of allele and genotype distribution confirmed the significant differences between light breeds and other breeds.

The analysis of the c.2334C>T allele and genotype distribution showed less variation between the investigated breeds than the g.1104G>A polymorphism. A similar genotype frequency was identified for Polish koniks and Thoroughbreds. For Hucul horses, three genotypes were also identified; the most abundant were heterozygotes. In the Polish coldblood population, only CC and TC horses were identified. For most breeds, a higher frequency was detected for the CC genotype (from 86.6% for PKZ to 42.6% for Hucul horse). The opposite genotype frequency was observed in the Arabian horse population, where CC horses accounted for 2% of all horses. 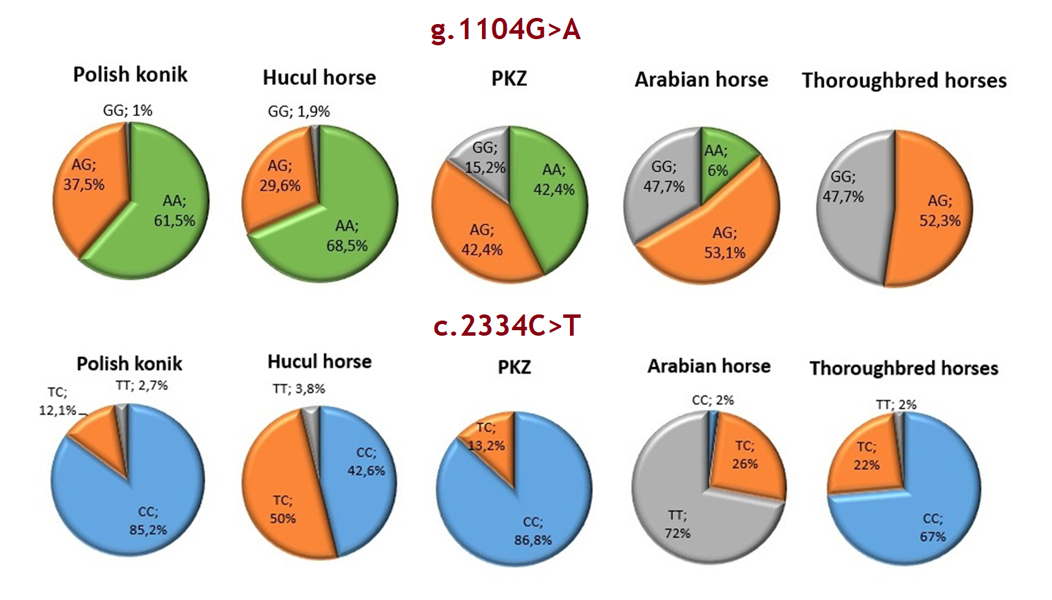 So can we say that ACTN3 is a ”speed gene” in horses?
It’s possible but not confirmed. The significant differences in genotype frequencies may indicate that ACTN3 gene is of great importance in the predisposition to short- or long-term exercise but further research is needed to confirm the association of both polymorphisms and exact racing results.