While in water-adapted vertebrates (anamniotes: fish and amphibians) organ regeneration is relevant or outstanding, including in fins or limbs, in fully terrestrial vertebrates (amniotes: reptiles, birds and mammals) regeneration is absent or rare. Aside numerous anatomical and physiological adaptations to life on land, the improvement of the immune system preserves the self biological identity and is essential against microbial infections and cell mutations including those leading to cancer. The capacity to discriminate between self and not-self molecules, the immune tolerance, is acquired during late stages of development and the initial phase of life.

However, the definitive immuno-competent cells (lymphocytes) of the adult may have lost the ability to recognize as self-antigens those present during early stages of development. Therefore a negative side-effect of the immune system in adult amniotes may be the elimination of embryonic cells derived from organ damage or loss, cells that are needed for organ regeneration but appear no more as self. Frog tadpoles with an immature immune system possess broad regenerative capability but loose it as they turn terrestrial during metamorphosis when their immuno-competence is enhanced. Reptiles, birds and mammals have evolved a process of scarring which rapidly seals off wounds impeding organ regeneration, including in the limb and tail.

Lizards are the only amniotes with an efficient immune system above 25-27°C, where a large organ, the tail, regenerates (Fig. 1A). The new tail contains numerous tissues, including a large mass of muscles, cartilage, nerves, a simplified spinal cord and fat deposits (Fig. 1B). However limbs and digits cannot regenerate or they form scarring outgrowths after amputation (Fig. 1A, C). Fibroblast Growth Factors (FGFs) are present in the regenerating tail blastema (Fig. 1D) and the administration of FGFs rescues cartilaginous tibia, fibula and femur and stimulates cell proliferation in the amputated limb (Fig. 1 E-G, 2 A). No digits have been induced but the recent acquisition of molecular data on regenerative genes activated during tail and limb regeneration in lizards foster some hope for human regenerative medicine. In fact, the successful (tail) and unsuccesful (limb) regeneration in two different regions of the same lizard has been recently analyzed in order to detect key genes explaining these differences. 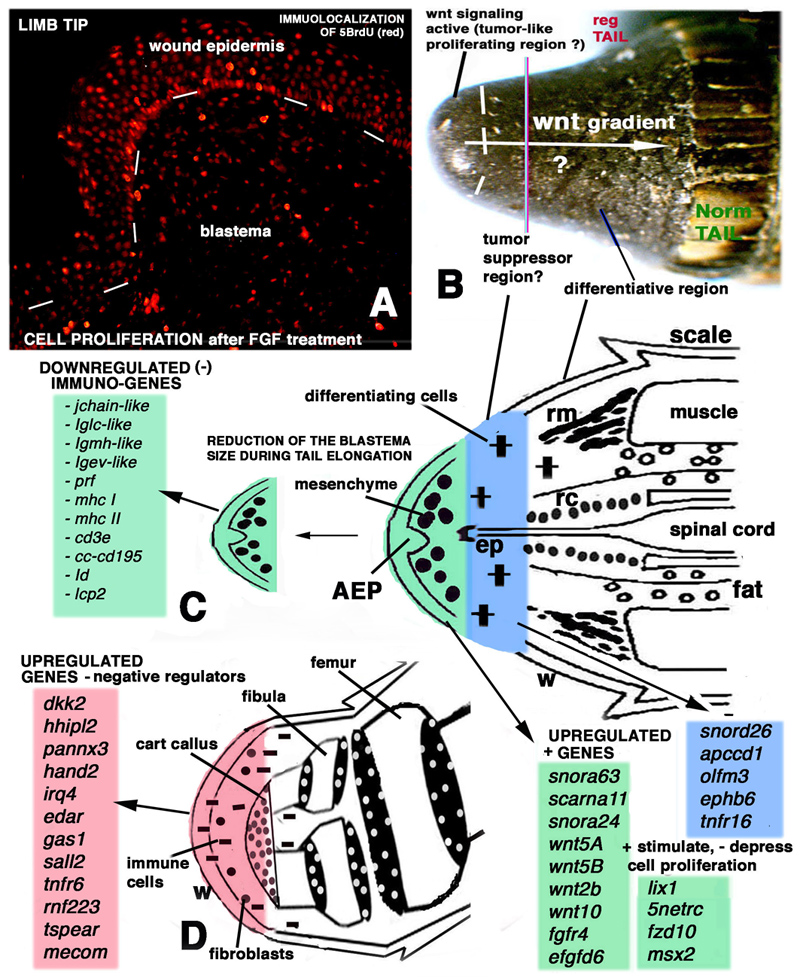 In contrast to the tail, the amputated limb elicits a strong inflammation and the damaged tissues are invaded by immune cells that impede the formation of an Apical Epidermal Peg (AEP), the apical epidermal micro-region that likely sustains regeneration in the tail (Fig. 1 B, D). The transcriptome analysis, a technique that detects all expressed RNAs in an organ, has identified 76 uniquely over-expressed genes in early regenerating tail (blastema) that are instead absent in the scarring limb. Key regenerative genes expressed in the regenerating tail mainly belong to the Wnt-signaling pathway and to small-nuclear RNAs­ (snoRNAs). Their specific role in regeneration however remains to be discovered. Wnt-genes are highly expressed in many tumors while snoRNAs intervene in the synthesis of ribosomal-RNAs involved in cell proliferation. Other genes are negative regulators of proliferation (tumor suppressors) and probably are activated in non apical regions of the tail where cells differentiate in the new tissues (Fig. 2 B, C). In the limb 39 genes code for inflammatory proteins and Wnt antagonists that contrast organ growth (Fig. 2 D). While the tail silences most immuno-genes and cell function genes (78 genes), the limb instead express immuno-genes but down-regulates those for muscle regeneration and cell function (42 genes). Lizard regeneration provides information for regenerative medicine on the key genes promoting organ regeneration also in humans, indicating that genes for cell proliferation and its control act in immuno-suppressed, embryonic-like conditions.