L-amino acids, key for the evolution of life came from extraterrestrial space?

All proteins, which are functional molecules of living creatures are made by combining 20 kinds of amino acids. Except one amino acid, each amino acid has two forms (isomer) named D (dexer meaning right) and L (meaning left). D-amino acid is a mirror image of L-amino acid. Isomers that are mirror images of each other are called enantiomers and L- and D-amino acids are not superimposable like right and left hands. For people who wish to understand enantiomer more deeply, chemical explanation of amino acid is shown in Figure 1. 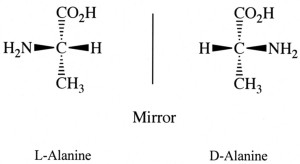 It is established that amino acids are generated in the prebiotic earth from simple molecules such as methane, water, ammonia, and hydrogen by so called chemical evolution. Ordinary chemical synthesis of amino acids always generates a racemic mixture (a mixture of the same amounts of L- and D-amino acids), because enantiomers have identical chemical properties. To prepare L-amino acid alone, we need a special method utilizing asymmetric chemical like an enzyme consisting of only L-amino acids.

The question is how L-amino acid is generated or how enantiomeric excess (the quantity of L-amino acid becomes more abundant than that of D-amino acid) is attained before the evolution of enzymes (living creatures). No reasonable hypothesis had been available until we reported that a mixture of racemic amino acids causes spontaneous and effective resolution by itself during recrystallization in the presence of excess racemic asparagine (one amino acid), even if asymmetric synthesis of a single amino acid has never occurred without the aid of an asymmetric molecule. However it was incidental whether the mixture became L- or D-rich.

Recrystallization process is as follows. In boiling water, compound A was dissolved to fully dissolve A, thus making a saturated solution. The solution is then allowed to cool to decrease the solubility of A and a part of A, which cannot dissolve in the water precipitates as crystals.

Based on our experiment the scenario of L-amino acid generation is as follows. Racemic amino acids including D,L-asparagine (D,L- denotes a racemic mixture) were formed by chemical evolution in the hot prebiotic sea, which gradually cooled and the solubility of the sea decreased. Then D-asparagine incidentally crystallized at first (God might cast a die) followed by crystallization of other D-amino acids on the crystals of D-asparagine, leaving the sea L-rich. From the L-rich sea, the cell developed. This story indicates that the L-rich sea was naturally and incidentally generated.

Recently it was found that meteorites contained L-rich isovaline by 10%. This non-physiological amino acid is supposed to cause the L-amino acid-rich earth. Namely it is speculated that an extra-terrestrial substance generated L-amino acids. This concept resembles the idea that the cell came from the extra-terrestrial space.

In alanine, four different substituents (atom or atomic group: H, NH2, CH3, and CO2H) are attached to the central carbon atom (C) named chiral carbon. Overall structure of alanine is tetrahedral. Then we can figure the structure as in Figure 1, in which a solid wedge represents a bond coming toward us behind the plane of the paper; and a broken wedge, a bond going away from us behind the plane of the paper. All amino acids have a similar structure, in which three groups (H, NH2, and CO2H) are common and methyl group (CH3) is replaced by other substituents.

One Response to L-amino acids, key for the evolution of life came from extraterrestrial space?