Landscapes of jasmonates during flower development and leaf stresses

Hormones are small compounds which regulate many aspects of life, from organ development to environmental adaptations. Jasmonates are plant hormones controlling various biological processes including flower development and defense against insects and fungi. In order to conserve an inducible and efficient defense, but also to promote coordinated flower development processes, the hormone amounts must be temporally and spatially regulated in plants. JA-Ile (jasmonoyl-isoleucine) is an active form of Jasmonates and its abundance is tightly controlled. On the one hand, the biosynthesis of the hormone JA-Ile contributes to its quick accumulation, and on the other hand the JA-Ile quantity is limited through modifications that lead to its inactivation. In the model plant Arabidopsis thaliana, two pathways inactivating JA-Ile have been identified in wounded leaves. One pathway is based on JA-Ile oxidations by cytochromes P450 enzymes from the CYP94 family (CYP94B1, CYP94B3 and CYP94C1), and the other one consists on the JA-Ile cleavage by the amido-hydrolases enzymes IAR3 and ILL6. These two concomitant pathways modify JA-Ile and thus produce JA-Ile derivatives, including the 12OH-JA, 12OH-JA-Ile and 12COOH-JA-Ile (Fig. 1). 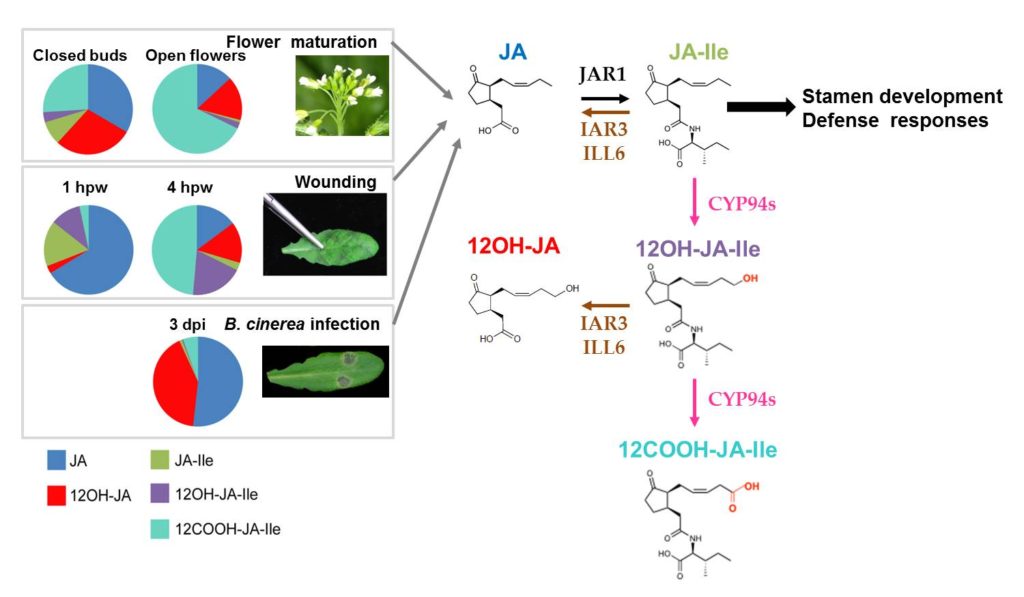 Fig. 1. JA-Ile turnover and profiles of jasmonates in Arabidopsis thaliana. Flower maturation, wounding and Botrytis cinerea fungal infection induce JA production and JA-Ile accumulation through the enzyme JAR1. The jasmonate active hormone promotes stamen development and plant defense responses. The JA-Ile inactivation is realized by cleavage by the amido-hydrolases IAR3 and ILL6, and also by oxidations by the CYP94s. The CYP94B1, CYP94B3 and CYP94C1 oxidations generate the 12OH-JA-Ile and 12COOH-JA-Ile derivatives, CYP94C1 being responsible of most of the 12COOH-JA-Ile production. The 12OH-JA-Ile can be further cleaved by IAR3 and ILL6 to form the 12OH-JA derivative. Pie diagrams show the specific and dynamic proportions of jasmonates according to each biological context. hpw: hour post-wounding; dpi: day post-inoculation.

The inactivation pathway by the CYP94 enzymes has previously been characterized in mechanical wounded leaves (reflecting an insect attack) and in leaves infected by the fungus Botrytis cinerea. This suggests that it could be a general mechanism to inactivate JA-Ile in the context of environmental stress. However, it was unknown if this pathway also occurred when JA-Ile production was induced by the plant itself for developmental purposes. In order to study this question, the role of the CYP94 enzymes on JA-Ile has been investigated during the flower development in this article.

The dosage of jasmonates in close buds and open flowers showed that the abundance of each compound is dynamic during the flower development (Fig. 1). In closed buds, JA-Ile is more accumulated than in open flowers, contrary to the 12COOH-JA-Ile oxidized derivative that is more abundant in open flowers. This indicates that JA-Ile quantity is limited by oxidations during the flower development. In order to know which CYP94 enzymes could be involved in JA-Ile oxidation in flowers, their expression were measured. CYP94B1, CYP94B3 and CYP94C1 are expressed at different levels during the flower development. More specifically, CYP94C1 expression is increased during the flower maturation until full opening and is the most expressed in stamen (where the pollen grains are produced) from open flowers. In order to determine which of the 3 enzymes is/are responsible for JA-Ile oxidation in flower, the jasmonates were analyzed in single, double and triple mutants for CYP94B1, CYP94B3 and CYP94C1. The analysis shows that CYP94C1 is the master enzyme that oxidizes JA-Ile to produce the 12COOH-JA-Ile in flower.

These results were then used to compare the dynamic turnover of JA-Ile and the accumulation of its derivatives between 3 biological conditions: 1) flowers in maturation, 2) mechanical wounded leaves, 3) infected leaves by the fungus Botrytis cinerea. Wounding and infection are external signals inducing JA-Ile biosynthesis, whereas the increase of JA-Ile in flowers is induced by the plant itself. CYP94C1 is the major enzyme controlling JA-Ile oxidation in infected leaves as well as in flowers. However, in wounded leaves, CYP94B3 acts in concert with CYP94C1 for JA-Ile oxidation, CYP94B3 being mostly responsible for 12OH-JA-Ile accumulation. The relative percentages of the measured jasmonates are presented for the 3 systems in the figure 1. Depending on the biological condition, the specific and dynamic expression of each CYP94 and each amido-hydrolase leads to different proportions of JA-Ile derivatives. Like a landscape painter can use the same colors in different proportions to get various outcomes, the plant controls the proportions of each jasmonates to trigger distinct biological effects.