Before we proceed to apply the analogy of Lernaean hydra to compensatory angiogenesis and tumor drug resistance against anti-angiogenic drugs (AADs), let us have a cursory look at the interesting mythology of this hydra. According to Greek and Roman mythology, the ‘Lernaean Hydra’ was a serpentine water monster. Its lair was the lake of Lerna in the Argolid. Hesiod, one of the earliest Greek poets, describes this hydra as an offspring of Typhon and Echidna possessing deadly poisonous breath and blood. The most interesting part is that this hydra possesses many functional heads, and surprisingly for every head chopped off, the hydra would regenerate two heads. If one considers the chopping of head (using drugs) as a target, perhaps it may not be achieved. It seems that nature has assured every creature a promise of survival as a fundamental right and it also prevails in majority of the drug resistance mechanisms. 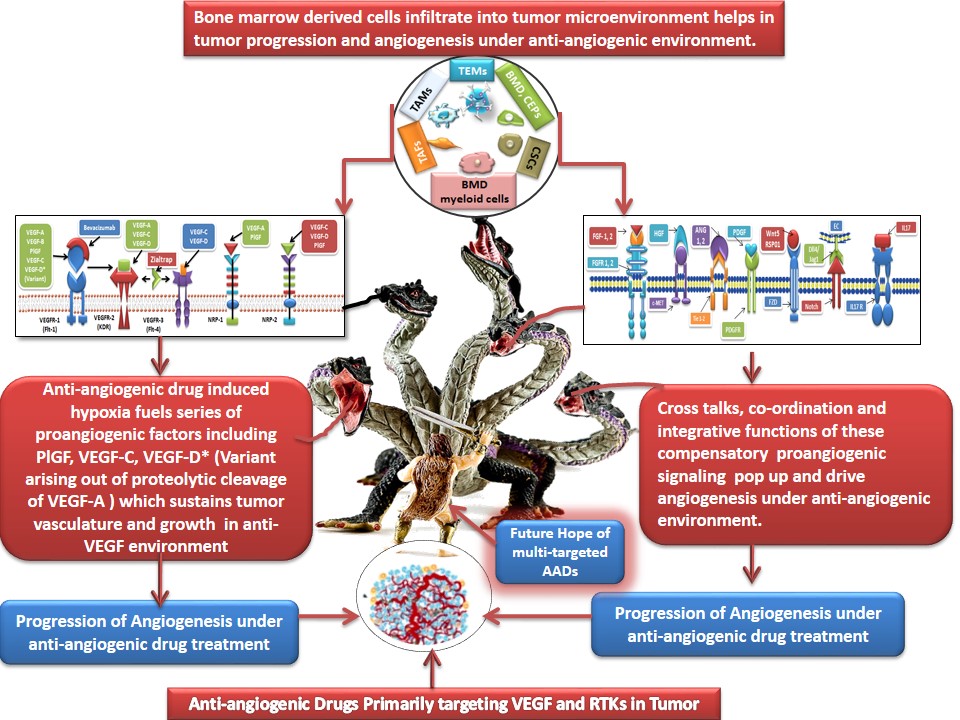 Fig. 1. Diagrammatic representation of how compensatory angiogenic mechanisms are driven by redendent proangiogenic signalling, non-canonical proangiogenic factors and bone marrow derived cells (TAMs, TEMs, TAFs, BMD myeloid cells, CEPs, CSCs etc.). In very inscrutable way these processes sustain the tumor vasculature under anti-angiogenic drug treatment. These multiple heads of Leranean hydra representing multiple redundant angiogenic mechanisms are not targeted by the current anti-angiogenic drugs, as a result the clinical performance of these drugs is being questioned. The future hope is to customize the novel leads against compensatory angiogenic factors and signalling.

The analogy of Lernaean hydra to a greater extent suits with the puzzle of compensatory angiogenesis that triggers after the treatment with anti-angiogenic drugs in majority of the cancerous tumors. Since the establishment of tumor angiogenesis as a drug target, over eleven drugs have been approved by FDA of USA that selectively arrests the process of angiogenesis (formation of new blood vessels). The AADs like Bevacizumab, Aflibercept and Ramucirumab are antibodies that mostly target vascular endothelial growth factor (VEGF), while Sorafenib, Sunitinib, Lenvatinib and many others are small molecule drugs that target receptor tyrosine kinase (RTKs) especially different forms of VEGFRs. Besides the appreciable benefits of AADs to cancer patients, the clinical performance of the AADs is under scientific discourse owing to emerging drug resistance and recurrence of more aggressive forms of tumor after drug holidays. The off target toxicities of AADs are still evolving.

Tumour angiogenesis has been already established as a hallmark of cancer, and hundreds of clinical trials are under progress, testing the efficacy of AADs in series of combinatorial therapeutic approaches for the treatment of variety of cancers. While designing the AADs, majority of the scientist target either VEGF axis or RTKs, mostly variants of VEGFRs. In the recent years series of clinical and preclinical reports have addressed the involvement of VEGF-independent redundant angiogenic mechanisms mostly driven by several compensatory proangiogenic factors and non-canonical angiogenic signalling pathways (Fig. 1). Especially, the implications of fibroblast growth factors (FGFs), Dll4-Notch signalling, HGF/c-Met Pathway, angiopoeitins/Tie axis, PDGF Signalling, few interleukins, Eph/Ephrins, ALK1, Wnt signalling are precisely addressed as bypass angiogenic mechanisms in concert with AAD resistance. These proangiogenic factors and signalling pathways assure the supply of vasculature to growing tumor experiencing the episodes of AADs. Of note, the importance of hypoxia is of immense importance as AADs are known for inducing hypoxia and thereby fuels variety of redundant angiogenic mechanisms.

A decades research excitement and endeavours has unravelled the dynamics of tumor microenvironment, wherein the infiltration of several stromal and bone marrow derived (BMD) cells have been addressed. Another important culprit in AAD resistance is the inscrutable proangiogenic roles played by these stromal cells especially the pericytes and variety of bone marrow derived cells like tumor associate macrophages (TAMs), tie-expressing macrophages (TEMs), tumor associated fibroblasts (TAFs), circulating endothelian cells (CECs), cancer stem cells (CSCs) etc. The dynamics of AAD resistance is also attributed with alternative mechanisms of remodelling angiogenesis which is independent of tumor vasculature. For example the processes like vessel cooption, intussusceptive microvascular growth and vascular mimicry have been cited in series of clinical and preclinical investigations supporting the angiogenesis under AAD stress.

In the midst of these situations, what is needed is the deeper understanding of these redundant angiogenic mechanism so as achieve the druggability against these inscrutable players. Unless we judiciously target these non-canonical pro-angiogenic mechanisms which up regulates during AAD treatment, the Lernaean puzzle and dynamics of compensatory angiogenesis will continue and perhaps it may not be possible to achieve the optimum therapeutic index of AADs.