Lessons learned from the study of non-cancerous meningioma tumors 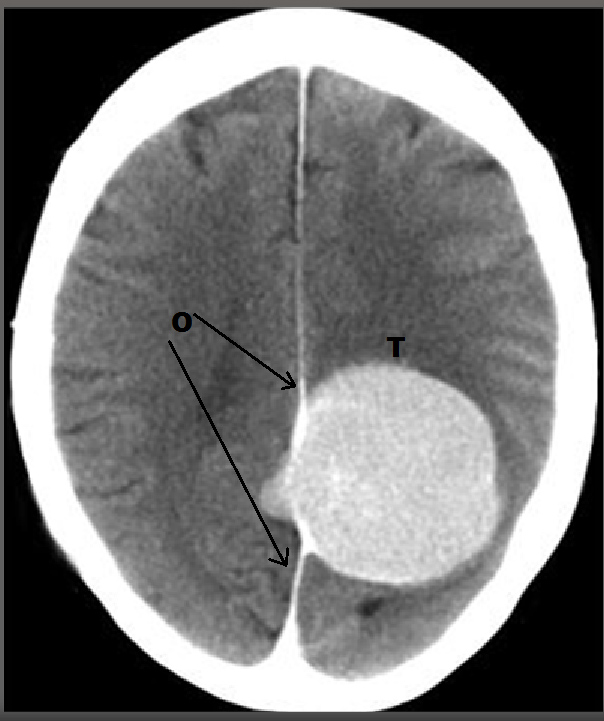 Fig. 1. Example of non-malignant meningioma grade II. This particular tumor (T), is originating from the meninges of the midline structure (falx). The arrows point out to the meninges origin (O) of the tumor.

Many genes function by expressing the corresponding mRNA, which is subsequently translated to a protein that carries out catalytic or structural functions in the cell. However, the successful expression of genes to proteins is under strict control by gene regulatory mechanisms as well as by several other factors that include the environment, the presence of any chemical modifications or the presence of small regulatory RNA (microRNAs; also known as miRNAs) (tiny RNAs of about 22 nucleotides). MicroRNA (miRNA) can target specific mRNA with the assistance of cellular proteins preventing the translation of expressed mRNA target.  According to miRBase version 21 (www.mirbase.org), the human genome encodes 2,552 mature miRNAs.

Meningiomas and dura controls (the outermost layer of the meninges) were sampled during surgery after the project had been approved by the Regional Ethical Committee (REK Nord ref No. 2010 /1619) at the University Hospital of North Norway, Tromsø.

All samples were frozen and kept in liquid nitrogen until RNA isolation. RNA samples were kept at minus 80oC until further use. All expressed miRNAs isolated from grade I & II meningiomas in comparison to normal dura controls were ultra-deep sequenced by the SOLiD platform. After the validation by quantitative Polymerase Chain Reaction (RT-qPCR), clear evidence of differential expressed miRNAs was gained in the non-cancerous tumors compared to the normal dura controls. The tumor suppressor miRNAs, miR-143, 193b and 451 were lower in tumors than the control (Fig. 2). Interestingly, similar lower expression profile of these miRNAs was observed also in cancerous tumors.

Other tumor suppressor miRNAs, such as miR-34a and miR-218 (Fig. 2), were at a much higher level in the tumors than the control tissues. Similarly, the cancer promoting miR-21 RNA was expressed to a much lower level in tumors than normal cells.

Fig. 2. Prognosis summary of non-malignant meningiomas grades I & II in comparison to the normal meninges. The lower level expression of tumor suppressors (TS) coupled with the higher-level expression with oncogene (ONC) and pro-growth (PG) promote the formation and the growth of the tumor. However, the lower expression of oncogene together with the higher level of specific tumor suppressors seems to prevent the malignancy progression of the tumor. 1st denotes first time the biomarker is reported in meningioma.

Evaluating the level of expression of important mRNA targets supported these results. Verification was performed both at the RNA-level (RT-qPCR) and at the protein-level (immunohistochemistry), the latter using antibodies specific for the protein in tissue sections. Over expression of p63 and cyclin D1 were also observed in cancerous tumors, while tumor suppressors PTEN and E-cadherin were at high level (Fig. 2).