Let-7b expression in breast cancer: does have any implications on the DNA repair capacity?

Epigenetics study the changes on gene expression that occur without altering the primary structure of the DNA. Examples of epigenetic mechanisms that can produce such changes include microRNA ( miRNA ) silencing, DNA methylation, histone methylation, among others. MiRNAs are short (17-25) nucleotides responsible of performing post-transcriptional modifications to the DNA.  Through these modifications, miRNAs are able to regulate whether a gene or most often, a group of genes, will be expressed or silenced. Let-7b is among the first identified miRNAs with an important regulatory role. Moreover, let-7b has been inversely associated with several important genes (oncogenes) involved in the progression of cancer such as Myc and p53. These previously reported associations imply that if let-7b is present, the oncogene expression will be reduced or silenced. MiRNAs are involved in multiple and diverse cellular pathways including the regulation of DNA repair. 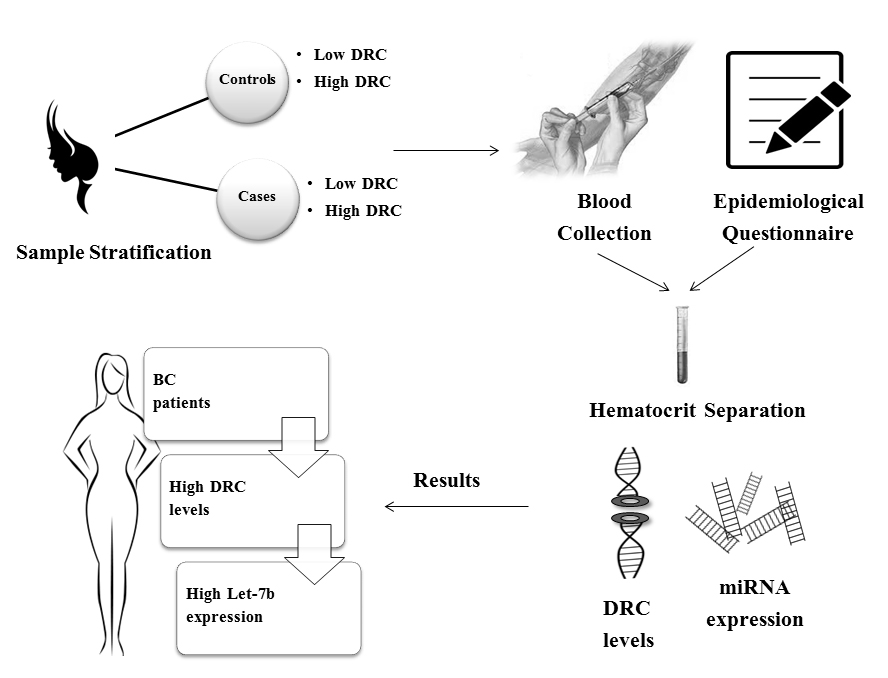 Fig. 1. The experimental design was consisted in the stratification of the 153 women previously diagnose with BC. Before the blood sample was drawn an epidemiologic questioner was fill out by the participant. The pathology reports were also collected. In the laboratory the lymphocytes were used to measure the DRC levels and the plasma was collected to miRNA studies from the resulted hematocrit. Part of the figure was obtained from: http://www.freepik.com

DNA repair capacity (DRC) is a term used to denote the capacity of a cell to recover from DNA damage caused by diverse processes such as cell division and exposure to ultraviolet (UV) light, free radicals or any chemical compounds with a potential to cause DNA breaks. In humans, at least 5 different DNA repair pathways have been identified. The activation of a specific DNA repair pathway will depend on the type or nature of the DNA damage. For example, the nucleotide excision repair (NER) pathway is activated by the damage induced by UV light and certain chemicals. Once this pathway is activated, about 30 enzymes work together to efficiently repair the damage DNA. Rare, genetically inherited defects in DNA repair have been clearly associated with  a wide spectrum of diseases and familial “cancer phenotypes” like Xeroderma Pigmentosum, Cockayne Syndrome and Li-Fraumeni Syndrome, Fanconi Anemia in addition to 8 more hereditary cancer syndromes. As we have previously published, our studies spanning over a decade have clearly shown that women with a low DRC could have an increased risk of developing breast cancer (BC).

In our let-7b study, we used the host cell reactivation assay to measure the DRC levels in the lymphocytes (while blood cells) of 153 Puerto Rican women with and without BC. This assay consists in introducing a circular DNA molecule with a fluorescent marker that emits light when the DNA has been repaired by the cell. Before introducing the DNA into the cell, it is damaged using UV light. The light emitted by the fluorescent marker is a measure of the DRC. Let-7b expression was measured in the plasma of each participant. The women were divided in two groups based on their DRC levels using a previously published cut-off value where low DRC was <3.8% and high DRC was ≥3.8%.  Our results show that high DRC levels are associated with let-7b overexpression in women with BC. Moreover, we found a linear correlation between DRC and let-7b levels in women with BC.

Thus, our data reveal a possible role of let-7b on DRC during BC development. Our study is innovative because it provides the first evidence that let-7b may play role in the regulation of DRC through the NER repair pathway in BC. Our findings also shed some light in understanding the discrepancies reported in the literature regarding the let-7b expression in different studies conducted in other countries.  However more studies are needed to elucidate the exact mechanisms that can more precisely define how let-7b regulates DRC in BC.