Light as a green tool in pharmaceutical approach: myths, reality and possibility

Daylight is an electromagnetic photo-radiation that comprises visible and ultraviolet lights. Since the beginning of creation and light is being used in both simple and complicated biological processes, for example plants use the light energy in the photosynthesis process to make food. Human beings also have utilized light radiation in different activities since the earliest periods of our lives, as such ancient Egyptians exploited sunlight in mummification process. Over the time light energy, especially visible and ultraviolet lights, was promoted in various photo-chemical reactions for constructing biomaterials with variable configurations and structures. Recently, scientific researchers have employed the photo-irradiation as a reaction tool for the construction/amelioration of smart pharmaceutical carriers. Meanwhile, investigators integrate photo-reaction in numerous formulation ideas with the aim of achieving less industrial hazards and optimizing clinical outcome of drugs. Considering that light can provide the sufficient energy for turning the photo-responsive precursors into three dimensional solid/semisolid network structures for application in different pharmaceutical perspectives. 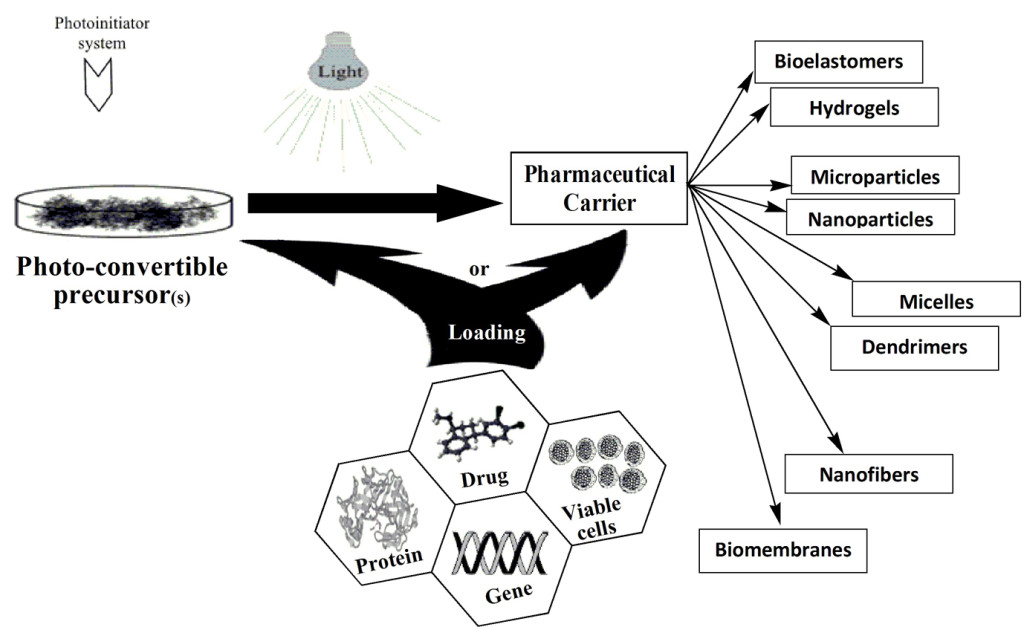 Schematic illustration for the photo-formulation of different pharmaceutical carriers.

These perspectives have been expanded, nowadays, as a well accepted technology to implement material engineering concepts into applied pharmaceutical/biomedical research goals including, but not limited to, the manufacture of tissue regeneration supporting scaffolds and pharmaceutical vehicles for drug delivery. Formulating pharmaceutical vehicles with the light energy stimulates the creativity of researchers to prepare drug delivery systems that are smart enough to fulfill the desired pharmaceutical purpose. These purposes vary from small drug to therapeutic protein delivery and from gene to living cell encapsulation design. A schematic description for the photo-formulation of some pharmaceutical carriers is illustrated in the following figure.

Among the various formulation technologies used in modern pharmaceutical industry, photo-formulation emerged as a promising facile and flexible approach due to the high curing speed, low energy input and low costs. Controlling of photo-curing specifications can easily be manipulated through manipulating the absorption of light stimuli, photo-initiator system and photo-responsive precursor, facilitates the exploration of novel distinctive biomaterials, to be tailored for a specific preparation condition. Therefore, precise control at pharmaceutical manufacture scale can be achieved. Also controlling the wavelength, light intensity, duration of exposure, and beam diameter of incident light afford the spatial and temporal control to the in situ application. At the same time, harmony between the properties of precisely engineered precursors and the formed network structure broadens the investigator’s intellect for both brilliant creations and effective applications.

We emphasize on the different means of optimizing the photo-formulation in designed delivery system including understanding of its mechanism of action, defining its potentials and challenges, and relating all this knowledge to the strategies used in the formulation of different pharmaceutical carriers. Discussion of utilizing different photo-curing procedures in designing/formulation of different pharmaceutical carriers is the main emphasis. In addition, recent applications of these intelligent techniques in targeted, controlled, and sustained drug delivery are illustrated.