Asymmetric cell division is one of the fundamental steps to form the plant body axis. In most flowering plants, the apical-basal axis is established by the asymmetric division of the zygote. In a model plant Arabidopsis thaliana, the egg cell has the nucleus at the apical side. After the fertilization, the zygote rapidly elongates, and the nucleus moves toward the apical side to make apical-basal polarity, leading asymmetric division. The small apical cell generates almost all the plant body, while the large basal cell forms the suspensor, which finally forms a part of root tip. Therefore, the zygote polarization is a crucial step in development, however, the mechanism is almost unknown because it is difficult to observe the living zygote located deep within the flower. That makes it impossible to see what changes in the zygote drive the polarization. 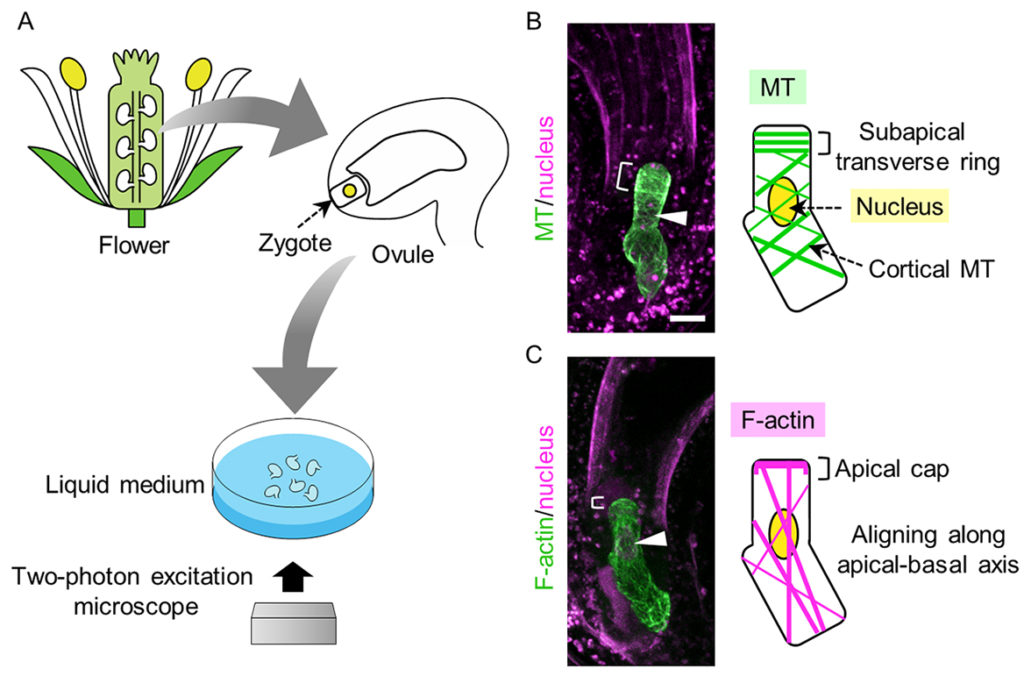 Fig. 1. Live-cell imaging of cytoskeleton. (A) Schematic illustration of how to visualize the intracellular structure of the zygote. (B, C) 2PEM images of elongating zygote expressing MT/nucleus (B) or F-actin/nucleus (C) marker. Right illustrations show the summary of each zygote. Arrowheads show the nucleus, and brackets show the subapical transverse MT ring in (B), or apical F-actin cap in (C). (Scale bar: 10 μm)
This figure is modified from Kimata et al. (2016), Proc Natl Acad Sci U S A 113 (49): 14157–14162.

To understand how the zygote polarizes, we developed live-cell imaging system to visualize the intracellular structures of the zygote (Fig. 1A). We dissected flowers to take out ovules containing young zygotes, and put them into the liquid medium to keep them alive. Fluorescent markers were generated to label the structures in the zygote specifically. In this research, we focused on the cytoskeleton, meaning microtubule (MT) and actin filament (F-actin). We observed the MT and the nucleus of the zygote by using confocal microscope at first, but we could not detect any fiber-like structure of MT. So we adopted two-photon excitation microscope (2PEM) that is suitable for the deep imaging of living cell. After we optimized the imaging condition of 2PEM, we finally got clear image of MT fibers.

Using this system, we traced MT dynamics in the egg cell and the zygote (Fig. 1B). In the egg cell, MTs aligned along the apical-basal axis, but after the fertilization, the MT pattern was disorganized. While the zygote elongates, MTs formed a transverse ring at the subapical region and spiral cortical array at the basal side (Fig. 1B). After the cell elongation completed, the MT ring disappeared, and another ring termed PPB (preprophase band) appeared around the nucleus. Finally during mitosis, MT formed spindle and phragmoplast to divide the zygote.

Next, we performed live imaging of F-actin dynamics (Fig. 1C). In the egg cell, F-actin showed mesh-like structure, and this pattern was also disorganized after the fertilization as similar to MTs. In the elongating zygote, F-actin aligned longitudinally and accumulated at the apical end as the apical cap (Fig. 1C). F-actin was also localized at the phragmoplast during mitosis.

To analyze the role of cytoskeleton in zygote polarization, we observed what happened when each cytoskeleton was disrupted by the specific inhibitors (Fig. 2A). Under the presence of an MT polymerization inhibitor (oryzalin), the zygotes swelled and did not elongate sufficiently compared with the DMSO (control solvent)-treated zygotes. Nevertheless, the nucleus properly moved toward the apical side. In contrast, actin polymerization inhibitor (latrunculin B; LatB) treatment slightly inhibited cell elongation but more severely impaired the nuclear migration. These results suggested that MTs control directional cell elongation and F-actin is essential for nuclear movement to the apical region (Fig. 2B). 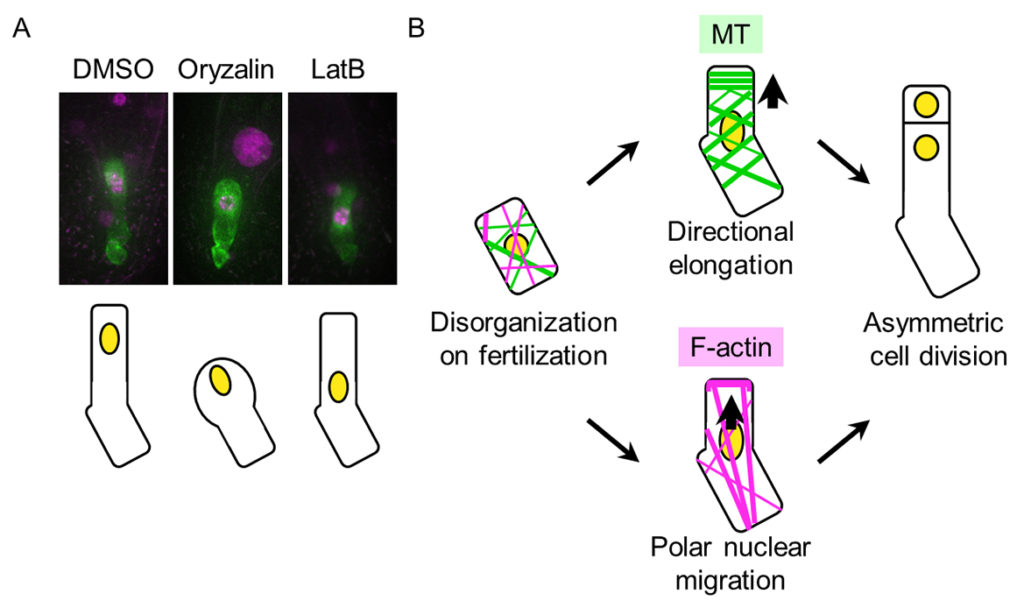 Fig. 2. Roles of cytoskeleton in zygote polarization. (A) Confocal images of zygotes treated by control DMSO, MT polymerization inhibitor (oryzalin), or actin polymerization inhibitor (LatB). The illustrations under the images summarize the cell shape and nuclear position of the respective zygotes. (B) Schematic illustration of the patterns and roles of MTs and F-actin in zygote polarization.
This figure is modified from Kimata et al. (2016), Proc Natl Acad Sci U S A 113 (49): 14157–14162.

Our research showed that MT and F-action are both disorganized on the fertilization, and re-oriented in the particular pattern to play specific roles in the zygote polarization (Fig. 2B). Zygotic asymmetric division is a common feature to establish the apical-basal axis in various plant species including brown algae, moss and land plants. So, we expect that our findings lead to elucidate how plants form their body axis to develop properly.