Liver X receptor beta, the link between thyroid hormone regulation and the browning of white fat

Everyone agrees that when our intake of sugar, fat and protein exceeds the body’s need for nutrition, excess is stored as fat. Fat in the form of white adipocytes is the body’s reserve of energy, which is called upon during periods of starvation. The problem with excessive adipose tissue is that as the adipocytes enlarge they exclude proper blood flow and instead there is a build up of immune cells within the adipocyte cell mass. In this environment where oxygen tension is low macrophages become reactive and begin to secrete cytokines. At this point white adipocytes convert from just a storage area to a toxic dumping ground.

A major challenge in counteracting the present epidemic of obesity is to identify possible ways that either can decrease energy intake or increase energy expenditure. There are two major types of adipocyte in humans: the white adipocytes (WAT) that store the excessive energy in the form of lipid; and the brown adipocytes (BAT) which transform the chemical energy into heat. There is now a great interest in the investigation whether it is possible to increase the amount of brown adipose tissue for the dissipation of excessive energy. 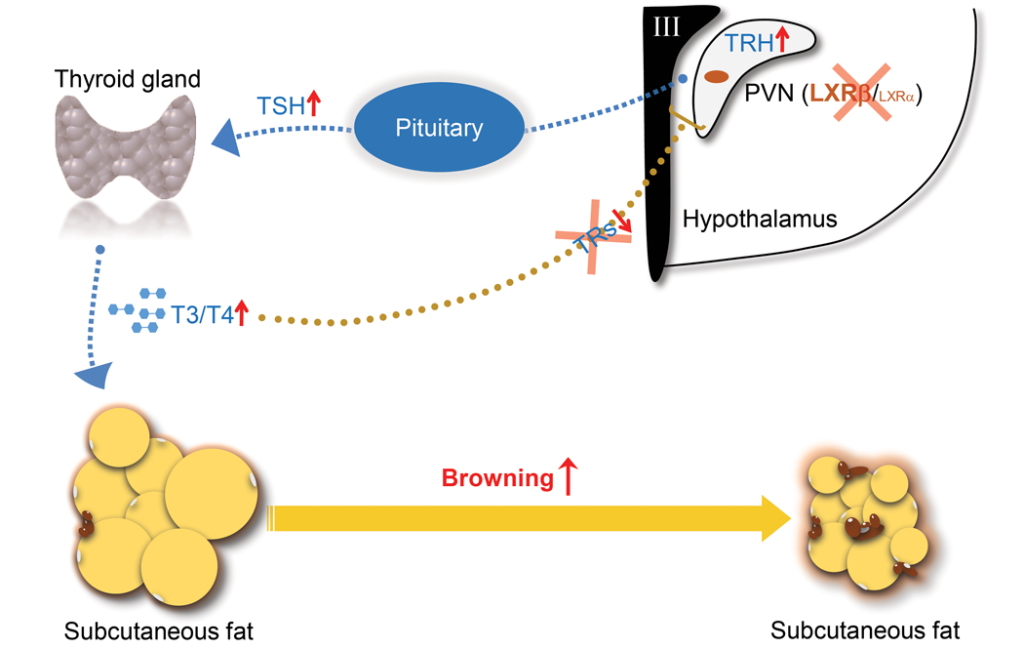 Adult humans harbor a distinct cold-inducible depot of brown adipocytes that are interspersed within WAT depots in the supraclavicular, para-aortic and suprarenal regions. These cells, called beige or brite fat cells because of their beige color, undergo a browning process with cold stimulus or hormone treatments, which have raised a strong clinical interest in targeting beige fat for the treatment of obesity. So could obesity be reversed by cold and hormones?

Liver X receptors (LXRs) a and b are members of the so called the nuclear receptor family. Following binding to specific sites on DNA, they repress or activate expression of certain genes associated with several metabolic activities. Using genetically altered mice lacking either LXRa or LXRb or both of them, we found that depletion of LXRb increased the browning process in WAT in mice and consequently, these genetic knock-out mice burned more energy into heat and showed less adipose tissue content and body weight than normal mice. So could blocking of LXR lead to loss of obesity?

Well here is the problem. Heat production is contributed by either classical BAT or browning of WAT. It is stimulated by the sympathetic nervous system (SNS) whose primary process is to stimulate the body’s fight-or flight response. However, it also has an absolute requirement for the help from a crucial hormone, thyroid hormone (TH), which plays a key role in energy metabolism acting on BAT, WAT and skeletal muscle.

When TH is required, our body sends a message to the brain and some neurons in a certain area of the brain secrete a hormone, which travels to the pituitary and stimulates release of another hormone, thyroid-stimulating hormone (TSH). TSH is the hormone that tells the thyroid to synthesize more TH.

In order to maintain the TH homeostasis, the human body has also developed a system to prevent the over-production of TH, named negative feedback pathway. Through binding to TRs in the brain, TH reduces the secretion of TRH and TSH. But here is the surprising finding: TRs were very markedly reduced in the brain of LXR deleted mice. This means that in the absence of LXR, the brain escapes from the control of negative feedback of TH. Excessive thyroid hormone leads to a special disease caused thyrotoxicosis.

This study began as a fundamental study of the role of LXRb in the browning process of WAT through regulation of HPT axis. The study has provided a new understanding about the neuroendocrine regulation of thyroid hormone. As with all endocrinology, we have to be very careful about how we manipulate any part of a system and should always anticipate and equal and opposite reaction from the body. If we remove LXR we interrupt HPT and influence the negative regulation of TH which will lead to the disease called thyrotoxicosis.