When you ask people with a psychotic disorder, like schizophrenia, what challenges them most in daily life they are likely to say – ‘loneliness’. As nearly everyone can attest, loneliness is painful. It’s the distressing feeling that comes when you don’t feel socially accepted or connected. Loneliness is different therefore from simply being alone, or only having a limited social network – as the saying goes “you can live alone but not feel lonely, or you can be surrounded by friends and still feel disconnected”. 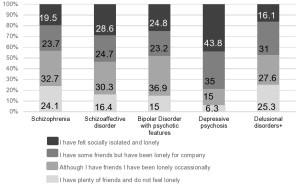 Fig. 1. Distribution of responses (%) to the assessment of loneliness across different psychotic disorders.

Researchers are now looking beyond the link with depression to examine the prevalence of loneliness in other mental disorders. Of particular concern, summary data from the second Australian National Survey of Psychosis showed the extent of loneliness in psychotic illness, with the majority (80.1%) of adults with a diagnosis of psychosis endorsing feeling lonely in the past 12 months and loneliness being ranked as one of the greatest challenges (after financial concerns) to be faced in the year ahead.

In this paper, we examined this issue in much more detail. First, we wanted to know whether loneliness in psychosis was more common than in the general community, and whether it varied across different ‘types’ of psychotic illness. The results showed that the rates of loneliness were high, ranging from 74.7% in people with delusional disorders to 93.8% in those with depressive psychosis (see Fig. 1.) and was significantly higher than the estimated prevalence of loneliness in the general population – which is around 35%.

These findings highlight a need for effective interventions specifically tailored to the needs of people with psychotic illness. Currently, no such evidence-based interventions exist. It’s easy to assume that loneliness can be ‘fixed’ by simply increasing opportunities for social support and participation. However, investment in services grounded in assumptions rather than evidence may be misplaced. For example, data from the Adult Psychiatric Morbidity Survey, 2007, in England suggest that such strategies have minimal positive impact on alleviating loneliness. Developing effective interventions to build resilience and minimize loneliness in people with psychotic disorders will require a  much better understanding of the nature of loneliness and its impact on the emergence of psychotic symptoms informed by rigorous psychological research.