Ureteropelvic junction obstruction occurs in both adults and children when the ureter (the tube that carries urine from the kidney to the bladder) becomes blocked, preventing the flow of urine out of the kidney.  Surgery is often required to correct the obstruction and prevent irreparable damage to kidney function.  This surgery, called a pyeloplasty, involves removing the constricted segment of ureter and reattaching the ureter while reconstructing a wider opening where it meets the kidney to allow the flow of urine.  With the advent of robotic assistance in surgery, it is becoming more common to perform minimally-invasive pyeloplasties in a laparoscopic fashion with robotic-assistance.  This study of robot-assisted laparoscopic pyeloplasties (RALPs) is the first analysis reporting the long-term results of this type of robotic operation. 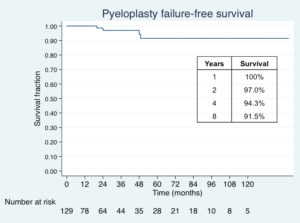 A total of 129 adult and pediatric patients who underwent RALP at our institution were followed up for an average of 33.8 months and a range of 1-147 months.  Of the 129 robotic pyeloplasties performed, 125 resulted in resolution of symptoms, correction of obstruction, and no further requirements for treatment after surgery.  Thus, the success rate was 96.9% with four RALP failures.  All four failures occurred in the first 49 months after surgery, suggesting that clinical follow up is likely appropriate for two to four years postoperatively.  One limitation of this study was that many patients received varying lengths of follow up.  A Kaplan Meier plot, shown in figure 1, was used to adjust for this and calculated the probability of successful pyeloplasty to be 97.0% at two years, 94.3% at four years, and 91.5% at eight years.

This study demonstrates that robot-assisted laparoscopic pyeloplasty is a safe and efficacious method for the correction of ureteropelvic junction obstruction.   However, potential patient-specific risk factors predictive of failure require further future study.  Nevertheless, robot-assisted laparoscopic pyeloplasty did result in long-term improvement in symptoms and resolution of obstruction for most patients for up to twelve years postoperatively.