Look after your compost—it’s more than garden fertiliser

Biologists look upon a pile of compost first of all as an extraordinary habitat of a wide range of different organisms: a microcosm of its own within the garden landscape. Gardeners in Europe are proud of “their” hedgehogs, which use to hibernate in compost piles, or are surprised to find out that a female grass snake has deposited its eggs there. But would you think of your garden compost as a hotspot of previously undetected organisms, those no human being has ever seen before and that have no name yet? 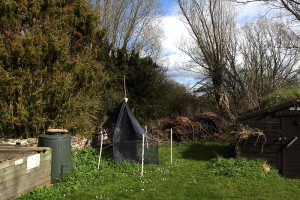 What looks like a boring garden scence is actually the only place on Earth where Linnaeomyia hortensis, a new gall midge recently discovered in the backyard of Station Linné in Öland (Sweden), is known to occur. Note the Malaise trap that captured the midge, presumably from the compost pile behind it. Photo: M. Jaschhof.

Working as taxonomists (biologists whose job consists in collecting, identifying, describing, naming and classifying biological species), we have recently identified a new species of insect from the backyard garden of our laboratory, just a few steps away from our microscopes and computers. This backyard insect, a fly little bigger than a millimetre, was captured by what we call a Malaise trap: an equally ingenious, effective and widely used device to collect specimens of flying or drifting insects. Just a single specimen of the new fly was obtained in six months of continuous trapping, along with thousands and thousands of other insects! Our Malaise trap was mounted next to a large pile of garden compost, a fact making us to assume that the larva of our fly grew up in the decaying plant litter – leaves, twigs, wood chips – deposited there over many years.

Within the zoological classification, where taxonomists categorise everything from the leopard to the house fly, our new species belongs to the family of gall midges. Gall midges are best known for their capacity to induce plants to produce small cavities (often in swellings called galls) as shelters for larval growth. Our gall midge is different: like all its relatives it has larvae feeding on fungi—not on the fruiting body that is commonly known as a mushroom but on the mycelium, a web of delicate threads penetrating the soil beneath our feet as well as the rotting log by the wayside. … And the litter decaying in compost piles, which one should imagine as a Garden of Eden for both these fungi and midges! 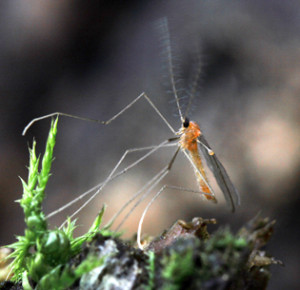 The discovery of the new midge was no fortuitous event. It was carefully planned by us and, in a way, commissioned by the Swedish government. How so? Our discovery is an outcome of the Gall Midge Project (GMP), whose goal is to inventory all the different species of gall midges occurring in Sweden. These we estimate at 1,500 species, of which one half has been documented and the other half awaits to be found. Many of the species we find are not just new records for Sweden but are new to Earth, or better, new to science. Since 2003, our research in Sweden led to the naming of more than 100 species of gall midges that were previously unknown to humankind. Our project is a part of a grand enterprise titled The Swedish Taxonomy Initiative (STI), a unique, state-funded venture to inventory the more than 50,000 species of multicellular organisms occurring in Sweden.

So the expression ‘backyard species’ conveys a clear message: so little humankind knows of the organisms living with us on Earth that new species may be found even in our neighbourhood, not only in the remoteness of tropical rainforests. Still biologists are unable to provide an answer to the big question of ‘How many biological species do live on Earth?’ GMP and STI are contributing to the quest for this answer.

We named our new midge as Linnaeomyia hortensis, or Linné’s garden midge—to honour both Sweden’s greatest-ever taxonomist and Station Linné on the island of Öland, whose backyard provides the only habitat known of this species.