All cells of an organism share the same DNA sequence from the time they are stem cells until they are fully differentiated, differing greatly in relation to the profile of expressed genes.

Changes in gene expression which do not involve changes in DNA sequence of the nucleotides are currently known as epigenetic phenomenon. Epigenetic changes play a fundamental role in the human gene expression and in the mechanism of association between events that occur early in life and alterations in adult life. Thus, in response to an adverse environment in which pregnant women are exposed during the perinatal or neonatal period, epigenetic modifications may lead to alterations in growth and metabolism in later life. Modification of histones (proteins found in eukaryotic cell nuclei) and DNA methylation (a process by which methyl groups are added to DNA) are the major epigenetic mechanisms involved in the regulation of gene expression. 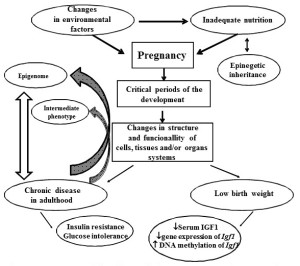 Fig. 1. Schematic representation of the influence of adverse events occurred in utero on the progression of metabolic diseases in offspring.

Maternal insults, mainly inadequate nutrition that may occur during sensitive or critical periods of the fetal development (periods of rapid cell division) can program changes in the structure and functionality of cells, tissues and/or organ systems. These changes may result in premature consequences in the offspring such as low birth weight and/or chronic diseases (hypertension, insulin resistance, obesity, diabetes, etc) in adulthood.

A low-salt diet during pregnancy has been associated with low birth weight and chronic disease in adult offspring, at least in the experimental setting. However, it remains unclear whether this effect is due to salt restriction during early or late pregnancy and which molecular mechanisms are responsible for nutritional programming. To better understand this phenomenon, rats were fed with a low-salt or normal salt diet during whole gestation or a low-salt diet during either the first or second half of gestation.

Our study revealed that the low birth weight observed in response to low salt intake during pregnancy was mainly due to salt restriction during the second half of pregnancy that corresponds to the period of most rapid fetal growth and differentiation of key structures.

Glucose and insulin metabolism in the 12-week-old offspring was influenced only by low salt intake throughout the whole course of pregnancy. The insulin resistance and glucose intolerance observed only in the 20-week-old offspring is an effect of low salt intake during the initial stages of pregnancy corresponding to the embryonic phase of development in the rat and period of organogenesis. These findings are related to the timing of this insult and the age of the offspring.

The expression of genes as insulin-like growth factors is regulated in a tissue specific manner and can be altered by nutritional and endocrine conditions in utero. It is known that the major mediator of fetal growth is insulin-like growth factor type 1(IGF1) and insulin. An interesting and new result observed in our study was that the low birth weight may be due to low serum IGF1 and that IGF1 in newborns is modulated by epigenetic mechanism in response to low salt intake during pregnancy. This observation might underlie the altered offspring phenotypes in this model since growth and insulin sensitivity are modulated by hepatic IGF1. A low birth weight is related to low Igf1 gene expression and high Igf1 DNA methylation levels induced by low salt intake during pregnancy. The variation in the IGF1 serum levels may be due to changes in Igf1 gene promoter methylation. This concept is supported by increased methylation that is often associated with reduced gene expression, as observed in this study.

It was demonstrated that the methylation of genes changed as the offspring aged, indicating that epigenetic changes can occur and can be reversed during postnatal life. Further studies are needed to confirm or not if the observed results are reproducible in human beings in order to recommend low dietary salt consumption during pregnancy.