Lowering the burden of liver disease in the UK: a blueprint for change

People can develop liver disease for a number of reasons but the major causes are excessive alcohol consumption, obesity, and undiagnosed hepatitis infections (Fig. 2).

The Lancet Commission felt that encouraging progress was made across some areas. For instance, the group felt that awareness of liver disease had increased (Recommendation 10), particularly at the government level. Similarly, progress has also been made in terms of treating more people with hepatitis C (Recommendation 8), largely as a result of new drugs becoming available to the NHS. The group also noted that major step forward has been taken on their call for a national review of liver transplant services (Recommendation 4), with a review being initiated in late 2015 to address this issue. 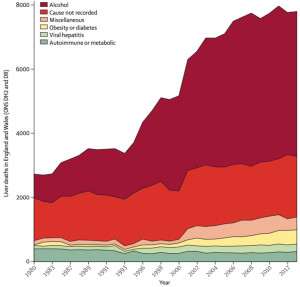 The Lancet Commission also felt that while progress on delivering Recommendations 1 and 2 has been slow, the release of new clinical guidelines on how to treat and manage liver disease in mid-2016 will improve the early detection and treatment of patients with liver disease. It was also observed that progress had been made on implementing Recommendation 5 as evidenced by the creation of a working group tasked with developing clear guidance for managing the care of children with liver disease as they enter adulthood.

On other areas, the Lancet Commission believed only limited improvements had been made. On the provision of medical and nursing training in liver disease (Recommendation 9), the group noted that while there is much appetite for additional training it remains difficult for health professionals to access this training. With respect to the establishment of liver units in district hospitals (Recommendation 3), the Lancet Commission found that efforts to strengthen district-level liver disease services are hampered by a lack of suitably trained liver specialists across the UK.

Despite wide backing from professional experts, public health bodies and national charities the group found that there has been very little progress towards implementing Recommendations 6 and 7, which seek to compel policy action to address the major lifestyle causes of liver disease, namely alcohol and obesity. The Lancet Commission found that a lack of political will to introduce the measures represents a major barrier to adopting the recommendations.