Lung infections and the origins of rheumatoid arthritis

Five percent of individuals worldwide develop an autoimmune disease. The causes of the majority of autoimmune diseases is unknown. But it is recognised that various tissues are damaged by over-activation of our immune system in response to self-components that are altered by an earlier immune reaction, for example an infection. The initial insult is often distant to the site of autoimmunity. In the case of rheumatoid arthritis, evidence suggests that infections of mucosal surfaces such as the mouth, gut and lungs act as early triggers of autoimmunity. 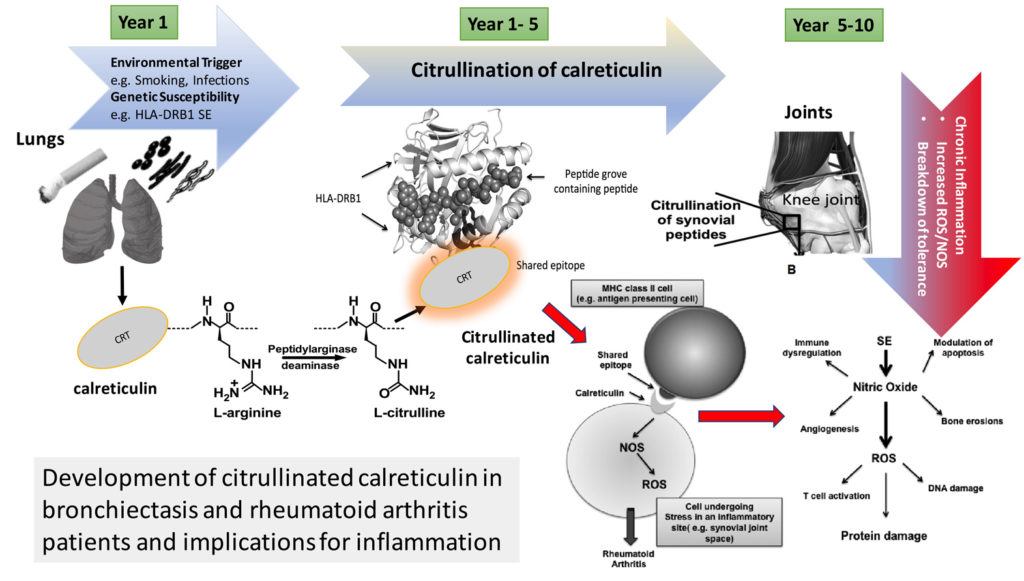 An early diagnostic marker for rheumatoid arthritis, is the chemical modification of amino acids especially arginine to citrulline. This modification initiates the production of anti-citrulline autoantibodies often years before symptoms of disease are detected.

One normally intracellular protein – calreticulin is prone to citrullination in people with both bronchiectasis and/or rheumatoid arthritis. If these people also have a particular genotype termed HLA-DRβ, they acquire a protein on the surface of some of their cells that contains a 5-amino acid conserved peptide call the ‘Shared Epitope’ (SE). It has been shown that calreticulin binds moderately to the SE, but when citrullinated binds with greater intensity. This interaction signals the cell to trigger a number of proinflammatory mechanisms including nitric oxide pro-oxidative signalling pathways. Therefore, excessive generation of citrullinated calreticulin in susceptible individuals might worsen their disease.

Previously we detected extracellular calreticulin in the joint synovial fluid and serum of rheumatoid arthritis patients.  In our recent study, we detected the presence of citrullinated calreticuln in patients with bronchiectasis prior to them developing rheumatoid arthritis. Given the pro-inflammatory characteristics of citrullinated calreticulin this might be important in the breakdown of immune tolerance.