Marine mammals live a life of dual constraints. These air breathing animals need to spend time at the surface to replenish O2 used and remove CO2 produced by metabolism. However, food is underwater and the longer they are able to hold their breath the more food they can obtain per dive. Consequently, foraging success depends on time underwater. Most of these animals dive to at least 30 m but some as deep as 3,000 m. At these depths the extreme pressure compresses the gas volume of the respiratory system. 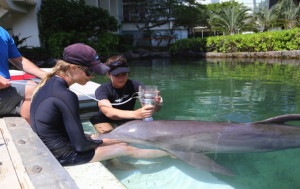 It has long been thought that the specialized anatomy of marine mammal lungs, with a flexible chest and lung and rigid conducting airways, reduce the chances of barotrauma and decompression sickness. However, until recently few studies have investigated the mechanical properties of the respiratory system in these elusive animals that may be important to reduce problems during exposure to pressure while breath-hold diving. In dolphins and whales this has been particularly difficult as they exhale so forcefully that it has been difficult until recently to measure the flow-rates during exhalation.

“The sympathetic, trusting relationship between the dolphins and their trainers was essential for our success. Even though the dolphins were trained to respond to their trainers’ directions, they only participated voluntarily, which allowed us to test important physiological variables with no stress to the animals,” says Fahlman. Such studies on physiological function would be extremely difficult to perform on wild animals and would take several years.

On July 8, 2015 Fahlman and colleagues published the first paper from these experiments in the Journal of Experimental Biology. The results included baseline data on respiratory flow-rates, tidal volume, and end-expiratory O2 and CO2 concentrations. The study’s findings identified that the dolphins’ unusual lung anatomy allows them to exhale up to ten times faster than humans, and likely helping them avoid decompression sickness.

The study resulted in valuable baseline data on lung function from healthy dolphins providing veterinarians and scientists better tools for diagnosing and treating dolphins in a variety of situations such as during mass stranding events. For example, the respiratory system of dolphins is adapted for life in water. When these animals become stranded on a beach, the weight of their body limits the ability to breathe and to exchange O2 and CO2. The inability to exchange gases eventually cause severe health problems. The system developed by Brodsky and Fahlman allows assessment of stranded animals on the beach to provide the stranding team continuous updates.