Lung ultrasound. A field for misconceptions… and friendships

Born from the wreckage of the Titanic, used in the marine then industry, ultrasound impacted medicine in the 50s. However, the lung has always been considered as not accessible to this simple, noninvasive, cost-cutting discipline. This assumption was wrong, as proven by a 3-decade research which demonstrated, brick by brick, the scientific basis of lung ultrasound. Pandemic helping, the lung, the most vital organ, gets suddenly accessible to the physicians. This is not really “ultrasound”: the inclusion of lung ultrasound in acute medicine has changed its practice. 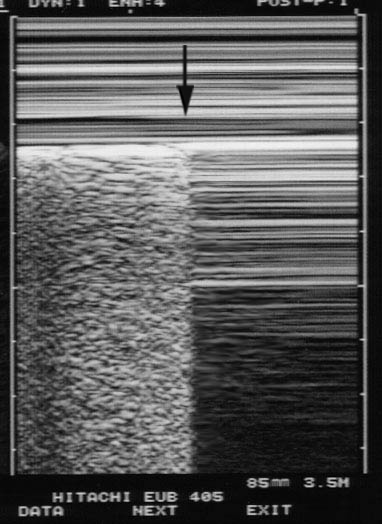 Fig. 1. A lung point. Non experts will maybe not understand this pattern, but can see the arrow separating two fully different patterns left and right. This is a typical lung point. Such a pattern (especially on real-time) cannot be mimicked when the sequence of the BLUE-protocol is used (a profile called A-prime-profile must first be detected). Microconvex probe, technology from 1992.

We spent a life (officially, since July 1st, 1991) for sharing the potentials of critical (not only lung) ultrasound, a different discipline: first, the user is no longer the radiologist. Second, the patient is no longer the ambulatory patient (who can be sent to the radiology department). Third, the field is no longer the study of the gallbladder etc, but all those applications, never really standardized before, found in critical medicine. We called it “critical ultrasound”, a domain which has today many other names (POCUS e.g). The venous line insertion for instance, was described in our native article. Yet doctors did not immediately realize the power of this visual medicine. In addition, as we advocated that the lung (supposed impossible) was the main piece of this new tool, this did not really help, as anyone can imagine. Little by little, knowing or not our native article, teams developed emergency ultrasound, but doing this without including the main vital organ was making only half the work. Precisely, if physicians begin with the lung, sophisticated fields of medicine can be simplified. This is why (among others) we advocate critical ultrasound as a holistic discipline. In acute respiratory failure especially, traditional tools such as radiographs, blood analyses, computerized tomography (CT) and others (complex echocardiography first) can be challenged by the BLUE-protocol. This approach provides a diagnosis of pneumothorax of course, but also pulmonary edema, pneumonia (Covid included), pulmonary embolism, asthma ..

When a field has been created from zero (here below zero), it is unavoidable to see it widespread by teams which have more or less understood the native concepts, for the best, or… not. This can result in a situation where, in practice, it does not work so well. Pneumothorax, a life-threatening emergency, is often misunderstood. Among forty main misconceptions in the field, recently published, we explained how to optimize its diagnosis. It can be so fast that this is the first of five steps used during a cardiac arrest (SESAME-protocol, where the heart comes in position #5). One sign (when present) indicates pneumothorax with a complete confidence (Fig. 1). As foreseen, several publications showed cases where it “did not work”. Time permitting, we answered to some of them, with the opportunity to specify our methodology with more details (word count is the challenge of any researcher). We know and understand how important it is for a team to publish (publish or perish is an obsession of all doctors aiming at academic carriers). We just explain what is right, what is wrong, time permitting for writing to the Editor. The article labelled “The lung point, still a specific sign to pneumothorax” answered to an article which debated our native article. We even proposed to their authors to join us, in order to combine science and friendship.

Developing lung ultrasound, advocating simple equipments (available since the year 1982), the use of one universal probe e.g, we await many articles demonstrating the opposed… but we are ready to answer… time and word count permitting.