Hydrogels as three-dimensional polymeric networks have been of longstanding interest due to their biocompatibility, hydrophilic nature, desired functionality, high elasticity, and superb capacities for retaining large amount of water and other biological fluids. According to the unprecedented level of recent progress in biomedical science, these multipurposed materials based on natural and synthetic polymers can act as tissue-like structures. On the other side, the inflammatory reactions of surrounding cells and living tissues can be reduced by their soft and rubbery nature. In this regard, chitosan-based hydrogels have been highlighted as one of the most highly promising bio-inspired candidates, as their valuable features such as biocompatibility, antimicrobial activity, nontoxicity, hydrophilic nature, and biodegradability have provided all substantial necessities for using in biomedicine strategies. 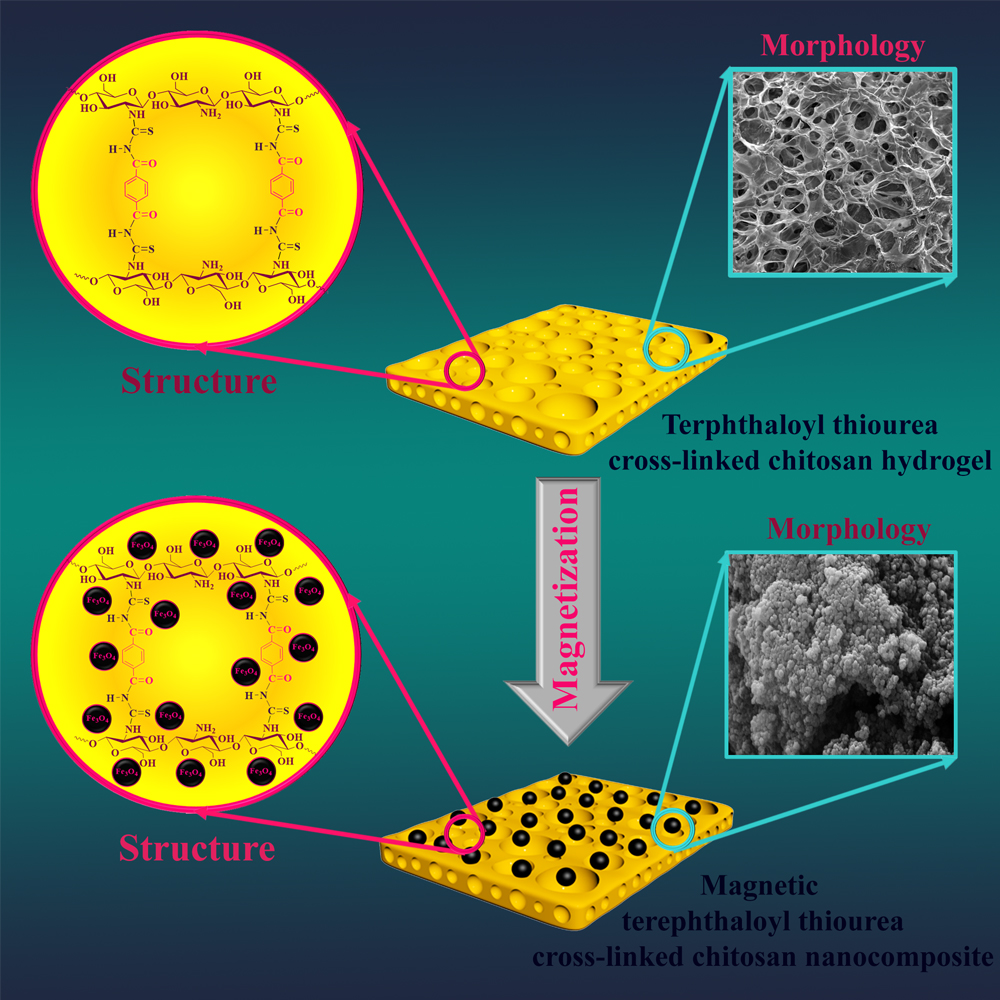 Considering the functional groups of chitosan (amine and hydroxyl groups), the formation of chitosan-based hydrogel can be conducted by cross-linking with its own polymeric chains or various cross-linker agents. In addition to these descriptions, it has been indicated that the combination of chitosan hydrogel lattices with a wide range of organic and inorganic nanomaterials can create a new generation of nanocomposites with enhanced therapeutic effect, unique, and unlimited features. Magnetic nanoparticles have been converted to the highly potent and ideal nanoplatform materials due to their super-paramagnetic behavior, size-dependent tunable magnetic feature, large surface area, and other distinctive physiochemical properties. In recent years, alongside of surgery, radiotherapy, chemotherapy, and immunotherapy, therapeutic magnetic fluid hyperthermia method as an effective and complementary treatment method have been applied to treat recurrent and advanced cancers. In this therapeutic heating method, the magnetic nanoparticles are activated by using an alternating magnetic field. Their magnetic moment oscillates and the generated magnetic energy converts to heating energy. This heating energy can destroy the cancer cells; because they are vulnerable to the high temperature. Following that, two important factors including the velocity and time of injection must be considered in this therapeutic strategy, as the injection time is dependent on the velocity of injection. During the injection, the prepared sample solutions should have a constant homogeneous phase and the magnetic nanoparticles must not be agglomerated and precipitated. We believed that the hydrophilic nature of synthesized terephthaloyl cross-linked hydrogel and the presence of its abundant hydrophilic functional groups (hydroxyl, thioamide) can resolve two main problems, the injection time and homogeneity. In this research study, the combination of biopolymeric chain of chitosan and synthesized terephthaloyl diisothiocyanate cross-linker was generated the three-dimensional terephthaloyl-thiourea cross-linked chitosan hydrogel. This synthesized cross-linked chitosan hydrogel as a new substrate was applied for the in-situ preparation of magnetic Fe3O4 nanoparticles and formation of magnetic terephthaloyl thiourea cross-linked chitosan nanocomposite (Fig. 1). The homogenous distribution of synthesized magnetic Fe3O4 nanoparticles with an average size (30–40 nm) was well characterized on the structure of synthesized hydrogel substrate. Apart from high saturation magnetization value of synthesized magnetic nanocomposite (66.92 emu/g), its performance in different concentrations was evaluated by using an alternating magnetic field. The obtained results indicated that 1mg/mL of magnetic nanocomposite sample was sufficient to generate maximum specific absorption rate (78.43 w/g). In addition to this, it was determined that the highest thermal energy can be observed by 5mg/mL of nanocomposite sample. Therefore, in this research, we understood that the sample concentration as an important factor could influence more on the heating capacities than the frequencies of alternating magnetic field.