Arsenic is a ubiquitous element in the environment originated from natural sources as well as human activities. This element has been identified as a public health problem because it has serious toxic effects even at low exposure levels. However, the toxicity of arsenic depends very much on its chemical forms. Several investigations showed that inorganic arsenic species are in general 100 times more toxic than the organic ones, and inorganic trivalent forms are around 60 times more toxic than the pentavalent ones. In environmental waters, arsenic exists predominantly in two chemical forms: As(III) and As(V).

In view of these facts, fast, sensitive, accurate and simple analytical methods for the speciation of in-organic arsenic in environmental waters are required. In this study, an on-line preconcentration system using two magnet knotted reactors (MKR) containing (Fe3O4) magnetic nanoparticles functionalized with [1,5-bis (2-pyridyl) 3-sulfophenylmethylene] thiocarbonohydrazide (PSTH-MNPs) was proposed for the speciation of inorganic arsenic in natural waters (sea-water, lake and well-water). In fig. 1, the MKRs containing the resin coupled to the injection flow (FI) system are shown. On-line magnetic solid phase extraction (MSPE) using MNPs as the sorbent is one of the latest developments. These automatic preconcentration techniques offer several important advantages over the off-line ones as simplicity of operation, higher sample throughput, improved analytical characteristics and reduced sample and reagent consumption.

On-line MSPE was combined with a gas-liquid separator (MSPE-GLS) in order to differentiate As(III) and total inorganic As. As(III) and total inorganic As were sequentially eluted (Fig. 2) in different reduction conditions, using borohydride (BH) 0.1% for As(III) and 0.5% for total As. In BH 0.1% conditions, only As(III) was reduced to AsH3 (gaseous substance) and measured, while BH 0.5% also reduces As(V) to As(III). In these conditions, all the arsenic as As(III) merged to produce AsH3 and be determinated. The concentration of As(V) was obtained by subtracting As(III) from total As. Moreover, three response surfaces designs were performed for optimization of relevant parameters related to (a) elution of arsenic species in the manifold and reaction conditions for hydride generation (reagent concentrations) and (b) FI parameters. 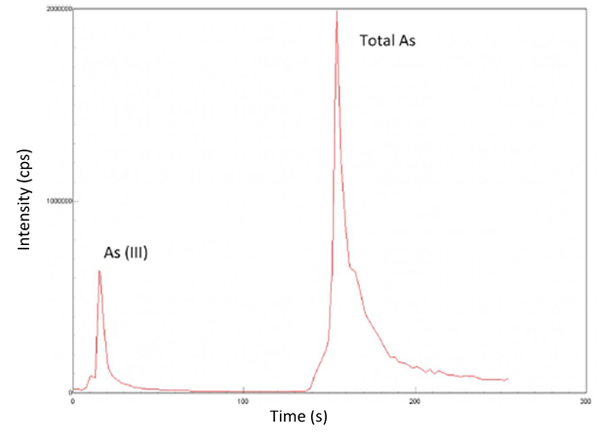 Inductively coupled plasma mass spectrometry (ICP-MS) was used as detector. It is known, that the direct measurement of As by this highly sensitive technique, is affected by interference from polyatomic isobaric ions. One of the best-known interferences by cluster ions is the 40Ar35Cl+ that prevents the determination of mono-isotopic 75As. The method was validated successfully by analysing natural waters certified reference materials (CRMs): SLEW-3, estuarine water; CASS-5, sea water; TMDA-54.4, lake water; and SP-SW2, surface water; and applied to real samples: well water and sea water.  The accurate determination of arsenic species in samples with high content of Cl– was possible with a quadrupole ICP-MS instrument without the use of collision or reaction cell, so it can be said that this interference was avoided.   The proposed method proved to have a wide linear range and to be precise, sensitive and fast. The detection limits found were 2.7 and 3.2 ng/L for As(III) and total As, respectively; with relative standard deviations (RSDs) of 2.5% and 2.7% and a sample throughput of 14.4 h−1.