It was in 1985 when the soccer ball appeared in chemistry. Spherical carbon cages were discovered, now known as the fullerenes and consisting of 60 carbon atoms in the shape of a soccer ball. Their discoverers have been rewarded with the Nobel Prize in Chemistry in 1996. Not long after the first synthesis of the 60-atom fullerenes, it was realized that similar species exist, being also hollow carbon cages, but smaller or larger than the C60 molecule. While there is no strict upper size limit of these hollow spheres, they cannot be smaller than C20 without disintegrating into chains or graphene-like flakes. The 20-atom cluster is particularly interesting because it has the shape of a dodecahedron, the platonic solid with 12 pentagonal faces and 20 vertices. While techniques to produce C60 in larger quantities were consequently developed, the small fullerenes such as C20 or C32 remained elusive. Traces of them were occasionally detected in mass spectra, but it remained unclear how they can be fabricated. Their physical and chemical properties could just be calculated but not measured. 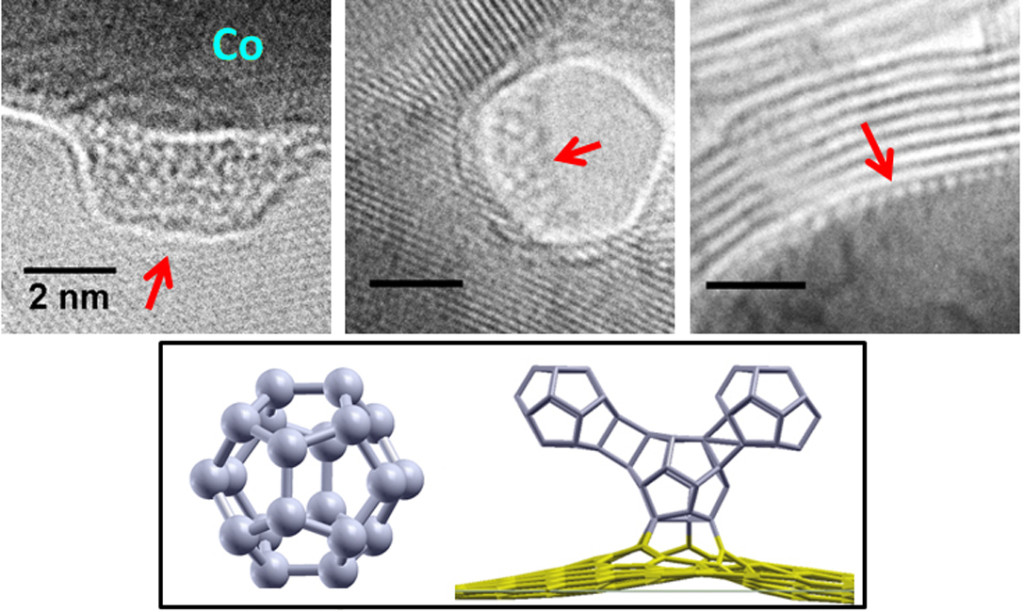 Now, experiments at the University of Strasbourg (France), in collaboration with project partners at the Institut Néel in Grenoble and the ONERA in Paris, shed light onto such mini-fullerenes. In the specimen chamber of an electron microscope, carbon material was brought into contact with a catalytically active metal such as cobalt or iron and heated to temperatures of 750°C. This is a well-known starting point of procedures to grow carbon materials such as graphene or nanotubes. However, this time another carbon nanomaterial was seen to grow. Upon repeated heating and cooling, carbon atoms dissolved in the metal and successively segregated on the metal surface. The high resolving power of the electron microscope allowed seeing the growth of small carbon clusters. These appear as small dark circles in the micrographs (see top row in Figure 1), just like C60 cages, but with clearly smaller diameters down to 0.4 nanometers. This is what is expected for a C20 molecule (a C60 has a diameter of 0.7 nm). Furthermore, the balls never appear alone; instead they agglomerate and even form regular arrangements like a molecular crystal.

To find out more about the nature of these unexpected aggregates of tiny fullerenes, they were studied experimentally by electron energy-loss spectroscopy and theoretically by atomistic computer simulations. A comparison with the electron microscopy observations showed that the cages are in a polymerized state (see the model bottom right in Figure 1). Strong chemical bonds form between the cages and hold them together in aggregates. This is due to the high chemical reactivity of the cages that have the highest possible curvature of all species related to graphenic carbon. The “standard” fullerenes C60 are much less reactive and not self-polymerizing without pressure or irradiation; they are held together by weaker and longer van der Waals bonds.

The procedure can, in principle, be upscaled to synthesize larger quantities of polymerized mini-fullerenes. However, a technique to separate them from other carbon residues has still to be found. Polymerized C60 molecules under high pressure are known to be an extremely hard but nevertheless unstable material; we can therefore assume that polymerized C20 that exists at low pressure could be a more stable alternative.