Citicoline is marketed as a nutritional supplement in the United States and has been shown to influence cellular metabolism in the brain and to contribute to the synthesis of essential neurotransmitters including acetylcholine and dopamine. Citicoline is found in small amounts in a variety of foods, primarily the brain and liver, and has been shown to produce limited side effects as a nutritional supplement. Interestingly, research has found that individuals who take citicoline show increased cognitive performance on tasks involving attention, visual acuity, and impulsivity. 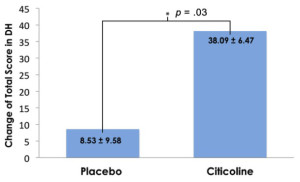 At the end of the 28 days of supplementation, individuals in the citicoline group showed increased motor speed on Finger Tap Dominant Hand as well as increased attention and motor speed on Ruff 2&7 Speed (see Figures 1 & 2). Because male adolescents in the study presented with a wide range of heights and weights, analyses for dose-related effects of citicoline also were completed. Dosage (mg) of citicoline was divided by the weight of participants (kg) to enable analyses based on weight-adjusted dose (mg/kg). Weight-adjusted dose of citicoline was significantly related to improved attention (Ruff 2&7 Accuracy and Computerized Performance Test-II Detectability and Commission Errors) with higher doses related to improved attention. After 28 days of taking placebo or citicoline, the two groups did not differ on their side effect profile. 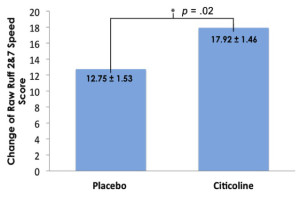 Fig. 2. Improved performance on the Ruff 2&7 Speed task after supplementation.

Overall, the current study showed that healthy adolescent males who took citicoline for 28 days showed increased performance on motor speed and attention tasks compared to those who took the placebo. Previous research has focused on improvement of deficits, whereas the current study focused on enhancement of abilities that were already in the average to above average range. Given the results of this study, further research should be done not only to examine cognitive enhancement in healthy populations but also in populations with other cognitive deficits such as individuals with psychiatric disorders. Citicoline may be particularly helpful for populations with decreased dopamine such as Attention Deficit Hyperactivity Disorder, as citicoline aids in the synthesis of essential neurotransmitters including acetylcholine and dopamine.