Many factors determine prognosis in resected lung cancer. Is visceral pleural involvement one of them? 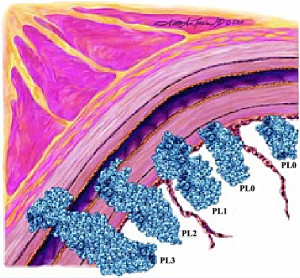 Our attention is focused on VPI because it determines if a tumor will move from T1 to T2ab and be upgraded in stage IB or IIA.

The main topic is if the influence of VPI on prognosis is significant also in < 3 cm tumors. In fact, conversely to the official TNM system, some Authors have suggested that VPI does not influence survival. They think that > 3 cm tumors have a worse prognosis because of the size itself, independent of VPI. Therefore, they do not support the upstage to T2ab and related adjuvant chemotherapy in cases of VPI in < 3 cm tumors.

To reach a definitive recommendation, Huang and Co-workers published an interesting meta-analysis investigating the role of VPI as a prognostic factor in resected stage I NSCLC. Their results showed that VPI was associated with a poorer overall survival and with a higher risk of recurrence in stage I patients. Moreover, they found that VPI was independent from tumor size and histology type in affecting overall survival (OS) and recurrence-free survival (RFS). Therefore, they support T2 upstaging in cases of VPI independent of tumor size and suggest the use of adjuvant treatment (such as for stage II patients) independent of histology.

Our main concern is their method for including patients in their study. The authors declared that confounding factors such as the type of operation were adjusted, but they did not report any data about margins and nodal dissection. However, it is common opinion, that the kind of resection, the extent of the margins and the hilar nodal dissection are significant factors in determining OS and RFS. Furthermore, these data are essential when comparing < 3 cm tumors since nowadays many different surgical approaches are adopted for their management (open vs VATS, anatomical vs non-anatomical resection, lobar vs sublobar resection).

Our second concern is the heterogeneity of VPI diagnostic methods adopted by pathologists in the studies included in this meta-analysis. The results from Huang and Co-Workers are interesting but the biases make their conclusions too weak to provide a definitive statement about the prognostic impact of VPI in small tumors. However, their conclusions are consistent with the TNM system data and the most important medical association consider VPI a high-risk feature deserving of adjuvant chemotherapy. Therefore, we think that more data are needed before removing T upstage for < 3 cm tumor presenting VPI.