Dementia is not a specific disease but rather an umbrella term for a collection of syndromes that affect thinking and behaviour. This is similar to cancer being the umbrella term for different cancer types, such as melanoma, breast cancer or brain cancer.

Many different forms of dementia exist, with multiple different causes. The two most common forms of dementia affecting young people (before the age of 65 years) are Alzheimer’s disease (AD) and frontotemporal dementia (FTD). In AD and FTD, the symptoms are caused by a progressive loss of brain connections and neurons, the building blocks of a healthy brain. This process is known as neurodegeneration. The resulting loss of brain tissue is called atrophy.

Symptoms of dementia vary depending on the areas of the brain affected. People with AD typically show atrophy in the hippocampus and closely related structures of the temporal lobes. Clinically, AD patients experience memory loss and changes in language, orientation and behaviour with disease progression. FTD is a heterogeneous group of diseases characterized by progressive damage to the frontal and/or the temporal lobes of the brain. When the frontal lobes are affected first, the main changes are in personality and behaviour, and this is called the behavioural-variant of FTD (bvFTD).

Despite good understanding of the patterns of brain atrophy at presentation in AD and bvFTD, little is known about how this changes over time. In order to better understand these syndromes, it is therefore critical to examine the progression of brain atrophy over time.

Brain imaging techniques provide high resolution 3D images of the brain that allow doctors and researchers to detect brain changes during life without invasive neurosurgery. Recent advances in these neuroimaging techniques allow the measurement of structural changes in the brain surface (i.e. the cortex) and also in deep-brain subcortical regions. 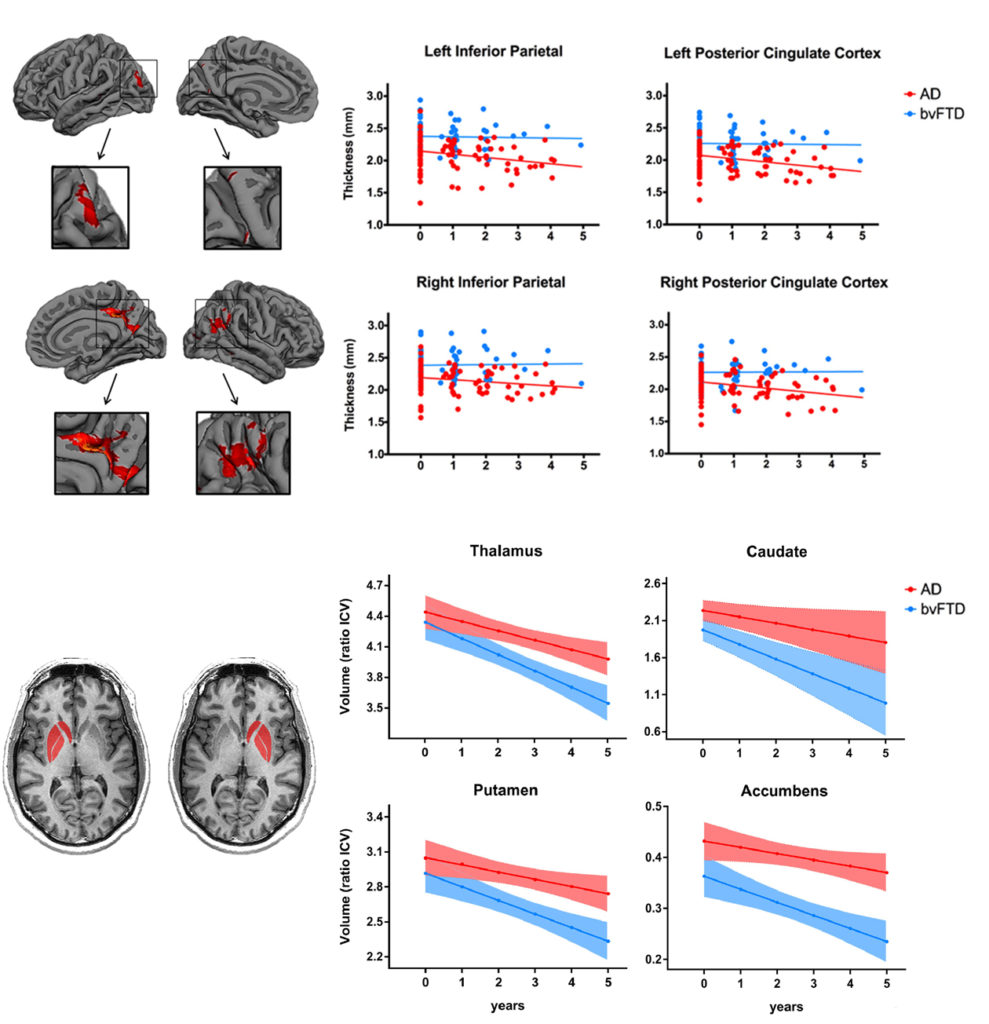 In this study, we applied these techniques to examine progressive changes in brain atrophy in 41 AD and 37 bvFTD patients across a time span of 5 years. First, we examine the progression of brain atrophy within AD and bvFTD. Then we identified the different trajectories of atrophy between each of these syndromes.

Our results revealed that patients with AD showed early atrophy in posterior temporal and parietal regions whereas patients with bvFTD showed atrophy in the frontal cortex (Fig. 1, left panel). Over time, in AD the atrophy extended anteriorly to temporal and frontal regions (Fig. 1, middle panel). In contrast, in bvFTD the atrophy extended posteriorly to the anterior temporal lobes (Fig. 1, right panel).

To sum up, using state of the art imaging techniques we have uncovered different maps of brain shrinkage in AD and bvFTD with disease progression. In patients with AD, changes are occurring faster in posterior regions of the brain surface, while patients with bvFTD show greater deep brain progressive change.

These results have important implications for our understanding of these disorders. First, reliable information about the location and severity of brain atrophy and its evolution over time is likely to help with the diagnosis of these dementia syndromes. In particular, changes in the posterior cingulate and in the thalamus and striatum may be biological indicators for the progression of AD and bvFTD. Ultimately, these brain regions can be used as therapeutic targets in future drug trials aimed at slowing the progression of atrophy in these syndromes.