Human brain is an enormous and complex network. Central to current scenario on brain networks is the concept of the connectome, which likely describes patterns at multiple levels of scale, for instance, by encompassing connections between the brain regions at macroscale and pathways in more simple mesoscale functional units such as minicolumns and their patterns of interconnectivity. 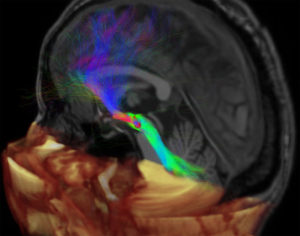 Since the earliest time, anatomists and neuroscientists lacked reliable tools for mapping brain connections in humans.

Recent advances in Magnetic Resonance Imaging (MRI) have enabled the study of the anatomical whole brain connections in vivo and non-invasively in humans using diffusion MRI (dMRI) and tractography, thus filling important gaps in our knowledge of human brain anatomy. dMRI allows to analyze anisotropic water diffusion inside the brain tissue and to  provide information  on several features of white matter anatomy; tractography, instead, is a dMRI-based technique able to detect and reconstruct white matter fiber bundles (called “streamlines”), in a way analogous to virtual dissection. However, diffusion tensor-based tractography methods are able to detect only one main principal direction within a single voxel, and therefore have limited capability to reveal complex anatomical white matter circuits. In the last years, more sophisticated approaches have been developed to overcome this limitation, thus allowing to distinguish and reconstruct fiber tracts with complex geometries.

In our work, we used an advanced diffusion modeling technique, namely Constrained Spherical Deconvolution (CSD), to reconstruct, in humans in vivo, the structural connectivity of the Red Nucleus (RN), a key center of motor integration placed in the brainstem.

According to animal studies, RN is divided into a magnicellular and a parvicellular part.

The magnicellular part receives important inputs from motor and premotor areas of the cerebral cortex and from cerebellar nuclei. Its output is instead transmitted by efferent fibers to the spinal cord regions, which innervates the upper limb muscles, thus allowing a fine regulation both in posture and in grasping and reaching actions.

The parvicellular region connects cerebellar cortex and cerebellar-dentate nucleus to the thalamus via the so-called “dento-rubro-thalamic tract” and sends also efferent fibers to the olivary nucleus that in turn is connected to cerebellar cortex, finally constituting a closed loop, which plays a major role in motor memory and in motor-action preparation.

Based on our MRI data resolution, we could not distinguish between the magnicellular and the parvicellular parts of the RN. However, we were able to reconstruct dense cortical and subcortical connections of the RN. In particular, we found strong connectivity between RN and several structures, such as cerebellar cortex, thalamus, paracentral lobule, postcentral gyrus, precentral gyrus, superior frontal gyrus and dentate nucleus. We also found sparse connections between RN and caudal middle frontal gyrus, inferior and superior parietal lobules and middle temporal gyrus. Although some studies have shown a possible connectivity between RN and globus pallidus, the existence of this pattern of connectivity in humans remains still elusive and highly controversial. 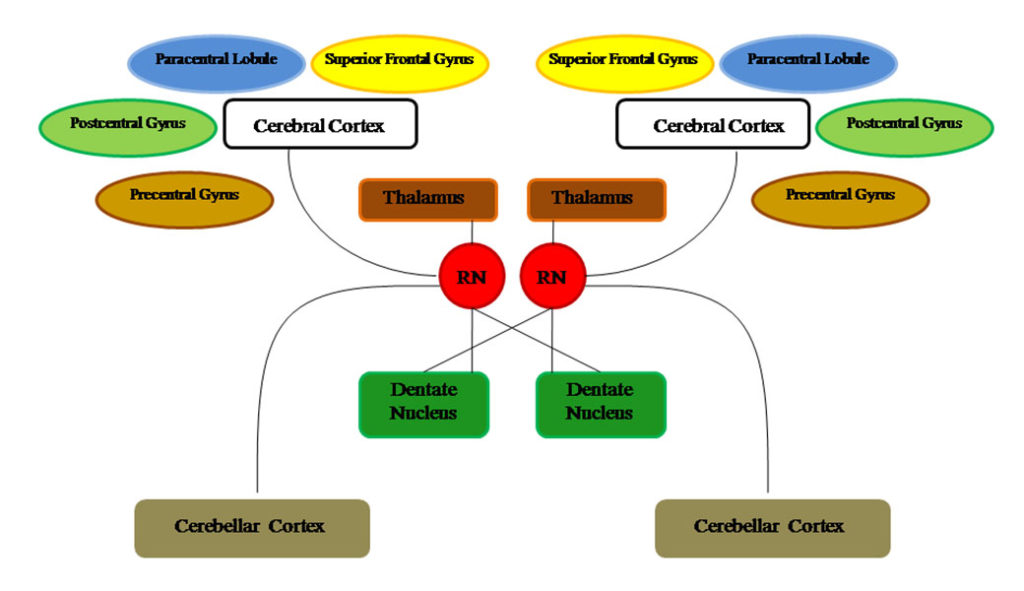 To this regard, our advanced diffusion modeling approach was not able to identify this fiber bundle. Although, rubropallidal connections were reported by using single tensor-based tractography, these findings could reflect erroneous computation, showing thalamo-pallidal fibers rather than rubro-pallidal ones due to the limitation of the traditional diffusion tensor-based technique.

For each of the reconstructed pathways, we also provided a quantitative evaluation by calculating the connectivity strength based on the number of “streamlines” linking the RN to a certain region and by extracting diffusion-based parameters, which offer information on the anisotropic degree of the signal within a voxel.

We believe that these findings may be useful in a clinical context considering that RN is involved in motor control and it is known to have potential to compensate for corticospinal tract injuries.

In conclusion, dMRI and tractographic techniques represent a powerful approach to study RN and whole brain connectivity in human in vivo and non-invasively, thus bridging the gap towards an exhaustive mapping of the human brain connectome.