Marmosets know the meaning of a food call

Vocalisations that alert group-living animals to a food source play an essential role in survival. Do some species make specific calls for particular types of food (i.e., referential signals) and are these calls produced with the intention of letting others know where food is? Alternatively, food calls could be simply an emotional response to finding and/or consuming food without any intention of signalling to others. We studied three different food calls made by common marmosets. One food call (A) had been described previously, but the other two (B and C) were our discovery.

First, we determined the order in which they preferred four types of food. Live mealworms and crickets were preferred over fruit, banana and blueberries. Then we recorded the calls made when the marmosets were presented with these different types of food, first with a transparent lid covering the food dish and then with the lid removed. 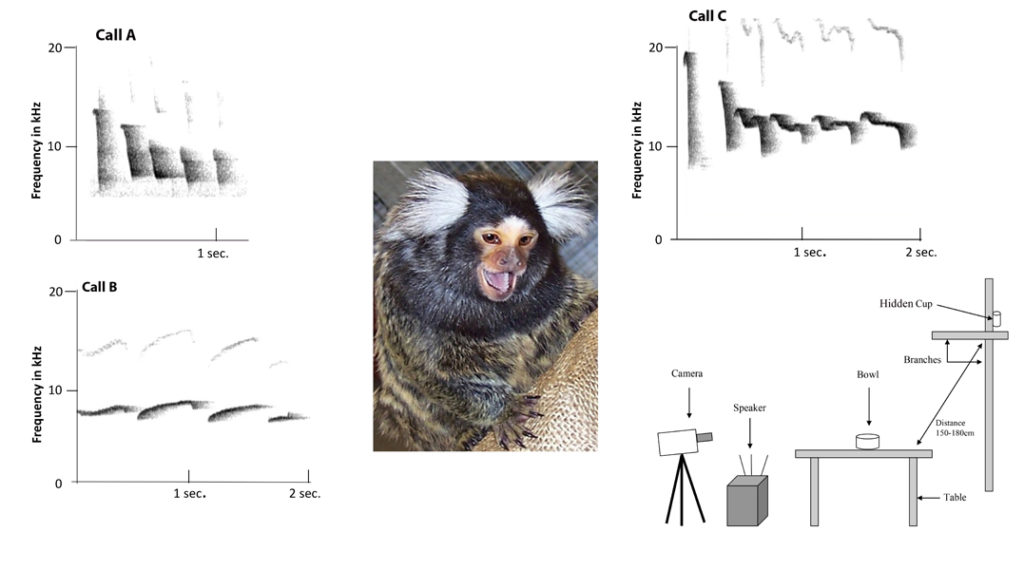 Fig. 1. Sonograms of the food calls and a diagram representing the apparatus used to test referential signalling. The sonograms are plots of frequency in kilohertz against time in seconds. Call A consists of loud, chirping sounds descending in frequency (pitch). Call B is a series of soft whistles with little variation in frequency. Call C is a sequence of long, loud squeals of overall descending pitch. At the bottom right side is a diagrammatic depiction of the set-up used to test whether a call signals meaning. The test begins with the marmoset eating banana from the bowl on the table. Then sounds are played via the speaker. Call A, call C or background sounds were played at the same intensity. Prior to testing the marmosets had learnt that insects were sometimes available in the cup hidden in the upper far corner of the room. Only on hearing call C did the marmoset being tested stop feeding from the bowl and go to look into the cup. This shows that call C has meaning that the marmoset understands: it is a referential food call.

Call B was made less often than A or C regardless of whether the food could be seen only or could be eaten. Since this was a soft call (of low intensity) we concluded that it was a close contact call made during feeding rather than a call soliciting group members to a food source.

Call C was the most promising because it was made when insects were presented and voiced more often when the marmosets could see but not obtain the insects. It was also made more often when a marmoset was alone than when tested together with another marmoset. This result indicated that it could be a signal to marmosets out of sight about the presence of a preferred food, perhaps specifically about insects. But, does a marmoset hearing call C understand that it means, “Insects are here/available to eat!”?

We tested this by playing recordings of food calls to marmosets that had been trained to find insects in a cup hidden in a distant corner of their testing room. The cup was baited with mealworms once a day and it had to be inspected at close quarters so that a marmoset could see whether it contained food. Each marmoset was tested alone and a test began by putting mashed banana in a bowl on a table in the centre of the room. Once the marmoset was eating the banana it was played a recording of either call A, call C or familiar background noise. If call C really signalled that insects are available, the marmoset should stop eating the less preferred banana, leave the table and go in search of insects in the cup. We scored their behaviour and the time taken from playing the sound to when the marmoset looked directly into the cup, often by inserting its face right into the cup. The results were significant: the marmosets rarely inspected the cup when call A or background noise was played but responded rapidly by inspecting the cup when call C was played.