Sickle cell anemia (SCA) is a hematologic disorder characterized by production of abnormal hemoglobin and often (50%) complicated with bone infraction, hip osteonecrosis etc. Surgical treatment of these complications is often postponed because of a variety of serious complications during surgery (perioperative and postoperative blood loss, wound abscess, and complications of blood transfusion). However in cases with resistant symptoms of hip osteonecrosis total hip arthroplasty (THA) is considered because it provides substantial pain relief and improved function in this population, which now has a life expectancy obviously greater than the prosthetic component survival. Most previous studies of THA in sickle cell disease (SCD) patients report an early infection and aseptic loosening. We present a rare case of a 27-year-old male SCA patient, who underwent in our department one-stage exchange arthroplasty for infection (Staph aureus) due to septic cup loosening six years after primary implantation (Fig. 1A). We have considered patient’s age and activity, multiple sickling crises in the past, needed hospitalization and transfusion, low haematocrit, difficulties in transfusion and transfusion reactions as well as the theoretical life expectancy in these patients. A cemented polyethylene, reinforced with metallic ring was fixed using bone cement with antibiotics. (Fig. 2B) During revision surgery there was excessive bleeding (1600 cc).Continuous irrigation containing antibiotics was subsequently applied for three days. On the second postoperative day, the patient developed a new severe sickling crisis (hemolysis with hematocrit drop) with fever. The patient was postoperatively given intravenous antibiotics according to culture sensitivity for six weeks.

Fig. 1. A. Primary implantation of a Uncemented total hip arthroplasty. B. Immediately before revision surgery in our department. Note the change of orientation of the cup and the quality of the pelvis bone in sickle cell anemia

Seventeen years following revision surgery, the patient was transferred to our institution for inability to walk, shortening of his left limb but no pain or fever. The physical examination showed a restricted passive motion in the affected hip joint and a fistula over the left trochanter (hip) with increased secretion. Plain roentgenograms revealed massive acetabular and left hemipelvis destruction with intrapelvic migration of acetabular component, associated with ipsilateral periprosthetic osteolysis at the proximal end of the femur. Computed tomography scan of the pelvis demonstrated a huge intra-/ extra- pelvic mass surrounding the acetabular component with massive destructive osteolysis of the left iliac bone (Fig. 2). Because of the poor general medical condition of the patient and the associated intraoperative risk, a major surgery was not recommended. The patient denied any further operative procedures and died two months later because of acute heart infarct. 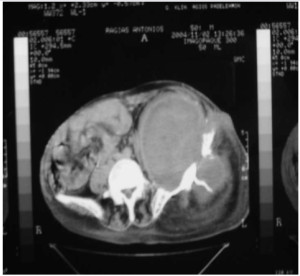 Fig. 2. Massive abscess formation in the left hemipelvis with severe destruction of the bone by the infection.

THA is effective for pain management in SCD, but has high rates of complications (ranging from 27%-67%) and revisions. Loosening is the major orthopaedic complication in SCA patients with THA. In our case, the possible causes for loosening of the polyethylene screw socket six years following primary implantation, should be either a hematogenous infection, which is a common complication in these patients. The severe periprosthetic osteolysis and massive pelvic destruction, that were revealed seventeen years following revision surgery in our case, should have been caused by either latent infection due to insufficient revision surgery (replacement of the acetabular component only) or new episodes of hematogenous septic embolization or polyethylene debris or combination of all them.

In most of the similar previously published studies in patients with SCD undergoing primary or exchange THA the complications rates are extremely high as in our case. Regular follow up observation of these patients receiving THAs are mandatory for early detection of such a disastrous potential fatal complication.