Mechanical vibrations can indicate if a fracture is healing

One of the most critical issues in orthopaedics is the development of a procedure for assessing fracture healing in an objective way and by means of a non-invasive approach, replacing the actual gold standard based on X-rays. Many solutions have been proposed in the last decades, based on different principles from the estimation of a static bending stiffness, to ultrasounds and mechanical vibrations. However, a reliable solution has not been defined yet.

The application of the mechanical vibration approach to fracture healing assessment dates back to the 90ies when first promising results were obtained also in in-vivo tests. Nonetheless, this approach was abandoned, maybe due the complexity of the experimental instrumentation and of data processing. Recent improvements of technologies along with development of novel and fast algorithms for vibrational data processing have motivated the re-evaluation of this approach to monitor bone fractures. The fundamental idea at the basis of this approach is that the bone stiffness changes during healing, typically increases as the callus evolves towards a healed bone tissue, and stiffness affects the way the system vibrates, i.e. resontant frequencies and shapes. Indeed, frequencies increase when stiffness increases. These vibrational features can be obtained by means of impact tests (Fig. 1a), which mainly consist of repeated hits through an instrumented micro-hammer (as source of vibrations – IN) with simultaneous acquisition of the acceleration of some points of the structure through accelerometers (OUT). Processing the waveform of IN-OUT signals in the frequency field, the so-called Frequency Response Function (FRF) can be obtained, which can be used for identifying the resonant frequencies (Fig. 1b).

Our research group has been focused on the application of the mechanical vibration approach to fractures treated with an external fixator, where the pins screwed into the bone can be conveniently exploited to excite the bone and capture its response during impact tests. Transmission through the soft tissues can thus be prevented and the quality of the signals improved. 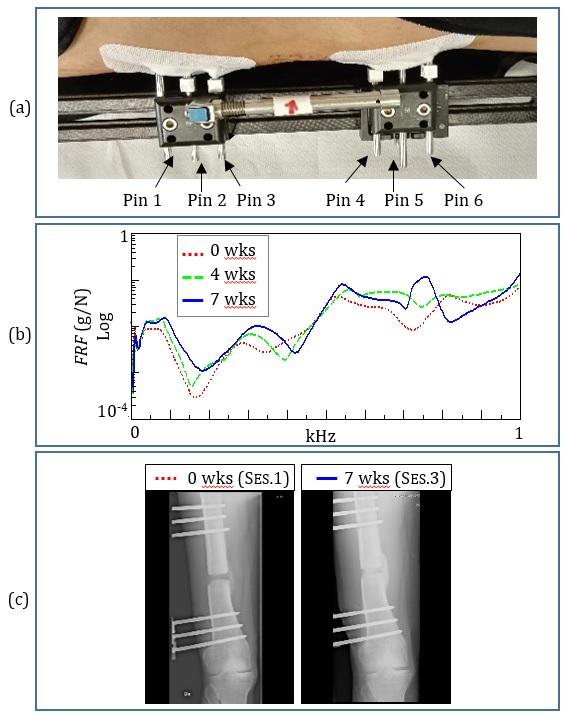 Fig. 2. (a) Picture of the fixator in the initial configuration with six pins. (b) Evolution of FRFs in the first healing phase. (c) X-rays images of the fractured femur at the end of bone lengthening (0 wks) and at week 7.

After several preliminary tests on a tibia phantom, few in vivo measurements were carried out. One of the most interesting case was the application of mechanical vibrations to monitor the healing process of a lengthened femur with an external fixator (Fig. 2a). The impact tests campaign took five months with tests every 3-4 weeks. After seven weeks, some pins were removed due to infection, therefore two different configurations were considered: before and after pin removal. This is important because, to be sure that a variation on the resonant frequencies can be ascribed to a variation of the stiffness, no other modification should alter the system. The FRFs and the resonant frequencies of the system were estimated for each session of the monitoring period. An example is shown in Figure 2b for the three test sessions in the first configuration with six pins. The impact testing results were compared to the indications provided by X-ray images (Fig. 2c). It was observed that in the initial healing phase, the resonant frequencies increased by about 2-3% per week. The largest increase (around 22%) was observed for the first resonant frequency. In a second phase, probably after the formation of the woven bone, the vibratory response remained almost unchanged. The results presented support the application of the impact testing approach for fracture healing assessment.