Exploiting chemical or biological reactions by different spectroscopic techniques has become a powerful method for mechanistic analysis. Such studies enable chemists to understand several reaction features, optimize reaction conditions and yield, develop cost-effective synthetic methodologies, and predict new reactions. Therefore, mechanistic investigations are one of the most fundamental frontiers in modern chemistry. Development of several spectroscopic techniques in the last hundred years has made important contributions to detect transient species or intermediates formed during the progress of a reaction. Use of different physical organic techniques along with absorption spectroscopy has developed a standard practice to detect intermediate species for proposing a reaction mechanism. Although, several spectroscopic techniques like NMR, EPR, UV-Vis, IR, X-Ray, ORD/CD, ultrafast laser, fluorescence and Raman spectroscopy are routinely being used for analysis of reaction mechanism, mass spectrometry is still an under-utilized tool despite its remarkable sensitivity and specificity. However, development of different ambient ionization techniques in the last 15 years has bestowed a method for rapid sampling and analyzing chemical species using mass spectrometry. In the late 1980s, Fenn group’s groundbreaking discovery of ionizing large biomolecules (proteins) from charged microdroplets led to the development of electrospray ionization mass spectrometry. Since then, a variety of microdroplet-based mass spectrometry have been developed by several groups.

Fig. 1. Schematic diagram showing the use of (a) DESI-MS and (b) online ESI-MS to intercept transient intermediates formed during the progress of the reaction, allowing us to monitor the reaction in real time.

In a recently published article by Banerjee et al., we have demonstrated the use of two microdroplet-based mass spectrometry techniques, e.g., desorption electrospray ionization mass spectrometry (DESI-MS; Fig. 1a) and online electrospray ionization mass spectrometry (ESI-MS; Fig. 1b) to rapidly intercept transient fleeting intermediates from a copper-catalyzed reaction to monitor the reaction in real time in order to propose the mechanism of the reaction. Figure 1a presents a copper-catalyzed C-H oxidative cyclization of carboxylic acid, which was studied by us. The reaction mixture was directly sampled to a high-resolution mass spectrometer by means of microdroplets generated by electrospray (Fig. 1). Either solvent microdroplets were allowed to extract the chemical species present in the reaction aliquot (Fig. 1a) or the reaction aliquot itself was continuously sprayed to the mass spectrometer by the online mass spectrometry technique (Fig. 1b). These techniques have enabled direct capture of transient intermediates derived from both substrate and copper catalyst, allowing us to posit a possible mechanistic scheme for this cyclization reaction (Fig. 2b). Importantly, we detected all intermediates (2, 3, 5) either directly or indirectly (trapped with other species) and also found that reaction is driven by the redox cycling of the copper ion. Species were detected by high mass accuracy, isotopic distribution, and tandem mass spectrometry. Reduction of Cu(II) in the presence of strong oxidizing agent (persulfate) is another noticeable feature of this reaction. Although it is only possible to disprove a proposed mechanism and not prove it, the weight of all evidence supports a pathway for lactone formation that initiates through benzylic C–H abstraction by sulfate radical anion and proceeds through an intermediate carbocation, which is trapped by the pendant carboxylic acid (or by H2O). Our conclusion (Fig. 2b) differs from prior literature reports for related processes, which suggested that intramolecular C–H abstraction by a carboxylate radical initiates the cyclization event. 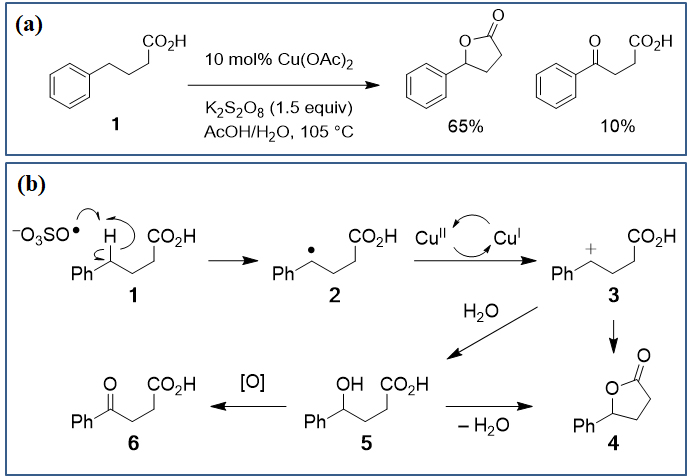 Fig. 2. Copper-catalyzed oxidative cyclization of a typical carboxylic acid showing the (a) scheme of the reaction and (b) the proposed mechanism based on the detection of each intermediates by ambient ionization mass spectrometry techniques.

Overall, the above study highlights the utility of microdroplet-based mass spectrometry for the analysis of complex, multicomponent reactions, particularly those involving short-lived, redox-reactive species and kinetically labile transition metal salts.