In Bosnia and Herzegovina (BA) from 1878 to 1945 medical article published in Medical and Non-medical Journals.

The first medical journal in BA may be deemed to be Jahrbuch des Bosnisch-Hercegowinischen Landesspittales in Sarajevo (The Yearbook of the National Hospital of Bosnia and Herzegovina in Sarajevo). In a special part of this journal, doctors from Austro-Hungary serving in Sarajevo wrote scholarly articles about their patients’ various ailments. 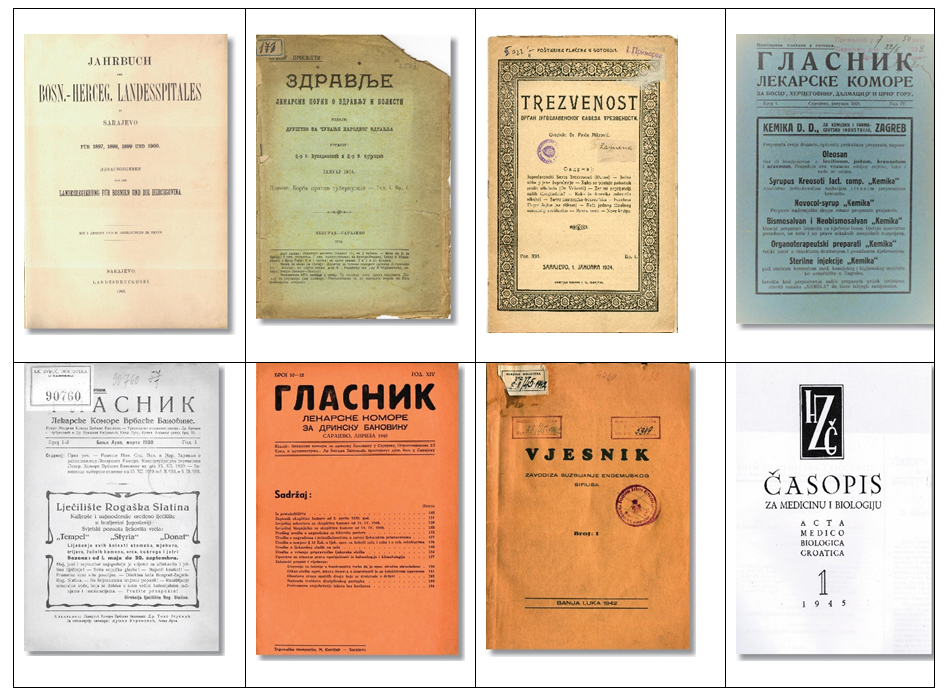 Beside that in the period from 1878 to 1945 articles on medical subjects were quite often published in journals issued by cultural and educational institutions, and cultural and educational societies. One of those journals was Glasnik Zemaljskog muzeja u Bosni i Hercegovini (The Herald of the National Museum of Bosnia and Herzegovina) (Herald), which began to the published in 1889 and was the first journal to be published in BA with scholarly and scientific ambitions.

They were Školski vijesnik, (School Journal) a journal published by the national government for Bosnia and Herzegovina,  Prosvjeta, (Education) the Journal of the Prosvjeta society (Education), even had a separate section in issue 9 in 1919 entitled “Public Health” with 18 articles from the field of medicine, written on pages 149 to 180, Novi Behar, (New Be-Har) the journal of the Muslim cultural society “Narodna uzdanica”, (National Hope) in issue 12-13 of 1944 published four medical articles  and Napredak (Progress) the Croatian national calendar, the journal of the Croatian cultural society of the same name, based in Sarajevo.

The medical and non-medical journals mentioned above were issued or appeared in BA at times when it was not independent, and was under the influence of the health culture of the occupying authorities and ruling regimes. At times which were marked by two world wars, specific political and social circumstances, standard of living was very low throughout BA; the hygienic standards of the population were poor, particularly in the rural areas. The common people believed that ‘God had given disease’ and that ‘God would make the disease disappear’. In this situation, medical articles published in the aforementioned journals were welcomed and were very important for improving the health education of people from BA.

Medical Journals in Bosnia and Herzegovina from 1878 to 1945.
Tahirović H, Tahirović E
Acta Med Acad. 2018 May