Mediterranean diet and liver steatosis: the importance of polyphenols

In November 2010 UNESCO officially recognized the Mediterranean diet as an Intangible Cultural Heritage of Humanity and defines it as a “set of traditional practices, knowledge and skills passed on from generation to generation, providing a sense of belonging and continuity to the concerned communities”. Mediterranean diet is a way of eating, rather than a formal diet plan. The exact Mediterranean diet is difficult to define precisely, if considered that Mediterranean region is a virtual geographic area that represents many cultures and lifestyles. The traditional Mediterranean diet can be represented by a pyramid characterized by the high consumption of cereals and vegetables, such as salads, pulses/legumes, bread, pasta, fruits and nuts and low intakes of eggs and sweets. Extra-virgin olive oil is the main source of fat with a moderate intake of fish, poultry, eggs and dairy products. In addition, moderate amounts of red wine are usually consumed with meals in the European region of the Mediterranean area. 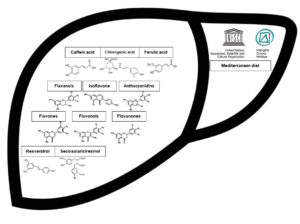 Adherence to the traditional Mediterranean diet is associated low mortality risk and reduced incidence of chronic diseases and in particular cardiovascular and metabolic disorders, neurodegenerative diseases, depression and several types of cancer. These protective effects are related to the high concentration of antioxidants in compounds of this diet. Actually the standard care to treat patients with liver steatosis, is focused on lifestyle interventions and in particular health diet and physical exercise. In this way, literature was reported the benefits of Mediterranean diet.

Polyphenols are heterogeneous class of plant derived compounds, that include several hydro soluble antioxidants reported as health promoting agents and proposed in the treatment of different metabolic disorders. Fruits, vegetables, beverages including coffee, tea, red wine, and dark chocolate are important sources of these bioactive compounds. On the basis of their chemical structure, two categories of polyphenols are described: the flavonoids containing a common diphenylpropane skeleton (e.g., flavonoids, flavones, flavanols, flavonols, isoflavones, proanthocyanidins and anthocyanins); the non-flavonoids mainly comprising mono-phenols alcohols (e.g., hydroxytyrosol) or stilbene phenolic acids (e.g., resveratrol). Polyphenols are not essential for life as vitamins in the short-term. However, nowadays are considered responsible for the beneficial effects of fruits and vegetables. Their potential role in the prevention and treatment of oxidative stress and inflammation has been recently investigated. In particular, polyphenols may present hepatoprotective effects by increasing of fatty acid oxidation and the modulation of insulin resistance, oxidative stress and inflammation, that are the main pathogenetic factors linked to the progression from simple fat accumulation to steato-hepatitis. Several evidences in vitro, pre-clinical and emerging clinical trials reported beneficial effects on liver steatosis and its pathogenic and clinical setting.

Considered that liver steatosis is actually the board of over nutrition and an upcoming challenge for health systems worldwide, it possible to conclude that adherence to the traditional Mediterranean diet characterized by consumption of antioxidant-rich foods in general and of polyphenols in particular, can be considered as a potential new therapeutic approach to hepatic fat accumulation and its sequelae, and even a valuable instrument of prevention of metabolic disorders in general. Further studies are needed to define the achievable doses of individual polyphenols or select their combination.