Available freshwater is frequently wasted and contaminated by human activities. This, coupled with a number of environmental factors (droughts, floods, etc.), is causing serious problems of global freshwater scarcity. To mitigate this problem, alternatives to the use of freshwater have been developed, such as the reuse of urban treated wastewater, also called reclaimed wastewater. Water reuse for irrigation in agriculture is of increasing interest because this sector is the highest freshwater consumer globally. However, wastewater often contains a variety of contaminants: salts, metals, pathogens, organic hazardous pollutants, endocrine disrupting compounds and personal care products. 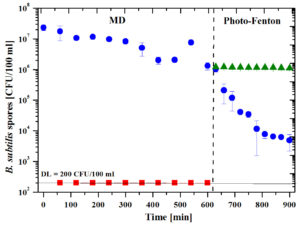 Any of these can damage human health and the environment. Specifically, pathogens causing infectious diseases constitute one of the health risks associated with urban wastewater and have been identified as the main cause of contamination in rivers. Therefore, wastewater reuse requires effective disinfection processes after treated in a wastewater treatment plant. There are different technologies for water disinfection, conventional technologies include physical removal of microorganisms by membrane filtration and ultraviolet radiation and chemical elimination with chlorine or derivates and ozone. In addition, new disinfection technologies have been developed, such as Advanced Oxidation Processes (AOPs) which consist of several oxidative reactions leading to the generation of hydroxyl radicals which non-selectively oxidize the contaminants into water, inorganic ions, and carbon dioxide. One of these is photo-Fenton, consisting on irradiating the contaminated water with UV-Vis light in presence of H2O2 and Fe2+salts. These processes may be used effectively for the removal (i.e. inactivation) of a number of microbial pathogens commonly found in water and wastewater. However, the effectiveness of these disinfection treatments is largely limited with some resistant pathogens such as Clostridium spp. This microorganism is a genus of bacteria that cause diseases constituting a risk to the human and animal health. It is capable of producing spores, a cell resistant form generated to survive for a long time under adverse conditions. 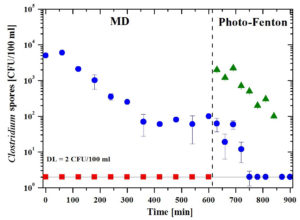 Novel technologies are being used to try to eliminate these resistant spores. Also those of B. subtilis, a non-pathogenic bacterium for humans, but whose spores are used to model water pathogens that are very resistant to disinfection techniques. One of the most novel disinfection technologies is Membrane Distillation (MD), a non-isothermal separation technology using a hydrophobic microporous membrane. The membrane does not allow liquids to pass, only vapour. Thus, if a vapour pressure difference is established with a temperature difference across the membrane, a vapour flux is established through the pores of the membrane, and when vapour condenses, pure water is produced. Specifically, this study consisted of verifying the viability of MD for extracting pure water from polluted waters and studying the effect of its hybridization with photo-Fenton for the disinfection of wastewater. For that, sea water contaminated with spores of B. subtilis and an effluent of an urban wastewater treatment plant with natural presence of spores of Clostidium spp were treated. Figures 1 and 2 show the concentration of spores of B. subtilis and Clostridium spp respectively during the combined treatment of MD with photo-Fenton (feed and permeate) and when only photo-Fenton was used as disinfection process. In both cases, the obtained permeate from MD was free of spores, demonstrating the viability of MD to obtain reusable effluents. In addition, its hybridization with photo-Fenton process achieved a significant reduction of the concentration of spores in the two solutions, reaching values below the detection limit in the wastewater. On the contrary, when only photo-Fenton was used to disinfect the water, a significant reduction in the concentration of these spores was not achieved in either case.