Alzheimer disease (AD) is the most common form of dementia worldwide. AD is characterized by progressive decline in cognitive functions. In the initial stages, deterioration of memory and loss of other intellectual abilities start to interfere with activities of daily living. Although AD mechanism is not known yet, it is now admitted that amyloid plaque accumulation is involved. Parallel to it, a small structure present in cerebral ventricles, the choroid plexus (CP) is a singular form of blood-brain barrier and is now of increasing interest in AD research. Indeed, CP is known to have a major neuroprotective function, such as removing amyloid protein from the brain and earliest findings highlighted the crucial role of CP in neurodegenerative diseases. 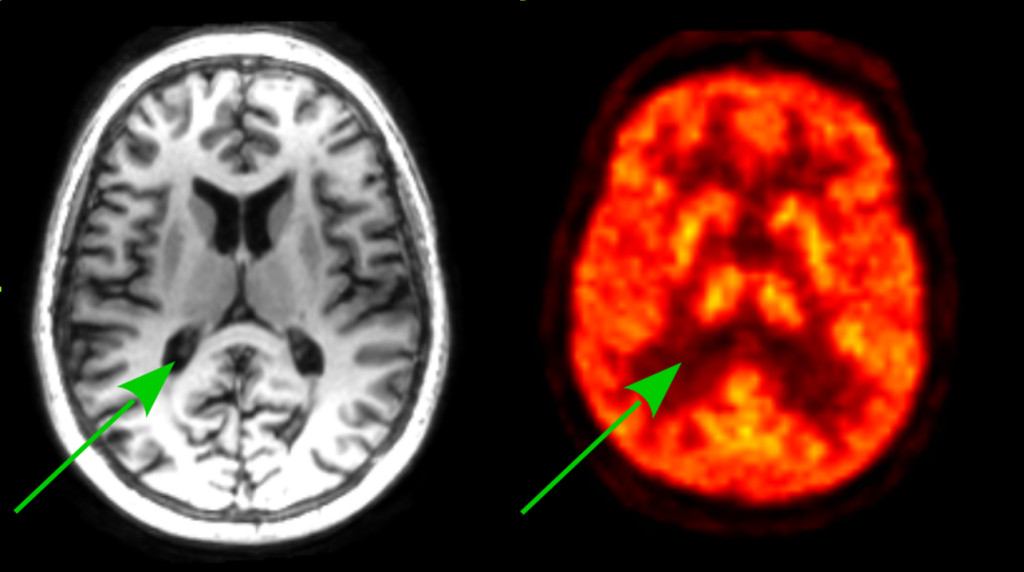 Fig. 1. On the left, a magnetic resonance image of brain showing choroid plexus (arrow). On the right, the corresponding FDG PET image. Choroid plexus is not visible to the eye making the need of computer and automated extraction mandatory.

Conventional imaging techniques, such as magnetic resonance imaging, can provide morphological information on the CP, but they are unable to explore its functional status. Positron emission tomography (PET) is an imaging modality that enables various physiological processes to be studied in vivo by detecting a radioactive medication (called radiotracer) mimicking a natural  molecule to follow its specific metabolism. In addition, if PET images are usually acquired at single time point, it is also possible to follow these molecules during time to explore the evolution in various structures. The most commonly used radiotracer is called fluoro-deoxyglucose (FDG), which is a glucose analogous, as it allows to assess the cells’ energetic activity, notably in brain, glucose being the primary source of cellular energy (Fig. 1.).

In our study, we aimed to highlight the alteration of CP glucose metabolism in AD. In this clinical trial, healthy elderly, AD patients and a third group consisting in slight memory and cognitive impaired people (called MCI for mild cognitive impairment) underwent dynamic PET with FDG to measure the FDG uptake in CP during time. Technically speaking, we took advantage of the singular FDG uptake temporal pattern in CP to automatically extract this structure and then obtain that we called the CP’s tissue-time activity curves. Moreover, we also measured FDG dynamic uptake in the cerebro-spinal fluid surrounding CP (Fig. 2.).

Fig. 2. On the left: tissue-time activity curves obtained in CSF (blue) and CP (red) in healthy subjects. On the right, curves obtained in AD patients. It is noteworthy that CP curve is lower in AD than healthy elderly whereas activity in CSF is higher. In addition, CP-CSF FDG equilibrium is lost in AD as both curves do not cross.

We found that, although FDG uptake patterns were similar in healthy subjects, MCI and AD patients, the activity in CP gradually decreased as cognitive decline worsened. Moreover, we discovered that an FDG equilibrium existed between CSF and CP in healthy subjects. This equilibrium was not found in MCI or AD patients. We therefore hypothesized that the ability of the CP to sense glucose is altered in dementia, resulting in impaired glucose regulation in the brain as a whole. The “glucose-sensing” hypothesis is mainly based on two recent findings: (i) expression of genes coding for glucose regulation and associated proteins in the CPs and (ii) the presence of glucose-specific enzymes  transporters in periventricular regions of the brain.

In summary, our findings strengthened previous studies claiming that the brain-CSF barrier was altered in Alzheimer disease. Our imaging method highlighted a deficit of glucose metabolism in the choroid plexus. Impaired CP function may be related to an alteration in the CSF–CP glucose equilibrium.

Further insight into how the underlying pathological mechanism of AD influences the CPs could lead to new approaches to the treatment of dementia in AD and related conditions.