Metabolic regulation by the intestinal hormone FGF19: From basic science to clinical application

Physiological adaptations of our body to changes in nutritional status induced by fasting or food intake occur various times per day and are crucial to maintain a healthy metabolic state. To meet this requirement, our body is able to produce a number of hormones such as insulin or glucagon that are released in times of high or low energy supply, respectively. These hormones induce a number of different adaptive reactions in metabolically active organs including the liver, adipose tissue, muscle or brain to counterbalance the excessive or insufficient supply of energy. An impairment of these adaptive mechanisms can cause metabolic disorders such as obesity or type 2 diabetes which represent rapidly increasing problems in many industrialized countries.

Within the last couple of years, a number of research studies have defined Fibroblast Growth Factor 19 (FGF19) as a novel and important player in the scenario of metabolic regulation. FGF19 is a hormone that is produced by cells of the small intestine and to some extend mimics the effect of insulin. Similar to insulin, FGF19 is a protein that is released into the blood stream after a meal and induces certain physiological adaptations in response to high energy status. In the liver, both FGF19 and insulin are able to enhance the synthesis of glycogen (the storage form of glucose) and to suppress the production of “new” glucose from other nutrients (a process called “gluconeogenesis”). In contrast to insulin, serum levels of FGF19 peak about two to four hours after a meal (between a few minutes and one hour for insulin) and FGF19 does not stimulate the storage of lipids in the liver but rather counteracts this by enhancing the oxidation of fatty acids. In addition to the liver, FGF19 controls a number of further important physiological responses in other organs such as adipose tissue or brain. 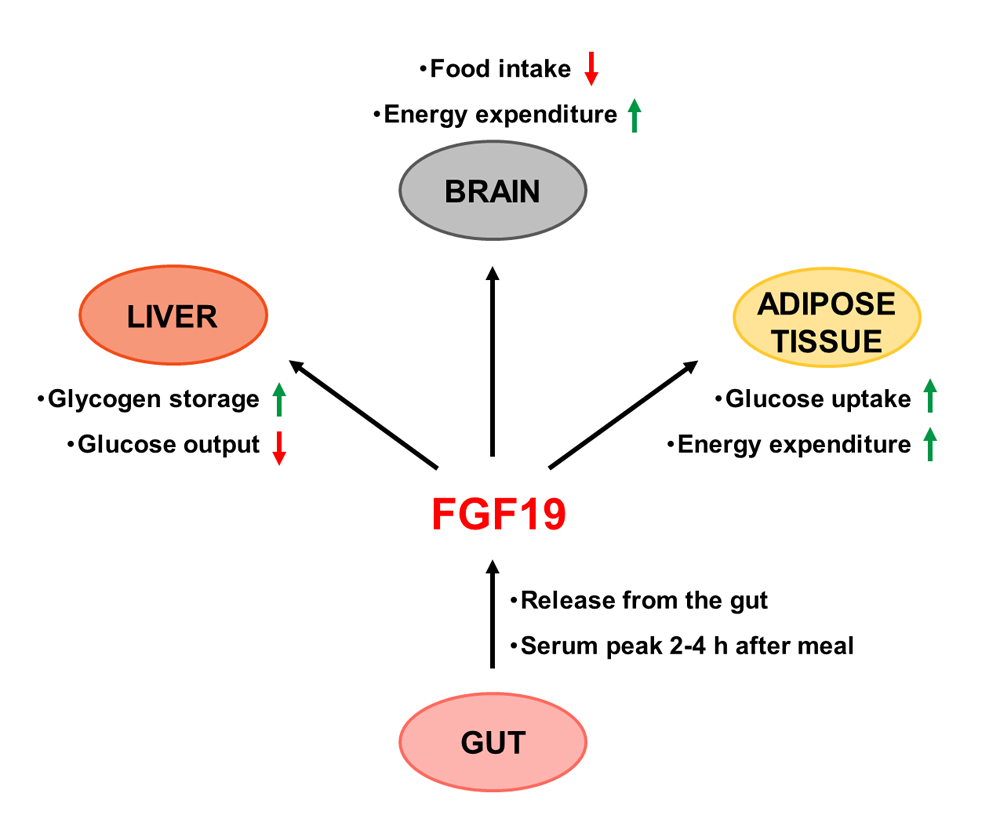 FGF19 has gained a lot of interest as a potential drug target to treat metabolic disorders. Among various other important findings, this interest was strongly promoted by observations made in obese animal models demonstrating that high levels of FGF19 can induce weight loss and improve a number of metabolic parameters associated with obesity such as hyperlipidemia and glucose intolerance. In line with the view of FGF19 as a possible future drug target, its physiology is altered in a number of human disorders including obesity, type 2 diabetes or fatty liver disease in which either its release from the intestine or the physiological response in its target organs are partially impaired.

Opposed to these considerations, the clinical usefulness of FGF19 is still limited by the fact that this protein is a potent growth signal to stimulate cell proliferation and thus might possibly trigger tumor development. Several recently published studies on FGF19 physiology have, however, revealed interesting new options to overcome this problem by engineering artificial FGF19 variants that are devoid of any pro-tumorigenic properties but still retain their beneficial metabolic actions in cell culture or animal models. Some of these engineered FGF19 variants are presently tested in first clinical trials and their outcome will determine the future usefulness of this protein as therapeutic drug in human patients.

For a broader and more detailed overview on the metabolic actions of FGF19 as well as on the mechanisms of its release from the gut and the alterations of its physiology that occur in human disorders, the reader is referred to our current review article “Mechanisms of enterohepatic fibroblast growth factor 15/19 signaling in health and disease”.