Breast cancer is the most common cancer in women and, despite significant progress in diagnosis and treatments, incidence has been steadily increasing in the last 40 years. Approximately 70% of breast cancers are characterised by the expression of oestrogen receptor alpha (ERα) which is the main driver of cell proliferation and tumour growth. Hence a therapy targeting the receptor has become the standard of treatment in breast cancer patients who are ERα positive. Although these drugs are particularly effective, over 30% of these patients eventually develop disease recurrence often due to therapy resistance. Resistance to therapies involves several events but none of these has been identified as the main factor for the tumour relapse yet. 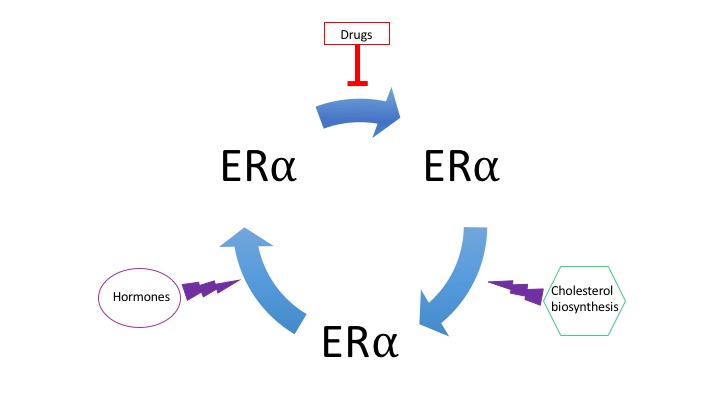 The capability of tumour cells of modifying their metabolism in order to effectively support uncontrolled growth and proliferation has been recently highlighted to be one of the emerging hallmarks of cancer. At a clinical level, recent evidences also show obesity and hypercholesterolemia be two of the strongest risk factors for breast cancer development. This review is focused on our previously published results where we showed how cholesterol biosinthesis is involved in breast cancer progression and drug resistance.

As there are at least three different ways of targeting ERα, in principle it was not clear if the specific type of treatment would play a significant role in activating different types of resistance. Our study has characterized, for the first time, the net effect of each treatment with a particular focus on the changes occurring in response to each therapy. Specifically, we investigated why cells developing drug resistance to aromatase inhibitors (the most used type of endocrine treatment) start to produce cholesterol leading to sustained ERα activation and growth. Our work demonstrated that cholesterol biosynthesis activation is not the results of mutations, changes in the DNA that normally contribute to tumor formation. On the other hand, cholesterol biosynthesis was driven by changes in accessory chemical modifications found on the DNA scaffold called chromatin. These modifications normally drive tissue differentiation, but in our model they were associated with the activation of cholesterol biosynthesis in drug resistant cells.

Several compounds are available to block cholesterol synthesis, for example statins. Treatment of resistant cells with these drugs shows promising results as we were able to stop them from invading nearby tissues. Other therapies that are already on the market are also under investigation for potential benefit in breast cancer in addition to statins. For example, bisphosphonates are designed to treat osteoporosis but they are also efficient in suppressing the cholesterol pathway.

Our findings converge to a unique scenario where the reprogrammed metabolism plays a key role for growth and proliferation of invasive cancer cells. In this focused review we speculate about the possible models explaining therapy-resistant cancer cells behavior. One possible model could be recalled from the concept of “Terraforming”, based on the hypothetical modifications of a planet environment in order to be similar to the Earth. Translating this idea at a biological level, similarly cancer cells could change the microenvironment in order to create a more habitable one suggesting that the tumor might “farm” the stroma for its own needs.

However, an alternative model might exist. In the supply-based model, proliferating cells are reprogrammed to meet the challenges of colonizing different environments such as lung, bones, liver or brain. Metabolic rewiring is crucial to provide endogenous nutrients in order to metastasize. In this microenvironment independent model, a subgroup of reprogrammed cancer cells behaves like pioneers becoming invasive and able to colonize and adapt to different microenvironments. Indeed, cholesterol biosynthesis could operate as a survival toolkit in order for the pioneer metastatic cell to be able to invade a new environment and survive.

Overall, the results from our study represent a step toward drug resistance mechanisms providing evidence that anticancer effects can be potentiated by combining different types of therapies with strategies depriving the tumor of cholesterol.