Metal–organic framework for “NO” sensing!

Nitric oxide (NO) is a free radical which is found to prevail as a colourless gas. It has a very short life-time (of few seconds) and yet regulates several biological processes in living systems. For its participation in many physiological and pathological processes, NO has been looked upon as a key signalling molecule to understanding the mechanistic insights of such systems. The importance of studies on NO and its biological functions can be appreciated from the recognition it has received over the years, for example – molecule of the year (1992) and the Nobel Prize in 1998 for the role of NO as a signalling agent for cardiovascular processes. Among all the methods trialled to probe the reactivity of signalling molecules in living cells, fluorescence based methods have been found to be more suited owing to higher sensitivity, fast detection, relatively easier sample preparation and unsophisticated set-up for real-time applicability. 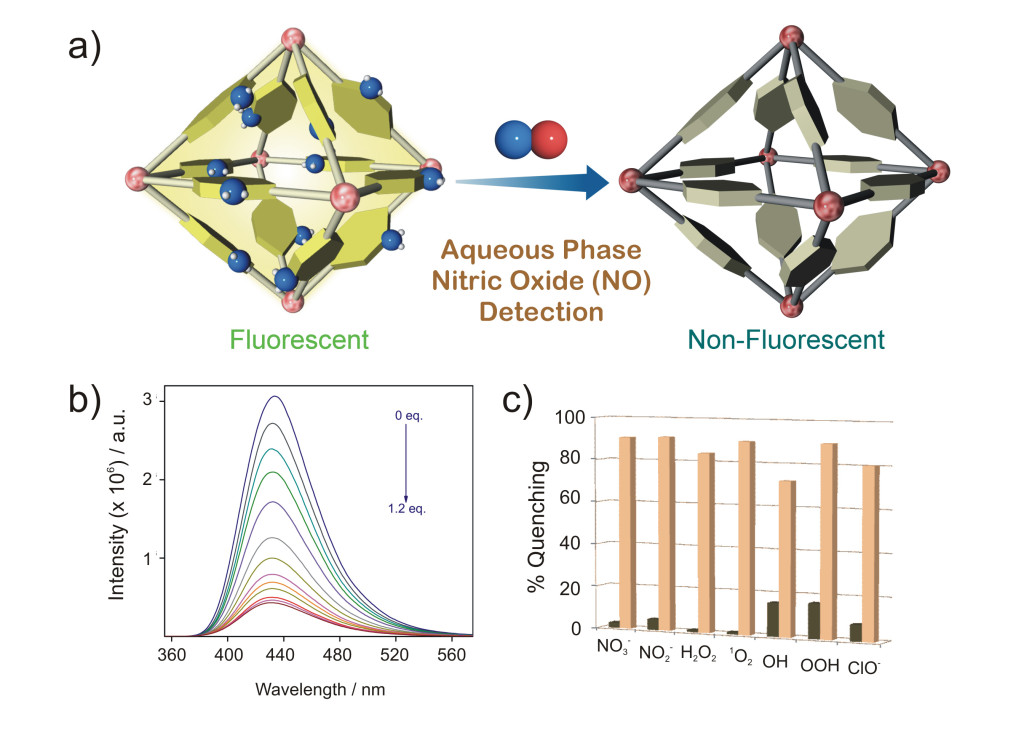 Few luminescent organic molecules have been found to respond to nitric oxide in a selective manner, and so have a few inorganic complexes. In the former case the reaction of a particular functional group with nitric oxide has been exploited as the mechanism, while in the latter case the feasibility of multivariate oxidation states of metal ions has been exploited by the reductive nature of NO. The poor solubility of organic molecules & lack of stability of inorganic complexes in aqueous medium has propelled material chemists to pursue development of newer materials. In this regard metal-organic frameworks (MOFs) have been looked upon as the precise target probe compounds which combine the benefits of both organic molecules and metal ions. MOFs are porous crystalline solids having polymeric structures which are held by strong coordination bonds. These compounds comprise of bi- or multi-dentate organic ligands and have metal ion nodes arranged in a periodic manner infinitely. This permits the functionalization of the pore surface either via pre- or post-synthetic modification to have the desired pendant group appended.

We sought to encompass free primary amine groups in a water stable porous MOF viz. UiO-66@NH2 (1-NH2), having understood from the literature about aromatic amines undergoing deamination reaction in presence of NO under aerated aqueous conditions (Fig. 1a). To understand the sensing behaviour of the compound, 1-NH2 was dispersed in HEPES buffer (10 mM, pH 7.4) to mimic cellular environment. After equilibration, the emission profile was recorded which was found to be highly intense (on-state). To this dispersion, NO was added in equal portions and allowed to react after each addition. The peak maximum of the compound was found to decrease gradually and found to reach the off-state (~80% quenching) after the addition of 1 equivalent NO, with a limit of detection (LOD) found to be 0.575 mM (Fig. 1b). The same protocol employed for similarly reactive nitrogen/oxygen species (RNS/ROS) like H2O2, ClO–, ·OH, ·OOH, 1O2, NO3– and NO2– which did not perturb the emission intensity of 1-NH2. This selective performance was found to be retained even when NO was added in concurrent presence of the respective RNS/ROS analytes (Fig. 1c).

In summary, we have explored the possibility of a pre-functionalized, biocompatible MOF as a selective sensor of nitric oxide. The results contribute to growing interest in the investigation of MOF-based probes for biologically relevant species.