Cilia are slender microtubule-based organelles that protrude from the apical membrane in most adherent cells. Studies looking into the mechanosensory function of the primary cilium have proved it to be an essential cellular organelle. When exposed to fluid flow, the flexible cilia bend and induces an intracellular calcium (Ca2+) influx followed by a Ca2+ increase throughout the cell. The initial influx has been attributed to the mechanosensory complex of polycystins in the ciliary membrane. Ca2+ are essential in biological systems as a secondary messenger and are involved in various function like regulating vascular tone, neurotransmitter release, muscle contraction, immune responses among many others. Thus, the ciliary Ca2+ influx in response to fluid flow can be a functional readout of cilia function. Technologies to study and measure functional ciliary Ca2+ changes are critical to understanding the changes occurring due to dysfunctional cilia. Over 20 ciliopathies, a spectrum of chronic multi-system disorders, have been identified which further bolsters the need to study the alterations in ciliary Ca2+ signaling in a live cell model. 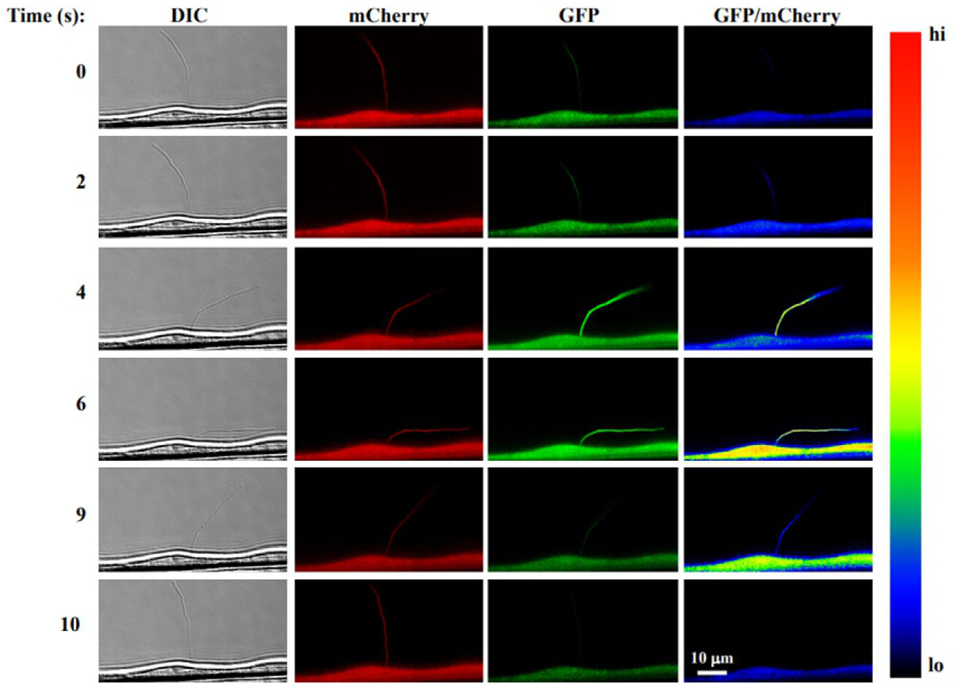 Among the key challenges to study cilia in living cells are their minute size and orientation. The primary cilia have a diameter around 200nm and unfortunately assumes a perpendicular orientation in relation to the cell monolayer. This limits the option to visualize the cilium together with the cytoplasm since they are at different planes of view. Secondly, traditional Ca2+ indicators fail to reach the cilioplasm due to the selective exclusion of most cellular components and exogenous compounds. To overcome this challenge, targeting modules have been utilized to transport cargo into the cilia. As an example, 5HT6-mCherry-G-GECO1.0 contains a cilium-targeting sequence derived from 5HT6, a serotonin receptor (Fig. 1). In 5HT6-mCherry-G-GECO1.0, the Ca2+ sensor G-GECO1.0 changes the fluorescence intensity of GFP with Ca2+ levels. In addition, the constant mCherry fluorescent marker is independent of Ca2+ flux serving as an aid in the visualization of ciliary movement, correction of artifacts, and ratiometric analysis of the data. There are a versatile number of calcium indicators and the choice is strictly determined by the needs of the researcher after evaluating key characteristics like the dynamic range, affinity (Kd) of the indicator for Ca2+, response kinetics, and targeting ability.

Fig. 2. Microwire with cells in a perfusion chamber. (A) In the diagram, the gasket is placed on the imaging dish in a manner to orient the microwire parallel to flow. Using lower magnifications, we can observe cells growing on the wire edge. At a higher magnification, the cilium protruding outward should become even clearer. We focus on a single cell and capture Ca2+ data in response to fluid flow. (B) Schematic of the experimental setup with stopcock valves to load and unload buffers into circulation.

In our experimental setup, cells are seeded on a microwire coated with collagen and then transfected with the 5HT6-mCherry-G-GECO1.0 construct (Fig. 2A). Proper microscope setup capable of rapid acquisition of GFP and mCherry signals at a speed compatible with the needs of the researcher is required. After the imaging chamber is set up, baseline measurement of the resting Ca2+ is acquired for 5 minutes followed by the introduction of flow with a peristaltic pump. The GFP intensity as a function of time will show an increase in signal intensity upon initiation of fluid flow. Depending on the experimental needs the buffers or treatments can be implemented using stopcock valves to introduce new perfusate and simultaneously eliminate the initial circulating buffer (Fig. 2B). In each experiment, minimum fluorescence intensity is measured during a Ca2+-free solution containing EGTA and ionomycin. The treatment with ionomycin/EGTA causes a transient increase due to the extracellular Ca2+ entry from the ionomycin-induced pore formation followed by a slow decline in Ca2+ signal due to the Ca2+ chelator EGTA. In contrast, a buffer of Ca2+ (10mM) is introduced to obtain a maximum signal. These steps ensure that the sensor maintains the dynamic range (or Kd) and is responding to the ambient Ca2+ concentration.