In recent years, the development of new drugs and therapies has decelerated despite the application of combinatorial biochemistry and new therapeutic strategies, such as nanoparticle-based drug delivery systems. Although the numbers of newly developed compounds have steadily increased, regulatory approval rates are declining while attrition rates during phase 2 and 3 clinical trials are on the rise. In other words, despite initial successful animal testing drug failure remains high, thus putting a huge cost and time burden on pharmaceutical companies. Some of the general problems associated with animal testing include reproducible animal growth, health status, weight, diet, and method of drug administration. Additional limitations of animal testing are based on intrinsic species-related genetic and physiologic differences between rodents and humans leading to the development of improper therapeutic strategies. As a result, efforts to develop new drugs based on data derived from animal models suffer from unreliable transition of pre-clinical rodent data to clinical application. However, due to the lack of alternatives and, in the light of regulatory requirements, animal testing has become the model of choice for a number of medical research areas despite its limitations. As alternative to animal models cell-based in vitro assays are considered more reliable because cellular responses provide a better understanding of both the physiology of the drug target, as well as the pharmacological interaction. 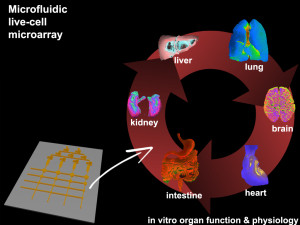 Therefore, during the last decade microarrays of living cells have been exceedingly used to perform medium- and high-throughput analysis of cell populations in the fields of toxicology, pharmaceutical compound screening, tissue engineering and regenerative medicine. Although studying in vitro cell cultures is an essential aspect of cell biology, its technological advancement has fallen dramatically behind compared to progress made in the fields of genomics, proteomics and high-throughput testing of biochemicals. To date, progress in the live-cell microarray field is predominantly accomplished by expanding the biological complexity from single cell and mutli-cell to three-dimensional spheroids that resemble tissue like structures normally found in the human body. In recent years, these three-dimensional cell culture systems have gained increasing interest, because these miniaturized tissues have shown to behave like their in vivo counterparts with respect to organo-typic physiology and functionality. However, to date no technological solutions exist that allow automation, standardization and miniaturization of cell-based assays to ensure high degree of reproducibility by simultaneously reducing manual labour steps, material costs as well as sample and media requirements.

The global trend towards automation, miniaturization and integration has therefore promoted the development of miniaturized cell culture and analysis systems employing micron-sized perfusion chambers, so-called microfluidics. Initially the main reason for miniaturization was to enhance analytical performance, but the reduction of size also presented the advantages of reduced consumption of reagents and the ability to integrate separation and monitoring techniques within a single device. Microfluidics is therefore considered a potential candidate to provide the next generation of cell analysis tools capable of inexpensively testing large numbers of single cells, small numbers of cell populations and synthetic tissues in environments of increased physiological relevance. For example, in our lab we have recently established various microfluidic tissue models including the synovium, midbrain and placenta to study the onset and progression of rheumatoid arthritis and Parkinoson’s disease as well as the transfer of compounds and materials through the placental barrier from the maternal to the fetal circulation system. These microsystems can be used to screen pharmaceutical compounds (e.g. lead optimization), to evaluate novel drugs, to improve medical diagnostic and to study in vitro tissue constructs – to name a few application areas. The main advantage of combining microchip technology with cell biology is that spatial and temporal control of cell growth and stimuli can be readily accomplished by combining surfaces that mimic complex biochemistries and geometries of the extracellular matrix with microfluidic channels that regulate the transport of fluid and soluble factors. Another major benefit of using microfluidics for life science application is the integration of biosensors, which enables the development of high-sensitivity, real-time cellular analysis technologies necessary for process and assay automation. What remains to be seen is whether biologists, biomedical researchers and clinicians will adopt such disrupting technology, thus fostering its translation as a competitive alternative to state-of-the-art 3D cell culture systems for cell-based products and therapeutics. Finally, although the use of animal trials is still required by regulatory agencies in an effort to avoid complications in human lives, western societies ethically condemn the same practice for obvious reasons. Economical devices which can simulate native tissue and its respective diseases are not likely to fully alleviate this conundrum, although with today’s microfluidic technology, one can begin to envision an era of biomedical research that is not only financially responsible, scientifically enabled, but also ethically responsible.