Among adult organs, the liver is unique in its intrinsic ability to regenerate after injury through the proliferation of fully differentiated cells. Hepatocytes, which are the most abundant type of cells in liver, are quiescent and rarely divide in healthy adult livers, but they re-enter the cell cycle and proliferate to replenish the loss of liver mass upon liver injury. Due to their exceptional regenerative ability, hepatocyte biology has been the focus of many studies. Currently, the surgical removal of liver mass, known as partial hepatectomy (PH), is well-studied and has a valuable animal model for investigating liver regeneration. When two-thirds of a mouse liver is removed, the remaining liver recovers its original mass within 7 days. However, it is still unknown how liver entirely regenerates normal liver architecture, despite many researchers long-term study of the liver regeneration mechanism. 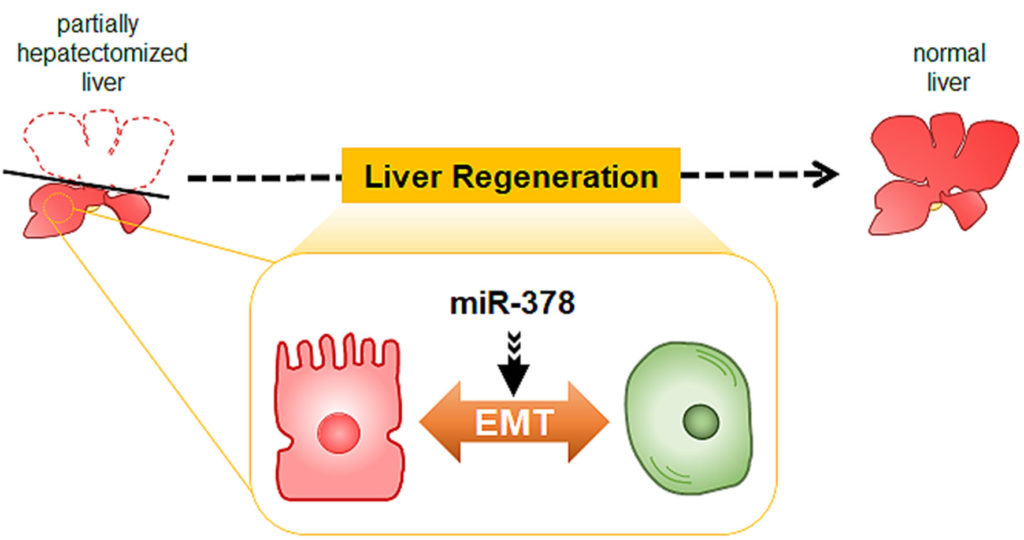 Epithelial-to-mesenchymal transition (EMT) is a biological process whereby epithelial cells lose their polarity and cell-cell adhesion while gaining the ability to migrate and proliferate. EMT plays an important role in development in adult tissue remodeling and cancer metastasis. In chronically damaged livers, hepatocytes undergo EMT to escape destruction by TGFb. It was recently reported that hepatocytes have transiently decreased levels of mature hepatocyte markers and increased expression of EMT-promoting factors, such as Yes-associated protein 1 and Gli-Krüppel family member 2 (Gli2), during the post-PH replicative period. These findings indicate the transdifferentiation of hepatocytes during liver regeneration, but it is unclear how hepatocyte fate is regulated during this process.

The hedgehog (Hh) is a classic morphogen for regulating the cell fate during embryogenesis/development. It is re-activated to orchestrate tissue reconstruction in the wound healing response of the adult liver. In chronically or severely injured livers, Hh signaling mediates EMT in hepatic stellate cells (HSCs) and immature ductular cells. Binding of Hh ligands to their receptor Patched releases Smoothened (Smo) into the cytoplasm, and cytoplasmic Smo translocates Gli families (Gli1, Gli2, Gli3) into nucleus, where they activate Hh target genes. Although mature hepatocytes in healthy adult livers are non-responsive to Hh signaling, hepatocytes in damaged livers activate it. In the liver of rodents, the Hh expression also increases following PH; however, the role of Hh pathway in regenerating the liver is largely unknown.

MicroRNAs (miRNAs), a class of small non-coding RNAs, bind to their target mRNAs and inhibit transcription. MiRNAs participate in diverse biological processes, including cell growth, proliferation, differentiation, and apoptosis. Dysregulated miRNAs are involved in the pathogenesis of liver disease. Of the many miRNAs, we reported that miR-378 is involved in HSC activation by regulating its target Gli3 during liver fibrosis. Given that Hh signaling is associated with EMT in hepatocytes and HSCs in the liver-repair process, it is possible that miR-378–mediating Hh signaling influences the EMT of hepatocytes in regenerating livers after PH. Hence, we investigated whether and how miR-378 is involved in hepatocyte transition during this process. In PH mice, we show that proliferative hepatocytes undergo EMT with a decrease of miR-378 and an increase of Hh activators, Smo and Gli3. Depletion of Smo in hepatocytes suppresses their EMT and delays liver regeneration after PH, indicating that Smo is critical for regulating hepatocyte EMT during liver regeneration. The miR-378 inhibitor also promotes hepatocyte EMT by activating the Hh pathway, whereas miR-378 mimic suppresses hepatocyte EMT and impairs liver regeneration after PH by inhibiting Hh pathway, suggesting that miR-378 impacts hepatocyte EMT by regulating Hh signaling in regenerating the liver (Fig. 1). Therefore, these findings demonstrate that miR-378 is an important regulator for hepatocyte transdifferentiation in the regeneration of livers.