There are currently an estimated 1 billion migrants globally, with trends increasing dramatically. Migrants have higher rates of physical and mental illness than their non-migrant counterparts due to multiple stressors experienced before, during and after migration (Fig. 1). Migrant women who are pregnant or have recently given birth may be especially vulnerable due to the unique social and emotional challenges of becoming a mother in a country that is not one’s own. Left untreated, mental disorders in pregnant and post-partum women can be serious and long-lasting, affecting relationships, families, children, and wider society. 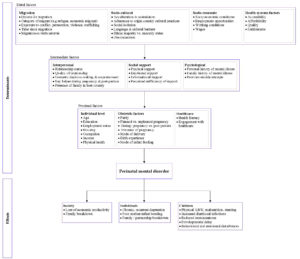 Fig. 1. Summary of causes and consequences of perinatal mental disorders among migrant women.

We aimed to provide an overview of migration and perinatal mental health. We carried out a systematic search of the literature to identify all studies looking at the mental health of migrant women during and after pregnancy. We included refugee, asylum-seeking and migrant women who originated from low- and middle-income countries. Our objectives were to assess how common mental disorders are within this group, what the risk factors are, and whether any interventions have been shown to work.

Forty-five studies met our search criteria, including a total of almost 8,000 migrant women. The majority of studies focussed on depression, with only a small number looking at anxiety and post-traumatic stress disorder and none focusing on psychotic disorders. Only two studies explicitly included refugee or asylum-seeking women. Of the studies that included a non-migrant comparison group, the majority found higher rates of mental disorders in the migrant group. All studies were conducted in high- and middle-income countries, with North America, Europe and Australasia the most heavily represented.

We combined the results of studies assessing the prevalence of depression to give an overall (pooled) estimate. The combined prevalence was 31%, suggesting that one in three migrant women experiences depression during pregnancy or following childbirth. Rates did not differ according to whether women were pregnant or post-partum, region of origin, or whether they were migrants, refugees or asylum seekers. Two factors were found to be significantly associated with depression: a previous history of depression and poor social support were both associated with a higher risk of depression. There were insufficient studies assessing anxiety and other mental disorders to assess how common these disorders are or whether they are associated with the same risk factors as depression.

In conclusion, our review reveals a number of important ﬁndings. Depression during pregnancy and post-partum is a major problem among migrant women, affecting as many as one in three. With few exceptions, studies showed that migrant women experience higher rates of depression than their non-migrant counterparts in the destination country. Previous depression and poor social support were strongly associated with higher rates of perinatal depression, consistent with ﬁndings from non-migrant populations. Our review also highlights important evidence gaps. Although we identiﬁed a large body of evidence on migrant perinatal mental health, the breadth of this evidence is limited. Only two intervention studies were identiﬁed, refugee and asylum-seeking women were under-represented and not a single study was conducted in a low-income setting.

A better understanding of migrant mental health is a priority given the rising numbers of women on the move, the vulnerabilities women face during the perinatal period, and the serious and long-term negative consequences of perinatal mental disorders on women and their children. Pregnancy represents a period of increased contact between women and health services, providing a valuable opportunity to identify and support at-risk women. It should be the responsibility of all health and allied professionals to ensure migrant women with mental disorders are identiﬁed and appropriately supported across the individual, family, community and societal spectrum.