After World War II, a sharp increase in demand for beef and dairy products, coupled with a burgeoning veterinary pharmaceutical industry, led to a number of changes in animal husbandry, including a reliance upon exogenous hormones to enhance production. To enhance meat production, an implant containing an anabolic androgen, such as trenbolone or testosterone, and an estrogen, such as estradiol, is used. While there are no steroid implants that have been approved by the dairy industry, cows are often injected with recombinant bovine somatostatin (rbST), a water soluble protein, to enhance milk production.

rbST can be detected in commercial milk, however, the levels of bST are not significantly higher in milk obtained from rbST-treated cows relative to untreated cows. Furthermore, there is no direct evidence that suggests that that bST is active in humans. Both natural and recombinant forms of bST stimulate milk production by increasing levels of insulin-like growth factor (IGF1), which in turn promotes proliferation of somatic cells associated with milk production.  Several recent studies have observed a potential interplay between milk consumption and elevated risk for prostate cancer. It is unclear however, whether this effect on IGF production is attributable to the ingestion of milk steroids (e.g., progestins and estrogens), peptide hormones (e.g., rbST and IGF-1) or a combination of the two along with other milk constituents. The poor uptake, low concentration and rapid metabolism following ingestion of IGF1 and rbST do not support that these hormones pose a serious health risk to humans consuming dairy products.

Growth enhancing chemicals used by the beef industries are generally lipid soluble and are resistant to metabolic deconstruction. Consequently, these chemicals can be bioavailable to individuals that consume them. Beef contains significant amounts of fat, and steroids will accumulate within these foods. Furthermore, as the fat content of the meat increases, the concentration of steroid is also likely to increase. The same is also true for milk, such that whole milk containing 3.5% fat is likely to contain more steroids than milk with a lower fat content. The propensity for whole milk to carry steroids in solution is part of the reason why exogenous steroids are not used by the dairy industry. It is likely that traces of endogenous and exogenous steroids can be found in beef, while endogenous steroids can be found in milk.

The concentration of endogenous estrogens and progestogens in whole milk generally exceeds the concentration in beef by anywhere from approximately 5-fold for 17β-estradiol to over 180-fold for estrone (Fig. 1). The concentration of steroids found in finished dairy products is comparatively small relative to the endogenous production of the same steroid hormones in the human body; yet there remains a potential for low-dose effects following long-term exposure through ingestion. 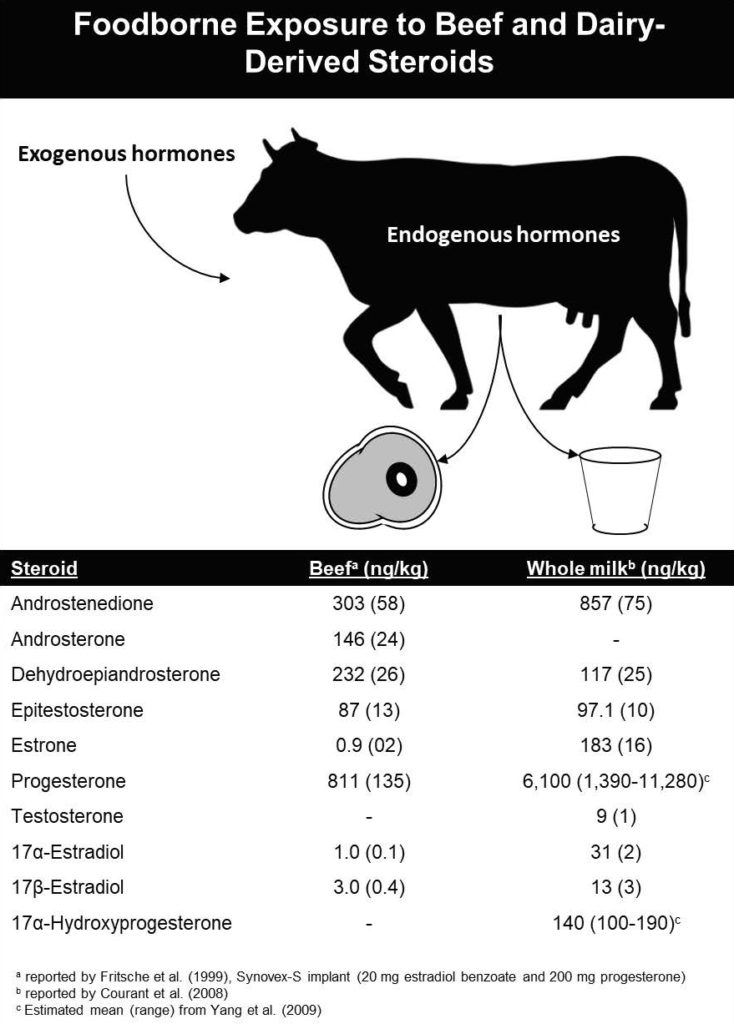 While the concentration of steroids in beef generally tend to be much lower than those in milk, there is at least one specific condition when beef-associated steroids become a health concern, and that would be when implantation practices are done haphazardly. In a small, but significant, number of uncooperative cattle, the pellets can be inadvertently implanted in other parts of the body, particularly the shoulder. In these very rare situations, individuals eating meat that was in close conjunction to the implant site, may receive considerable doses of steroid.

The Fate of Synthetic and Endogenous Hormones Used in the US Beef and Dairy Industries and the Potential for Human Exposure.
Kolok AS, Ali JM, Rogan EG, Bartelt-Hunt SL
Curr Environ Health Rep. 2018 Jun