Critical to life on earth is the ability of proteins called enzymes to catalyze a wide range of chemical reactions, such as producing essential molecules by breaking down food in humans, and producing oxygen from water in plants. Enzymes are composed of one or more polypeptide chains, consisting of hydrogen, carbon, nitrogen, and oxygen, that fold into specific three-dimensional shapes. To perform their function, enzymes often also contain bound metals that serve to catalyze a specific reaction. The catalytic abilities of bound metals are critically dependent upon the electronic structures of the bound metals and characteristics of the surrounding protein environment, but for many metalloproteins the specific contributions of these factors to the protein function are still unresolved. In particular, the ability of natural enzymes to efficiently and repeatedly perform multiple electron transfer in chemical reactions remains a challenge to replicate in artificial systems due to the complex nature of the environment experienced by metals in proteins. One approach to investigate these factors is to create sites in artificial proteins that bind metals, providing the opportunity to manipulate specific ligands and potentially create new enzymatic reactions. Previously, DeGrado, Dutton, and coworkers have shown that artificial proteins called four-helix bundles provide a robust system for binding of reactive cofactors. In our work, artificial proteins were created based upon four-helix bundles, in which the protein has four long helices aligned in parallel and packed tightly together (Fig. 1). 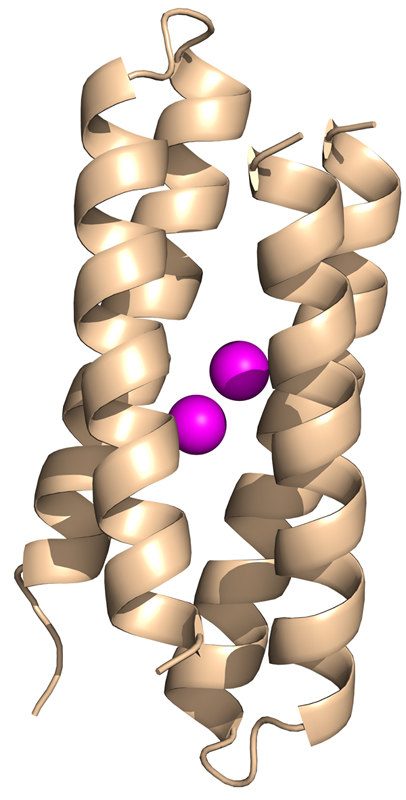 In addition, the artificial proteins were shown to participate in electron transfer reactions involving a natural protein, the bacterial reaction center. The ability to bind to the bacterial reaction center and transfer an electron is suggestive of evolutionary pathways for the development of oxygenic photosynthesis that are proposed to be triggered by the incorporation of a manganese binding enzyme. The results support the hypothesis that the incorporation of a natural manganese-containing enzyme by ancient photosynthetic organisms, which had been only capable of performing photosynthetic reactions in oxygen-free environments, led to a modified protein that subsequently evolved to oxidize water and release molecular oxygen, resulting in an atmosphere rich in oxygen.

This work was supported by funding from the National Science Foundation (CHE 1505874).