Minute exocrine glands in the compound eyes of water strider

Epidermis of insects are covered with sensilla (sensory receptors) and exocrine glands, which are responsible for sensing and interacting with the external environment. Exocrine glands secret chemicals, such as pheromones, lubricant and noxious substances, to the outside world via pores on the surface of the cuticle. These pores are small in size but tremendous in quantity, and could be found nearly all part of

Fig. 1. One compound eye of the water strider and the detailed structure of three NS.

Here, we describe a novel interommatidial exocrine gland found in the compound eyes of the water strider Aquarius remigis. The pore region of the gland is characterized into a hollow “nail-headed” structure (NS). It is like a spray head mounted on one end of a pipe, only much smaller. The NS is 2 μm long and the opening pore is just 0.5 μm in diameter (Fig. 1). 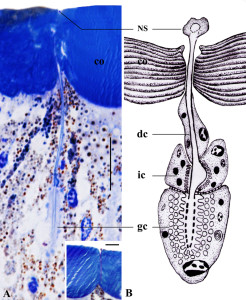 Fig. 2 (A) Longitudinal section of the gland showing its internal structure. Inset in A shows the NS. Bars: A = inset in A = 10 μm. (B) Schematic diagram of the gland. co, cornea; dc, duct cell; gc, gland cell; ic, intermediary cell; NS, nail-headed structure

We found that no musculature or blood vessels are around the gland, which raise the question: what force drive the secretion forward in the canal? The gland cell forms a large number of finger-like projections (microvilli) circumferentially surrounding the other end of the canal. These microvilli are able to contraction due to the present of actin and myosin filaments. Coordinated contraction of these microvilli may generate a pumping pressure to push the secretion through the duct and out of the gland.

Unfortunately, the actual functions of the secretion produced by this gland is unclear. However, given the peculiar site (compound eyes) they are located, it is likely that they produce anti-fungal and anti-bacterial materials that keep the clarity of the eye surfaces.